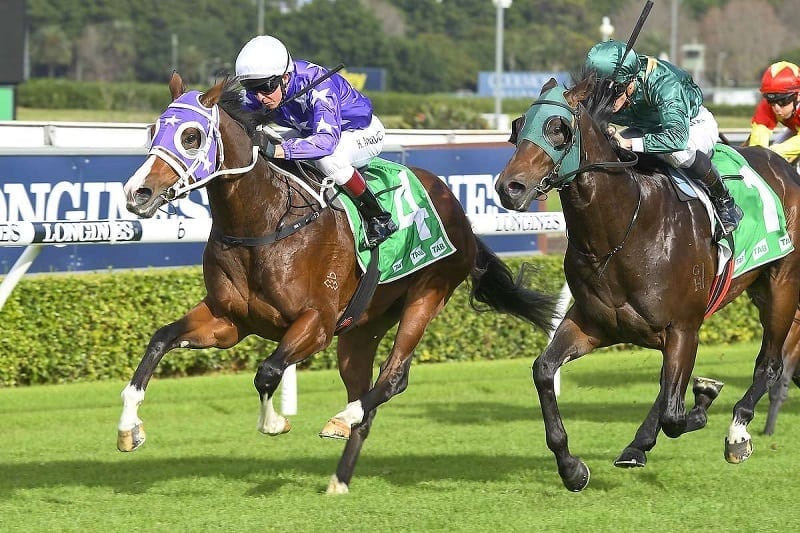 Punters got their first look at the new crop of Sydney two-year-olds on Monday morning with nine trials on the Kensington track at Randwick. Our Sydney form analyst has run his eye over them in search of some potential contenders in the Breeders’ Plate and Gimcrack Stakes, which are to be run on Epsom Handicap Day on October 2 at Randwick. The track was rated a Soft 5.

Kibou (Maurice x Fortiche) was a nice winner of the opening trial but was ridden to do so. After being scrubbed up out of the gates, he led and then kicked away in the straight to win by three lengths for Gai Waterhouse & Adrian Bott. Stablemate Ferrari Man (Menari x Iron Mizz) was wide early and stuck on gamely for second, while Dirty Merchant (Merchant Navy x Onemorezeta) was very green between runners and chased very hard at the end of the trial under James McDonald. We are following Kibou and Dirty Merchant from this.

Kacy Fogden’s filly Wild Botanica (Spieth x Colosimo) had the benefit of trial experience after a go at the Gold Coast on September 6, but she did well nonetheless to show speed early, find the front and then fend off the fast-finishing Okami Miss (Shalaa x She’s Our Choice), all in quick time. Pantonario (Not A Single Doubt x Rhodamine), a $750,000 yearling purchase, showed good speed early and stuck on well for third, with the lead trio putting a big margin on the fourth horse. We are keen to follow the first three fillies past the post, with Pantonario likely to be the best of the three with a bit of time under her belt.

They weren’t out to break any speed records in the third trial of the day, but million-dollar colt Psychiatrist (Exceed And Excel x Sanity) was able to lead all of the way under relatively light riding from James McDonald. Psychiatrist was a touch green when he was first put under pressure in the straight, but he still held off Narnia (Not a Single Doubt x Magic Nera) and One Reason (Capitalist x Otsanda). One Reason missed the start by five lengths and let down very nicely down the outside to finish third, while Narnia got a cushy run behind the leader and only just missed on the line. The times weren’t anything flash, but One Reason will be one to follow given how well he ran home.

Coolangatta (Written Tycoon x Piping Hot) was a dominant winner of the fourth trial under almost zero riding from James McDonald, running home in 33.66s. Cholante (Choisir x Volante) led the field and faded quickly, while Wild Calm (American Pharoah x Koonoomoo) made up some good ground from the back to run second, some 3.25 lengths behind the winner. Coolangatta could have gone quicker if she needed to, with McDonald just looking after the Maher & Eustace-trained filly. She looks to be the one in the Gimcrack Stakes.

Victory Moments (Spieth x Tris) gave first-season sire Spieth and Kacy Fogden a double at the trials on Monday morning, winning in impressive fashion under Tim Clark. He jumped well, found the front and was shuffled back towards the tail before letting down swiftly to race up on the outside and win by 1.75 lengths. Chris Waller’s Zambezi River (I Am Invincible x Zamzam) was a $1,150,000 yearling purchase at the Inglis Easter Sales and ran a promising second after racing keenly throughout the trial. The winner might be a pretty smart colt.

Deep Expectation (Deep Field x Iltizaam) settled behind the leader on the fence and was pushed along under Kathy O’Hara to win by a nose over Mumbai Jewel (I Am Invincible x Mumbai Rock). The time was the slowest heat to be run so far, and the field was fairly well compacted at the end, so nothing really stood out here. It is unlikely that we’ll see any of these fillies figuring in the Gimcrack Stakes in a fortnight.

A field of five contested the seventh trial, and while they ran the slowest time of the morning, we think these boys might be the most progressive in the long run. Resonator (Brazen Beau x Dejavu Rock) jumped best of all, found the front and held off the challenges to win it. Calico Jack (Merchant Navy x Shrill) stuck on gamely for second, while Trapeze Artist’s full brother Master Showman (Snitzel x Treppes) was probably the best trialist here, running third on the outside under no riding from Josh Parr. Master Showman is the one we want to follow from this heat.

Merchant Navy stamped himself as one of the leading hopes to take out the first-season sires title with a couple of handy trialers on Monday morning, including Drisana (Merchant Navy x Broadband), who was one of the only horses all day to come from behind and win. The Snowden-trained filly was ridden out under Kerrin McEvoy, but she really pinned the ears back and responded to the urgings. Snitcat (Snitzel x Jellicles) showed good speed to lead and kick away from the rest of the field but wasn’t strong enough in the last 50m to hold off Drisana. The winner will be competitive in the Gimcrack off that performance.

The final trial of the morning saw $2 million colt Nobel (Exceed And Excel x Peace Force) step out for Annabel Neasham and James McDonald, and while he went well enough to run third, he was no match for Genghis Khan (I Am Invincible x Jolie Bay). The Matt Dunn-trained colt was a $460,000 purchase and was one of the more visually impressive trial winners of the morning, striding up boldly alongside Nobel and going on with the job nicely to defeat Sejardan (Sebring x Miss Amajardan). This is one runner that can measure up in the Breeders’ Plate.