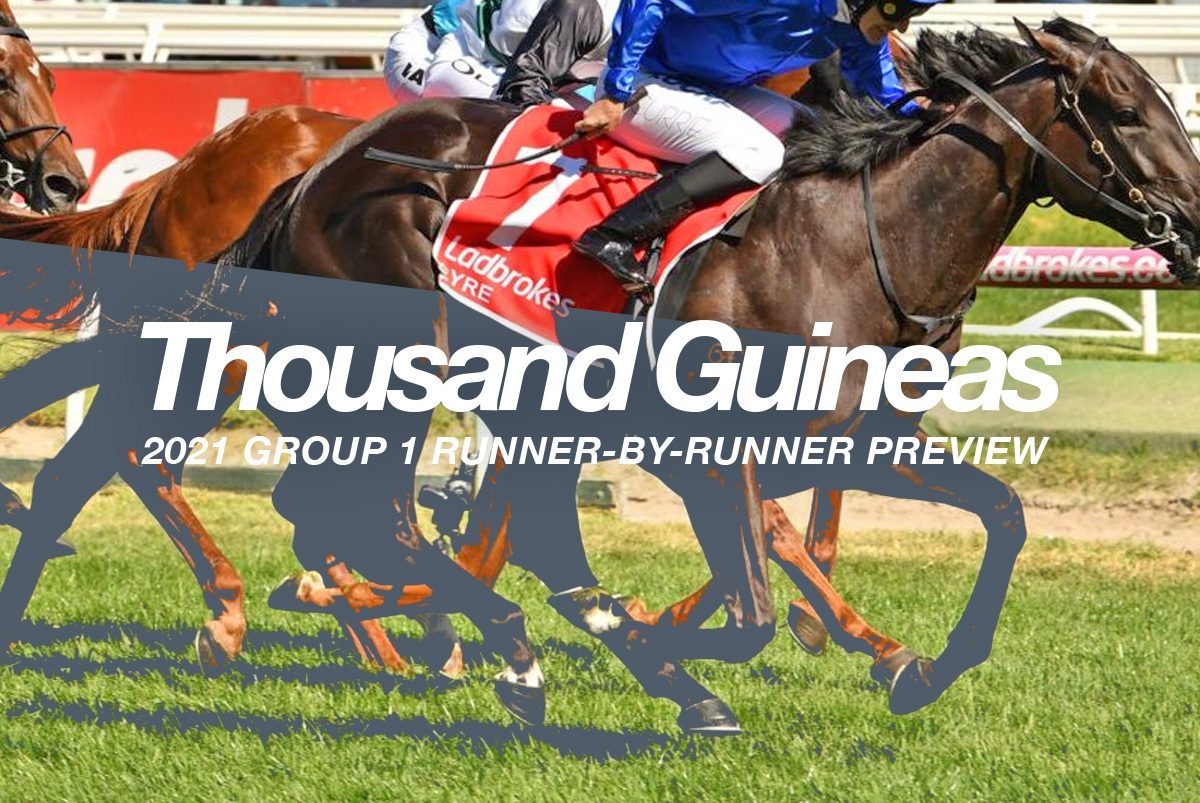 The Group 1 Thousand Guineas is the feature event at Caulfield on Wednesday afternoon, and HorseBetting’s Victorian form analyst presents his runner-by-runner preview, top selections and betting strategy. Zouzarella is a $4.20 favourite with online bookmakers, whilst the Chris Waller-trained Hinged ($4.60) will be looking to go one better than her second-place finish in the Flight Stakes.

Swift Witness will need to overturn a 2.3-length margin against Hinged from the Flight Stakes, with the filly set to take up the running under Michael Dee from barrier 12. The daughter of Star Witness has been racing in tougher events than what some of her rivals have been competing in, and considering she is set to be the natural leader, she will be a few lengths in front of her rivals when cornering. Despite this being her first time going the ‘Melbourne way’, Swift Witness commands respect and is arguably the best horse in the race at a double-figure quote, so she is worth an each-way play.

Having gone down by 0.2 lengths in the Flight Stakes, the Chris Waller-trained Hinged is arguably the one to beat on Wednesday, despite sitting on the second line of betting. The former Queenslander bounced back from a poor showing in the Listed Dulcify Stakes the start prior, before unleashing from the rear in the Flight Stakes and going oh-so-close to claiming Group 1 success. She showed that she can handle a genuinely run 1600m, and if it is a day where you can make up ground from the rear of the field, she looks set to be the one to have the last shot at the front-runners in the home straight.

The Anthony & Sam Freedman-trained Elusive Express was a smart winner of the Group 2 Edward Manifold Stakes at Flemington on October 2 and certainly cannot be dismissed here. The main query surrounding her chances on Wednesday is where she gets in the running having drawn barrier 11. Her win in the Edward Manifold saw her settled fifth with cover as she beat Yearning by three-quarters of a length. If she is afforded a touch of luck early on, she is certainly a winning hope, but with the possibility of getting trapped wide without cover, she is one we are happy to watch go around.

Having bloused the likes of Heresy and Elusive Express in the Thousand Guineas Prelude on September 18, Bon’s A Pearla shocked many when saluting at $31. Despite that win, this looks to be another step up in itself, but with the blinkers on first time she cannot be ruled out for wider exotics.

The Matthew Williams-trained Literary Magnate is one of the outsiders in the 2021 Thousand Guineas, and for good reason too. The Written Tycoon filly has struggled with the step up in grade this campaign, although she did manage to finish third in the Listed Atlantic Jewel Stakes. She will be settling in the second half of the field but will need to match motors with the likes of Zouzarella and Hinged, which is why we are not willing to risk her.

The second of the Freedman runners looks to be a clear top pick in the Thousand Guineas, despite failing to run down Queen Of Dubai in the Listed Jim Moloney Stakes. Zouzarella simply got too far out of her ground on September 25, although she showed no real signs of weakness. From barrier two under the in-form Brett Prebble, we expect to see the Zoustar filly settle one or two pairs closer than what he did at Sandown. She looks to be screaming out for the mile, and with a well-rated steer she should be finishing better than the rest of her rivals.

Heresy will be looking to add the Thousand Guineas to the Godolphin trophy case alongside Anamoe’s success in the Caulfield Guineas. Having raced three-wide without cover in the Prelude, she was left vulnerable over the final 50m and went down by a half head on the line to Bon’s A Pearla. She draws barrier one on Wednesday and with Damien Oliver on board, look for her to be running on late her. Heresy is yet to miss the top three in five career starts and on pure ability demands respect here. We have her in our top four selections, but whether she can trouble Zouzarella and Hinged remains to be seen.

The second of the Waterhouse & Bott runners is the Jim Moloney Stakes winner Queen Of Dubai, who turned the tables on Zouzarella last time out. Having been beaten by her rival in their past two encounters, the Pride Of Dubai filly managed to steal a winning lead with 200m to go and couldn’t be run down. With more runners looking to fight it out for early supremacy, she will not get it as easy as she did at Sandown, and on that basis alone, it is hard to have her here.

Yearning from the Team Hawkes yard was given the run of the race in the Edward Manifold when going down to Elusive Express. She went stride-for-stride with her rival over the final 200m and simply could not match Elusive Express over the final 50m. The 1600m may be a query and is another we are not giving much of a chance in this.

The favourite for the VRC Oaks, Barb Raider, was a late acceptor into the Thousand Guineas field having strung together consecutive victories. She was a dominant winner in the Oaks Trial when settling off the leader’s heels and kicking clear over 1800m. This looks to be a bit of a smash-and-grab type of job en route to the 2500m of the Oaks. She draws barrier three on Wednesday and Craig Williams will look to give her the run of the race. However, with a run at 2500m next up, could the 1600m be a touch too sharp for this stayer?

The Greg Eurell-trained Cuban Link is one who has made her way through the grades since debuting on the Pakenham synthetic on August 27. Since then, she has strung together two wins at Cranbourne and then Flemington, but this looks to be a step too far in her career and $51 seems an appropriate price.

The Lee & Cherie Curtis-trained Achira broke her maiden last time out at Goulburn on September 25 when leading all the way. Prior to that she had struggled to make much of an impact behind Glenagles, Giannis and Tiger Of Malay. The $151 seems the right price.

The Daniel Bowman-trained Fortunate Kiss has chased home the likes of Ingratiating, Enthaar and Zouzarella throughout her career and has respectable results alongside her name. She finished fifth behind Queen Of Dubai in the Jim Moloney and looked like she was screaming out for the 1600m. If she can get the right run in the race, she could present some value at a nice each-way price.

Zouzarella has been our tip a long way out, and with a genuine tempo expected she should get the race run to her liking. She simply got too far back in the Jim Moloney and still managed to finish within a length of Queen Of Dubai. The 1600m should suit her down to the ground, and with Brett Prebble in the saddle, we expect her to be too hard to hold out. Swift Witness is the one we want to be with at an each-way price, as she looks to be one who can settle outside the leader, kick clear in the home straight and steal a race-winning lead.