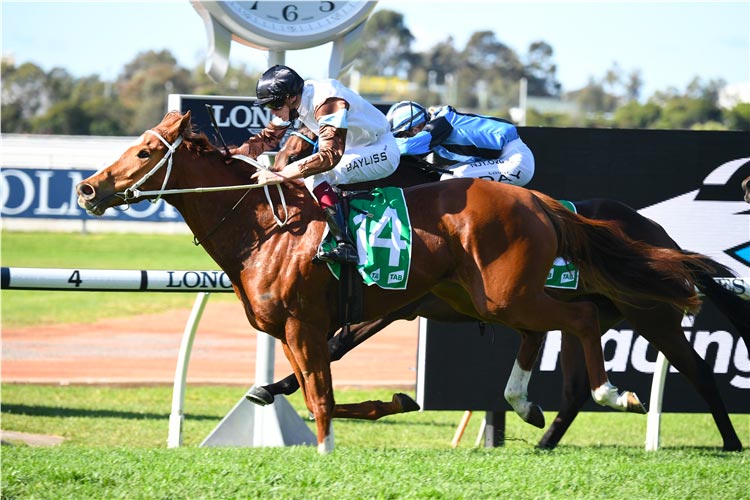 “Wonderful, tough, honest” – they were the three words that winning trainer Gayna Williams used to describe Zoo Station, who booked her spot in April’s $500,000 Country Championships Final with a win in the Mudgee qualifier on Sunday.

Sent out as a $2.70 favourite, the mare did just enough to fend off the challenge from her stablemate Tags, who was steaming home after missing the start.

Now a five-time winner from just 11 career starts, the five-year-old daughter of Animal Kingdom has taken her career earnings beyond $200,000 and looks to be a live hope in the final on Day 1 of The Championships at Royal Randwick.

Williams was full of praise of her stable quinella, as the pair now head to the big one in one month’s time.

“They went great, they tried very hard, very genuine horses, both got plenty of ability,” she told Sky Racing.

“She’s a wonderful, tough, honest mare – all she wants to do is be a racehorse.

“We had planned today to have her fresh for this because she likes to race fresh.

“Nothing fazes her; you feed her, you work her and she sort of says ‘what next?’ – that’s her attitude.”

Punters who took the $2.70 about the favourite had to hold their breath for most of the race, but jockey Anthony Cavallo revealed afterwards that riding for luck was part of his plan.

“I had one thing in my mind, I was watching races all day today and was on a couple of them they just weren’t coming down the outside and swooping,” Cavallo said.

“I spoke to Frank and Gayna and said, ‘look, I’m going to have to try and ride her for a bit of luck’ – if you’re going good enough, they can usually make their own luck. I had to ride for a bit of luck, we poked through and she’s a courageous little bugger.

“She’s pretty tenacious – even at about the 100m mark she spotted something and half propped a bit and I thought don’t throw it away but she got going again. She deserves her place in the final.”

Zoo Station is already a city winner, having won two Highway races at Rosehill in June and more recently in January, with her only run at Randwick being completely luckless, as she climbed over the back of horses looking for a way clear.

The mare is now a three-time winner over 1400m, so the Country Championships Final will be right up her alley.

Online bookmakers have Zoo Station pegged at $9 for the final, while Tags is a $15 chance for the April 2 feature.