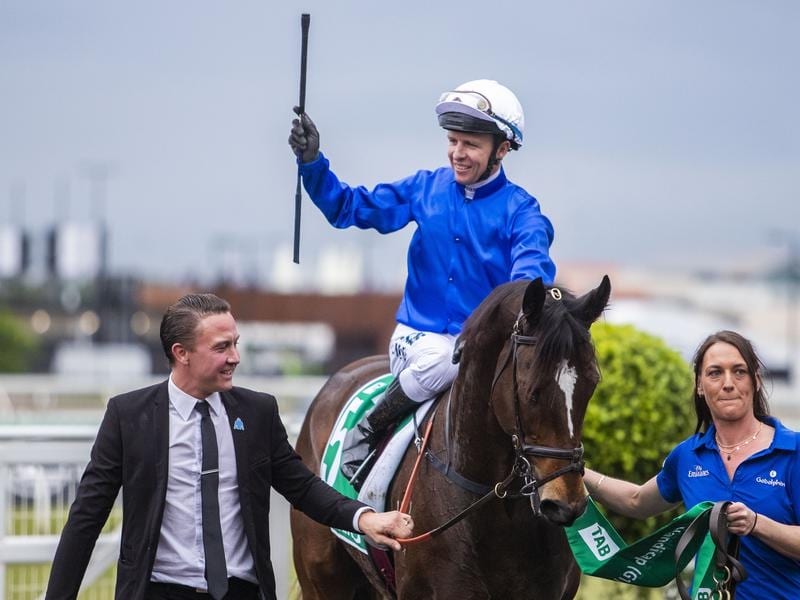 Godolphin’ has added another Group One trophy for 2018-19 with Trekking’s Stradbroke Handicap win.

Legendary trainer Bart Cummings would have been proud of his grandson James Cummings’s planning for Trekking to win the $1.5 million Group One Stradbroke Handicap at Eagle Farm.

The late Bart Cummings was noted for the way he mapped out the campaigns of his Group One horses and James Cummings has inherited the trade craft.

Bart Cummings won four Stradbrokes and James joined him when Trekking ($7) swept down the outside to beat Tyzone ($8) by 1-3/4 lengths with Endless Drama ($11) in third.

The win had historians reaching for the records when James Cummings joined his father Anthony Cummings as a trainer of a Group one winner on the same day.

“If you want to talk about preparing a horse for a race look at what Dad did in planning Prince Fawaz’s win in the (Group One) JJ Atkins earlier today,” James Cummings said.

“You can bet that when Dad won a Group One you will find Bart probably had one of the same day.”

However, there is no taking credit away from James Cummings who has been singing Trekking’s praises since the autumn carnival.

When Trekking won the Hall Mark Stakes at Randwick and the Luskin Star Stakes at Scone, Cummings believed he had a real Stradbroke horse.

“You don’t get too many chances at a Stradbroke so we didn’t leave much to chance,” Cummings said.

“I ran him in the Kingsford Smith Cup here two weeks ago to have a look at the track.

“Then he had a very good gallop on the course proper on Tuesday to get him ready.”

Trekking will now be aimed at the big races in the spring.

It was Godolphin’s second Stradbroke after Impeding won in 2017 when Darren Beadman was interim trainer.

The win added to a great season for Godolphin Australia and it was their eighth Group One win.

Cummings planned to target the winter and it was Godolphin’s sixth stakes win for the carnival.

The win also gave jockey Kerrin McEvoy a winning Group One double as he had earlier won the Atkins on Prince Fawaz.

“He is a most promising horse and you know when you get on one of James’s horses they are fit and ready,” he said.

“The fast early pace suited him and we able to come into the race when we wanted.”

Gold Coast trainer Toby Edmonds was thrilled with the run of Tyzone who proved he was Group One class.

“Gee he tried hard and I am so proud of him,” Edmonds said.

Tom Berry, who rode Tyzone, said he got a nice tug into the race behind Trekking and he thought he could win.

“But he was just a bit strong for us,” Berry said.

Leith Innes said Endless Drama had come along way in a couple of months since being transferred to New Zealand.

The favourite The Bostonian was slow to begin and was never a winning hope.

“He lost his footing at the start and that was the difference,” jockey Michael Cahill said.