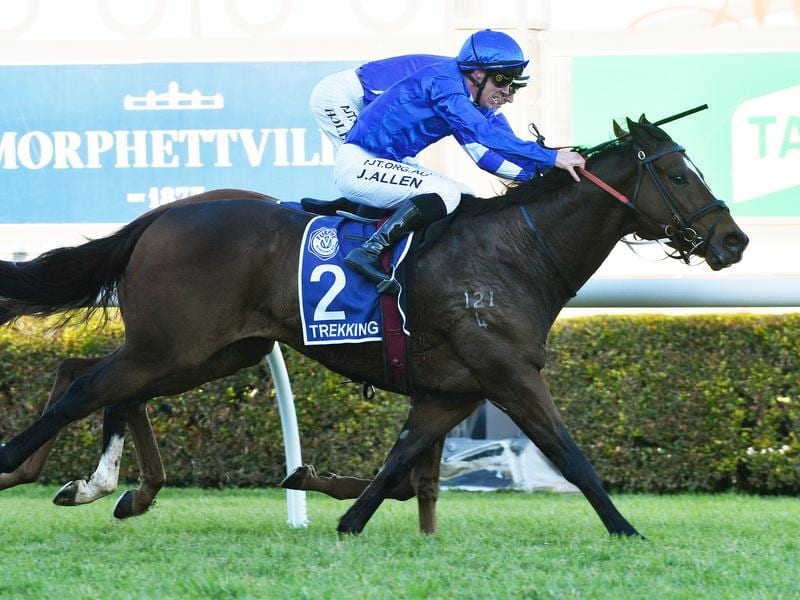 John Allen has made the most of a rare ride for Godolphin to win The Goodwood on Trekking.

John Allen’s decision to head to Adelaide for this year’s carnival has reaped another big reward with the jockey claiming his second Group One win in as many weeks, this time on Trekking in The Goodwood.

Morphettville has been a happy hunting ground for the Victorian-based Irish jockey in recent seasons, with his victory in Saturday’s 1200m feature his fourth Group One success at the course.

Allen’s other three have all been in South Australian Derbys, including last Saturday on the Danny O’Brien-trained Russian Camelot.

The James Cummings-trained Trekking ($10) was already proven at the elite level having won last year’s Stradbroke Handicap in Queensland and the five-year-old gelding showed his quality and tenacity to chase down $3 favourite Gytrash.

Group One Lightning Stakes winner Gytrash hit the front approaching the 200m but Trekking gave chase and got his head down on the line to score by a short half-head in a thrilling finish.

“This is my first time riding him but I was surprised when I got out to the mounting yard and just realised how small he was.

“But he was tough.

“We had a super run.

“The runner-up gave a really good kick. I thought when I got out we were going to catch him. He kept kicking but to my lad’s credit he really fought and put his head down on the line.”

Allen is one of several Victorian-based jockeys who isolated for two weeks in South Australia before being able to compete during this year’s carnival because of protocols regarding the coronavirus situation.

He had the opportunity to don the famous royal blue colours of the global Godolphin operation in Saturday’s race.

“I think I might have had one ride for them before around Kyneton in a maiden,” Allen said.

“It was good to get the ride today.

“It’s my first ride for him as well so it was a good start to our partnership, hopefully.”

While it was a 10th career Group One win for Allen, he took satisfaction out of it being his first over a sprint distance with the majority over 2000m and further although he won the Coolmore Legacy Stakes on Kenedna last year in Sydney over 1600m.

“I got on the right horse today and he did the job,” Allen said.

Trekking has firmed from $15 to $8 to win a second straight Stradbroke Handicap at Eagle Farm on June 6.