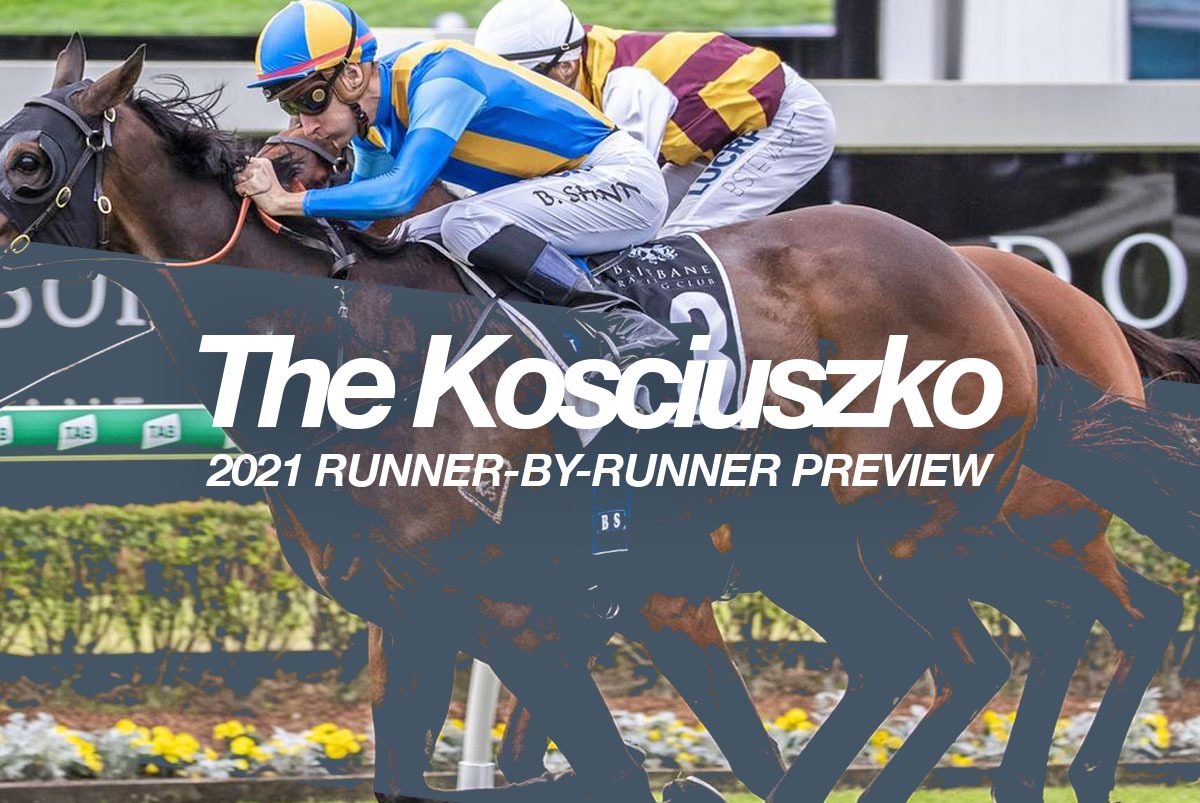 HorseBetting’s Sydney form analyst brings you an in-depth runner-by-runner guide to The Kosciuszko at Royal Randwick this Saturday. The $1.3 million race for country horses has attracted a capacity field of 14, which sees 2019 winner Handle The Truth installed as the $4.40 favourite ahead of former New Zealand galloper Edit ($5) and Country Championship Final winner Art Cadeau ($7). There will be a decent amount of speed in the 1200m event, with Nadaraja, Ceasefire, Art Cadeau and Front Page, so we will be looking for one to swoop over the top of them.

Handle The Truth will be looking to win his second Kosciuszko, having taken out the race in 2019. The Canberra-based gelding faces a big drop in class after contesting both the Concorde Stakes and The Shorts in his two runs this campaign, and he was far from disgraced in either of those races. The wet surface will be to his liking, while he should be peaking third-up. While he is a definite chance, we think he is well found in this market so far, so unless there is a significant drift, we couldn’t back him at this price.

Front Page had a decent spruik surrounding him early in his career after a 10-length win at Albury, before winning a Listed race down the straight at Flemington last June. The son of Magnus has had three runs this campaign, including a second-placed effort last time out at The Valley behind Lombardo, who has since won again at Caulfield in Saturday grade, so the form does not look too bad. Kerrin McEvoy will take him forward from the outside alley, which could be his undoing, so we are happy to watch him go around.

Art Cadeau was the winner of this year’s Country Championship Final at Randwick over 1400m in April in what was his most recent start. The Terry Robinson-trained son of Artie Schiller has been kept fresh for The Kosciuszko, as his trainer believes he is better over 1400m, so the 1200m could bring him unstuck in a race like this. That said, he has never missed the top two in three attempts over the distance, while he is undefeated at Randwick. The good alley will have Tommy Berry in the box seat on the five-year-old, which will make him hard to beat.

Plonka has been a model of consistency all throughout his 23-start career, but it has been a while between drinks for this son of Epaulette. The six-year-old has been battling at his last few starts, so he would have to improve drastically to win this. His best is good enough, but can he find it?

Coffs Harbour-based gelding Aheadofhistime has been in good form of late, winning back-to-back races on his home track before getting home well behind Genzai The Wolf at Eagle Farm on September 4. He will get back from barrier nine and should work home well enough, but we can’t see him figuring in the finish. The $61 seems about right.

Spiranac is a definite winning chance after she won brilliantly at Bathurst in The Panorama last time out, putting her rivals to the sword to triumph by three lengths. The daughter of Magic Albert has won six of her 14 starts and is a two-time winner on Soft going, so the conditions will suit. James McDonald is still searching for his first win in The Kosciuszko, so this looks his chance to do it en route to The Everest later on in the day. Drawn perfectly in barrier eight, the Rod Northam-trained mare should get a lovely run in transit and be right in the finish.

Edit caught our eye in his trials and his sole Australian run, which he won comfortably at Tamworth on September 27 despite bombing the start. Purchased by Australian Bloodstock and sent to Cody Morgan to be targeted at this race, the former Kiwi looks to have the X-factor required to win this race. He will get back from the wide alley, but that should aid his chances as he will have plenty of galloping room and be charging home out wide. He’s the one they have to beat.

Ice In Vancouver has always shown ability, winning three of his six career starts by a combined margin of over 12 lengths. The son of Vancouver finished last in this race 12 months ago, but he pulled up with issues that sidelined him for six months. The talented sprinter had two runs over the winter where he never really threatened at Randwick and Grafton respectively, so it is hard to see him turning the tables here.

Island Bay Boy is similar to Ice In Vancouver in the sense that he has been ultra-impressive in his relatively short career, winning four of his eight starts. The son of All Too Hard is trained in Queanbeyan, which is where he won his last start on August 24 by 2.5 lengths on a Heavy 8 track, so the conditions should suit on Saturday. Jason Collett won this race on It’s Me, so he knows what it takes to win a Kosciuszko. This is the biggest ask of his career to date, but he has ability and could run a big race at odds.

The sole three-year-old in the field is the Scone-based Nadaraja, who is looking for four straight victories. The well-bred son of Redoute’s Choice has led all of the way in three straight wins at Scone over 1100m, winning by margins of one length, five lengths and three lengths, so he has been dominant. Drawn in barrier two, the gelding’s regular rider will take him straight to the front again in a bid to win this race in similar style. Over the odds?

One of the more surprising slot holders is six-year-old gelding Mr Hussill. The son of Husson has never been out of the placings in six starts, winning three of those. He has a win at this track and distance, but that was in a fairly weak Highway race in July, so we have to question the form. He was beaten by Sunrise Ruby at his next start, before running second to Jerry in September. He can race closer from barrier six and give a sight, but we don’t think he is quite up to it just yet.

Ceasefire has won three of his four career starts and was the final runner selected for a slot in this year’s race, so plenty of thought went into this slot holder’s decision. The Panzer Division gelding’s only defeat did come in his sole metropolitan run when he was sent around as the favourite in a 1200m Class 3 Highway at Randwick in April, but that was at the end of his first campaign, so he can be forgiven. He won comfortably on his home track at Scone in his sole lead-up run on September 24, so he looks to have come back well, but the awkward barrier makes him tough to back.

Last year’s winning trainer will be looking to go back-to-back with a similar style of horse in Patino Ruby. The More Than Ready mare has had seven starts, winning three of those, including a dominant win at Rosehill two starts back in a 3YO Benchmark 72 on a Soft 6. The four-year-old has had one run since, finishing fourth at Randwick on September 4. She was far from disgraced on that day and will be ready to go here.

Rounding out the field is Mitchell Beer’s Sunrise Ruby. The four-year-old has had six starts for four wins and a second, including a brilliant last-to-first win at this track and trip on July 31 with Glen Boss in the saddle. The Casino Prince mare has won three races on Heavy tracks, so she will relish the conditions on Saturday, while she is set to get a terrific run in transit from barrier four on the minimum weight. At the $16, she is a brilliant each-way play.

Coming off a third to Quantico and April Rain reads well for a race against country horses, but the gelding’s form prior to that was nothing spectacular. Happy to watch.

This four-year-old started at $10 in the Country Championship Final in the autumn and ran a brilliant second, which would be good enough to see him competitive in this, but after going under as a $1.70 favourite first-up at Wagga and then losing by four lengths on the Kensington track last time out, it makes him hard to have.

The eight-year-old gelding is racing pretty well of late in the country and provincial scene, but he has never really been able to take it to the next level.

This is one runner we thought would have secured a slot, but it was not to be for the Moruya galloper. Having won back-to-back races in the winter at Moruya and Forbes before running back-to-back thirds at Kembla Grange and Warwick Farm, he would hold his own in this should he gain a start.

Best bets for The Kosciuszko 2021

We are siding with the former New Zealander in Edit to remain undefeated in Australia with a big finish for Cody Morgan. He will get the fast pace to follow, and he has a senior rider in Hugh Bowman booked. Sunrise Ruby is the one at bigger odds to have an each-way play on, while Spiranac’s dominant recent victory will see her right in the finish.