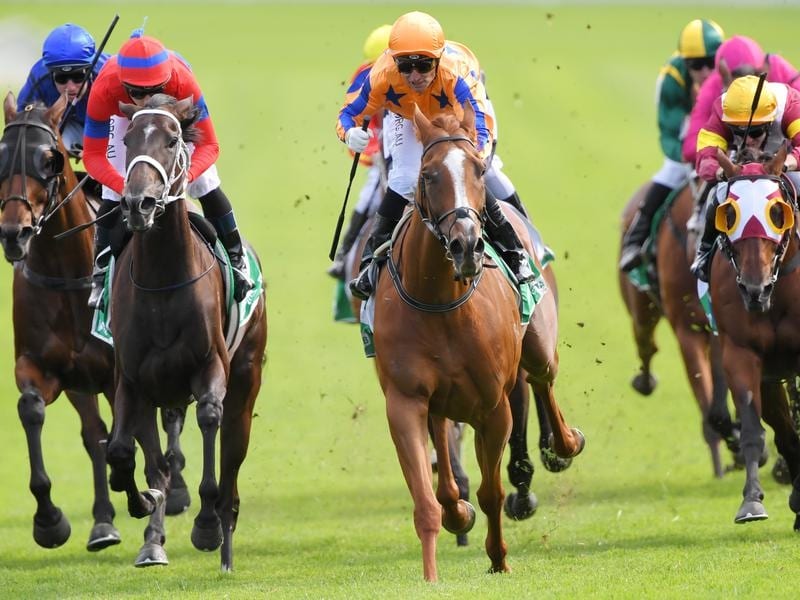 Te Akau Shark launched from back of the field for Opie Bosson to win the Chipping Norton Stakes.

New Zealand trainer Jamie Richards describes himself as a small fish in a big pond but he has left Randwick with the catch of the day, clean sweeping the two Group One races.

A race dominated by Winx for the past four years, the Chipping Norton turned into a thrilling contest with only 2-1/2 lengths covering the first seven across the line.

But it was $2.80 favourite Te Akau Shark who launched from back in the field for Opie Bosson, denying Verry Elleegant ($21) by a half-length, with Fierce Impact ($7) third.

Richards described the afternoon as his best day on a racetrack, just ahead of Probabeel’s recent history-making feat when she became the first horse to claim the Karaka Million double.

“I thought it couldn’t have got much better than the Karaka Millions double but I just think it has,” Richards said.

The trainer was reaching for superlatives to describe Te Akau Shark, whose Chipping Norton win was the gelding’s first Australian Group One.

“He can do things other horses can’t, that’s the difference,” Richards said.

“He’s something special. They didn’t go real quick early, Blake (Shinn on Dreamforce) slowed them and Tommy (Berry on Happy Clapper) clocked off and they only went steady but gee he was good late.

“I said to Opie, ‘Just don’t be as far back as you were on Probabeel’, but he ended up back in a sticky spot. But when he gets on his outside leg and he gets a bit of clear room he can really charge late.”

Richards came to Randwick knowing he had two good horses but said it was hard to be confident against stables like that of premier trainer Chris Waller.

“You can’t get too far ahead of yourself. You’re over here and a very small fish in a big pond,” Richards said.

“This horse has got a bit of arrogance about him. He’s a bit grumpy. He’s one of those horses who knows he’s pretty good.

“He’s not a fantastic eater, he’s not a big, strong horse with a big barrel on him. He’s pretty lean and mean but he’s got a big ticker.”

Bosson partnered both winners for Richards, showing tremendous patience and timing to bring the horses with winning runs.

He did not hesitate to rate Te Akau Shark among the best he has ridden.

“He’s right up there. I said that when he won the Couplands Mile, he is potentially the best horse I have ridden,” Bosson said.

“Once we straightened up and balanced I knew we were going to pick them up.”

Te Akau Shark is part-owned by rugby league great Paul Gallen, who was on hand to celebrate the win.

“What a thrill. I love a day at the races but I don’t know a real lot about horse racing. I’m just so thrilled to be here,” Gallen said.