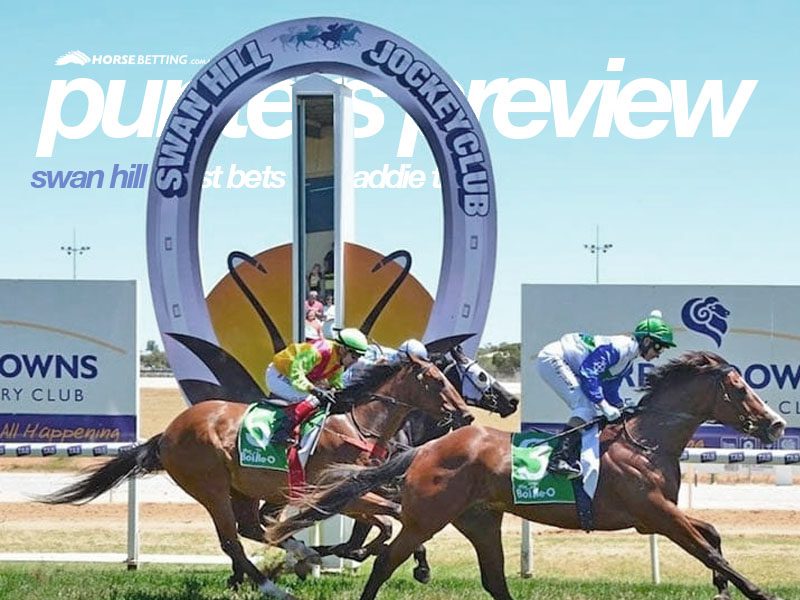 An eight-race card is scheduled for Swan Hill on Tuesday afternoon, and HorseBetting’s Victorian horse racing expert presents his best bets and free quaddie numbers for the meeting. The track is rated a Good 4, while the rail is out 4m from the 900m-400m and true for the remainder. Racing is set to commence at 1:30pm AEDT.

Our best bet of the Swan Hill card comes up in the opening event when three-year-old Miss Cheviots steps out over 1200m. The Austy Coffey-trained Street Boss filly was a touch unlucky when finishing fourth at Horsham on October 17, beaten just over a length. She was held up for a run until the final 200m and ended up being hampered when revving up over the final 100m. To only go down by that margin shows plenty of potential, and considering she chased home the smart Mynumerouno last campaign, she should take some beating here. Harry Coffey should have no issue in positioning Miss Cheviots in a handy position from barrier two, and if the pair are afforded even luck, this looks the perfect race for the filly to break her maiden in.

Nathan Hobson sends his five-year-old Northanna to back to the Swan Hill 2400m having finally found some good form in recent times. With five placings from 11 starts at Swan Hill, the Helmet mare is yet to win at the track, but this BM58 does not look to be the strongest. She has a win and two runner-up performances from her past four runs, and if she is anywhere near her best, Northanna looks to be one of the better bets on Tuesday. The in-form Jarrod Fry will look to have her settled in the first four, and as long as they do not get trapped wide in the running, we expect Northanna to have a fitness and form edge on her rivals here.

The Graham Donaldson-trained Spurge has begun his spring campaign with consecutive third-place results, and despite being an 11-start maiden, we think Tuesday will be his day. Having peaked on his run inside the final 150m when hitting the lead over the Swan Hill 975m on September 27, he should benefit from that and be raring to go third-up from a spell at the same distance. When he was third-up from a spell last time in, he managed a career-best result at this track and distance when finishing second having only been run down in the shadow of the winning post. If Jarrod Fry can boot up from barrier three and dictate terms, we expect Spurge will be too hard to run down late on.