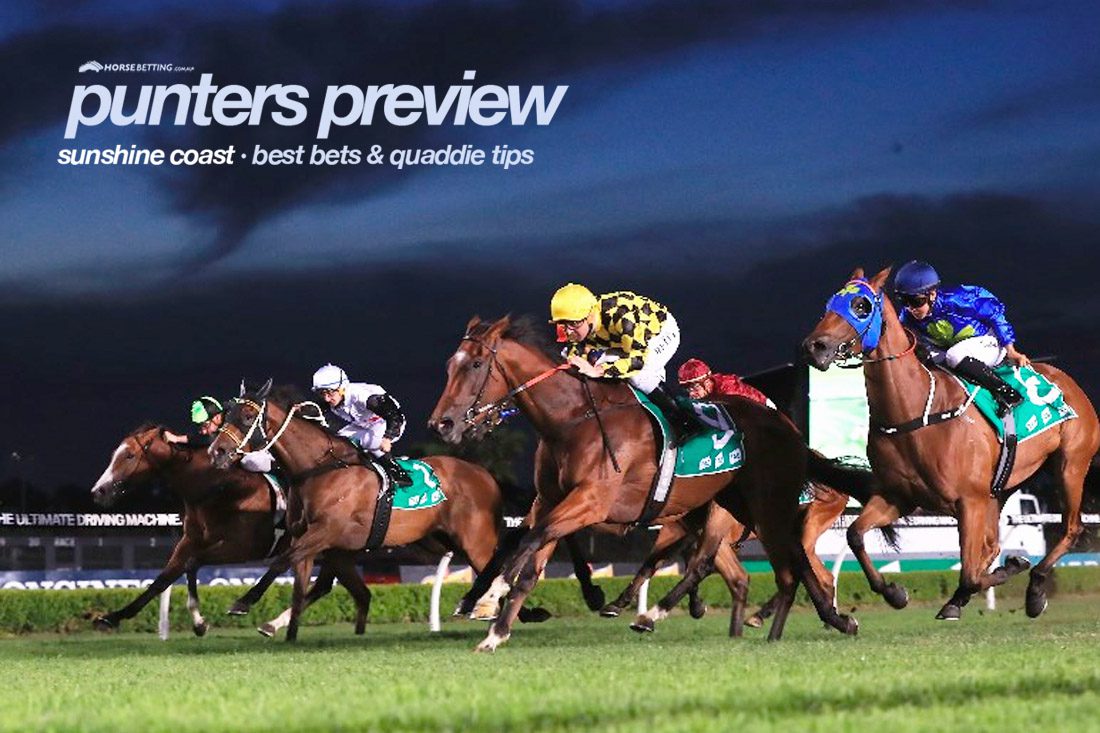 The Sunshine Coast Turf Club is scheduled to host a six-race program on Friday night, so HorseBetting’s Queensland racing expert has studied the card and picked out his best bets, free quaddie selections and top odds from the leading online bookmakers in Australia. The track is rated a Soft 5, while the rail is out 7m for the entire course, which could favour horses up on the speed, as it often does at the Sunshine Coast. Racing is set to get underway under lights at 6pm AEST.

Tony Gollan’s three-year-old filly Warrioress was disappointing on debut, dropping out to run last at Doomben on February 16 in an eight-horse field over 1110m, but we are happy to forgive her. The daughter of I Am Invincible had trialled well on two occasions prior to her debut, including a second behind impressive debut winner Canadian Dancer in late December. Gollan has applied a Tongue Tie for the first time on Friday night which will help given she seemed to choke down on debut, while Ryan Maloney goes on. Drawn well in barrier five, Maloney is likely to take Warrioress to the front and she should be hard to catch as she drops back to provincial level. The 1000m journey should be more favourable too.

As a yearling, James Harron paid $2.8 million for a colt by Snitzel, and while it did not work out for him in the slightest, Mount Fuji has been successful for Gold Coast-based trainer Gillian Heinrich who now owns and trains the four-year-old. The strapping chestnut has had two starts for Heinrich, running second at Doomben on October 13, before defying a betting drift at Ipswich on the 27th of that month to win by nearly two lengths over Laraina who has since won twice. Alannah Fancourt retains the ride after having won on the entire in maiden company, while barrier three should ensure the pair get a good run in transit for this first-up assignment. If he has improved during his spell, he should be too good for this field over the 1000m trip.

Next BestRace 3 – Mount Fuji $5 with Sportsbet

Next Best Again – Back When

Garnett Taylor and Ryan Wiggins combine in the penultimate with classy four-year-old, Back When. The son of Unusual Suspect has raced 11 times for two wins and five runner-up performances, with three of those coming at his home track. The gelding was brilliant when winning at Rockhampton on January 11, defeating Deep Breath by 1.75 lengths in an 1100m Class 1. Deep Breath has since won two races at Rockhampton by 3.25 lengths and 5 lengths respectively, franking the form of Back When. Wiggins can use the inside alley to his advantage and hold a forward spot, before hopefully finding some luck in the straight to produce the galloper. It isn’t the strongest Benchmark 65, so he can break his run of outs at this track.

Next Best AgainRace 5 – Back When $4.80 with Sportsbet