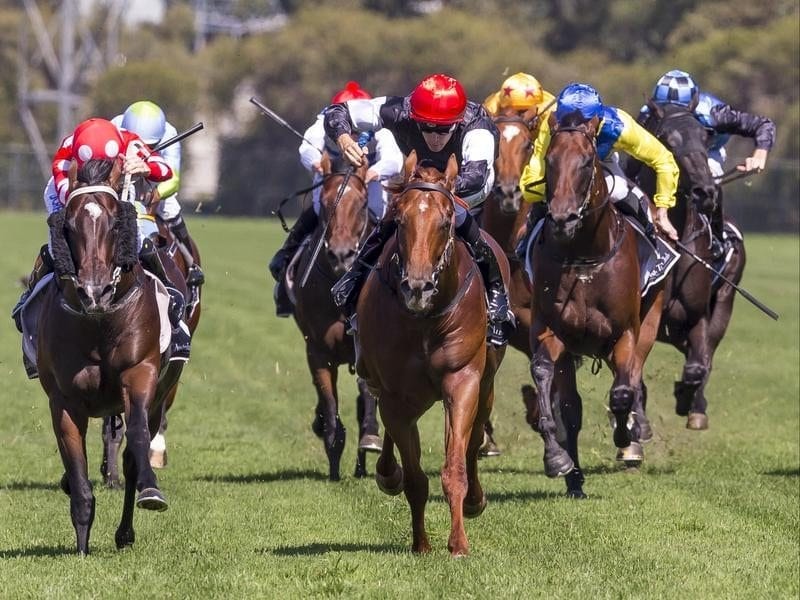 Written By is on target for the Golden Slipper after his Pago Pago Stakes win at Rosehill.

Written By has made the ideal first impression in Sydney as the unbeaten colt moved to outright second favourite for the $3.5 million Golden Slipper behind boom filly Sunlight.

The Grahame Begg-trained Written By withstood a head-to-head battle with Sandbar before edging to a half-neck win in the Group Three Pago Pago Stakes (1200m) at Rosehill.

Already assured of lining up in next Saturday’s world’s richest race for two-year-olds at Rosehill, Written By used the Pago Pago as a tune-up exercise after Tuesday’s barrier trials at Randwick were washed out.

Written By shortened from $7 to $5 to overtake the Chris Waller-trained colt Performer ($6).

“There’s certainly a little bit more to come from him next week,” Begg said.

“The second horse gave him a good go and is a pretty fair horse obviously. He can have a very easy week, we don’t have to do much with him.”

Begg was confident the best was yet to come from Written By bred and owned by his father Neville.

“He is absolutely untapped. I know once he finishes his preparation this time around and goes out for a break he’ll be a really, really serious horse in the spring.”

“He perhaps struggled a little bit going the opposite way but it should put him in good stead for next week,” the 22-year-old said.

“He’s still learning and he has got a lot of ability there. I think today will really bring him on.”

Brad Widdup was unsure whether Sandbar would back-up, providing he made the field of 16 from 19th on the revised order of entry.