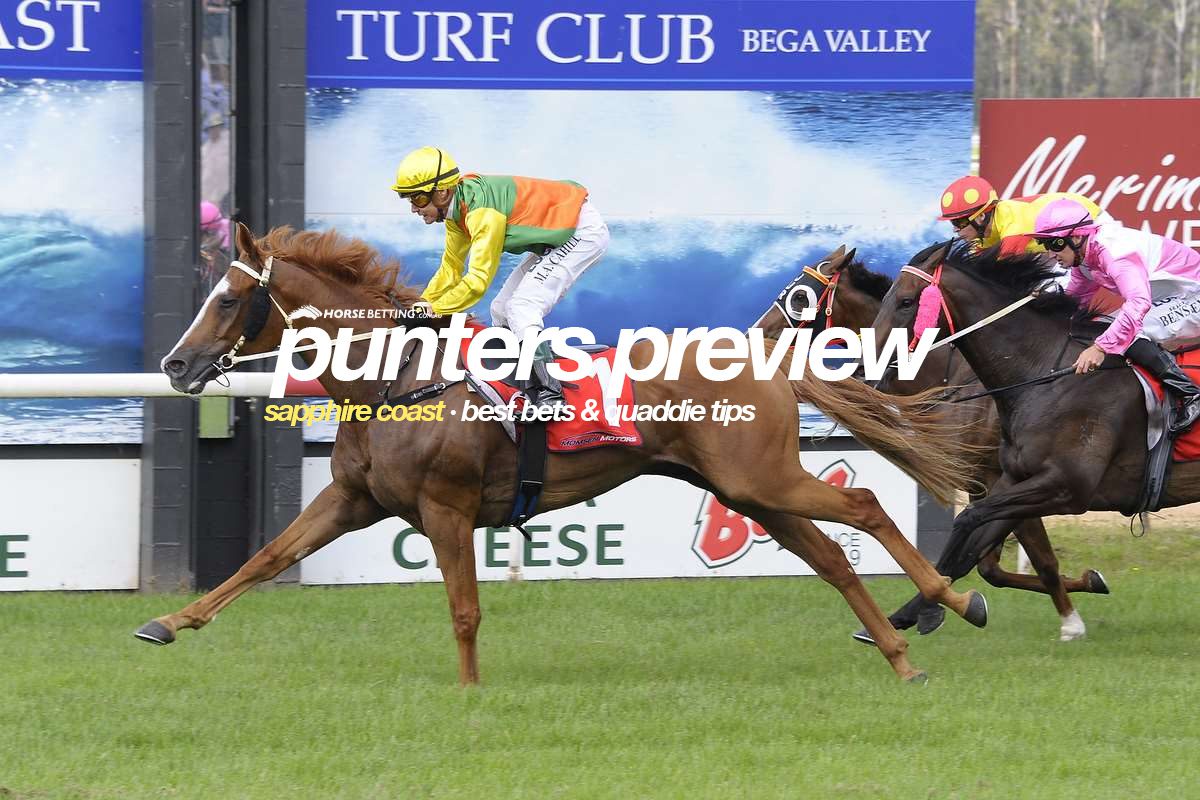 It is Merimbula Cup Day at the Sapphire Coast on Thursday, and HorseBetting’s New South Wales form analyst brings you his best bets and quaddie numbers as well as a tip in the $29,000 feature. The track is rated a Soft 7, while the rail is out 2.5m from the 800m to the 370m before the cutaway applies. The first of seven races is scheduled to start at 2:10pm AEDT.

The Matthew Dale-trained Meg looks very hard to beat in Thursday’s feature. The four-year-old daughter of Sebring has won four of her 16 career starts, including a 3&4YO Benchmark 72 at Rosehill last June, before she went to the Sunshine Coast and tackled the Group 3 Winx Guineas. Since then, Meg has only won the one race, proving to good at Canberra in December. More recently, this three-time winner on soft tracks ran 10th at Randwick behind Room Number in a Fillies & Mares Benchmark 78, before hitting the line strongly behind Testator Silens in the Nowra Country Championship Qualifier over 1400m. Amy McLucas won on this mare at Canberra, so it is a positive booking to have her back in the saddle, while she should be riding full of confidence after a winning double at Albury on Sunday. Meg will have to jump from a wide gate (7) and has to carry 61kg, but her 80 rating suggests she is capable of beating her rivals anyway.

Paul Facoory and Louise Day combine in the third race with last-start winner Prophet’s Pride. The three-year-old filly by Divine Prophet gave her rivals windburn at Queanbeyan on February 20, racing away to win by over two lengths in a 900m Maiden Plate. In her first campaign, the filly finishing in the minor money in both starts, running second at Queanbeyan in October before running third at Canberra over 1300m, where she once again hit the line strongly. The rise to 1200m on Thursday should suit her, given a number of Divine Prophet’s progeny are better over a little bit further, while there looks to be a solid tempo in this field, and that will suit her racing pattern. From barrier eight, Day is likely to go back on Prophet’s Pride and allow her to wind up in the straight and finish strongly over the top of her rivals.

Princess De Roca has always shown plenty of promise, winning three of her first six career starts, but she hasn’t been great this time in. The Joe Cleary-trained four-year-old mare resumed as favourite on January 13 at Moruya, where she finished third over 1010m on a Heavy 8 track, and then led but cut up poorly in the straight to run fifth at this track at the end of January. She has had a freshen up, gets onto a suitable soft surface, and she shouldn’t have too many issues trying to control the race from in front. We are confident that Princess De Roca can bounce back on Thursday.

Theresa Bateup’s Densaur is the type of galloper that probably should have won a race by now, despite only racing seven times. The three-year-old son of Denman has placed in four of those and not been beaten far in his other three starts. Densaur has had three starts at the Sapphire Coast, finishing in the minor money twice, while the other time that he was here saw him finish fourth in January when an even-money favourite. Last time out, Densaur was supported late as second favourite behind Regal Pom at Nowra, and while Regal Pom started long odds-on, it was Jalmari who flashed late to win it. Jalmari came out and ran second in the Canberra Guineas Preview last Friday, while Regal Pom finished third at Gosford last Saturday, franking the form out of the Nowra race. Provided he gets a nice run from barrier five – which he should – Densaur should be able to break through.