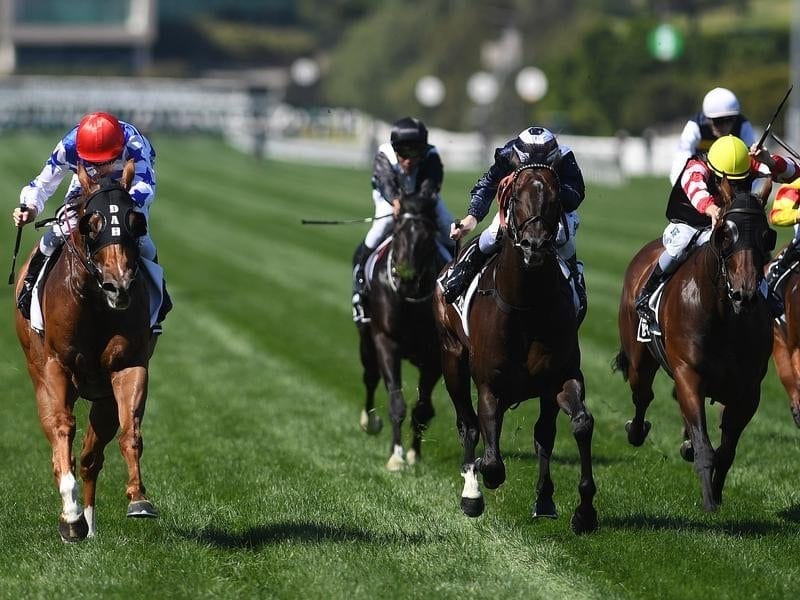 Redkirk Warrior (left) has won the $1.25m Newmarket Handicap at Flemington for the second time.

Regan Bayliss has landed an early 21st birthday present guiding Redkirk Warrior to victory in the Group One Newmarket Handicap at Flemington.

Having already booked a party for Saturday night, Bayliss has extra reason to celebrate after landing a second Newmarket Handicap.

Bayliss, who turns 21 on Tuesday, has a new rule introduced in recent weeks to thank for allowing him to ride Redkirk Warrior on Saturday.

He was suspended for 25 meetings last week in the Australian Guineas, but the nine-day deferment of suspension allowed him to ride.

Bayliss has now ridden Redkirk Warrior to three Group One wins with the imported galloper becoming the first horse to win successive Newmarket Handicaps with a Lightning Stakes sandwiched in between.

Sent off a $7 chance, Redkirk Warrior did all the bullocking work on the grandstand side of the Flemington straight course to defeat Brave Smash ($9) by a short-head on the flat side.

The $6.50 favourite Merchant Navy, also of the flat side, was a further short-neck away third.

Redkirk Warrior was the first horse in 100 years to win the Newmarket first-up when successful last year and the first since Razor Sharp in 1982-83 to win in successive years.

Bayliss said he’s grateful to have found Redkirk Warrior so early in his career.

“He’s a real warrior and I’m very grateful to be a part of his career.”

David Hayes has been associated with many great sprinters over his long career at Lindsay Park, going back to when he was an assistant with his father Colin.

Now training in partnership with son Ben and nephew Tom Dabernig, Hayes suggested Redkirk Warrior may be the best straight-course sprinter the stable has produced.

“Dad had a few of them but in my era at Lindsay Park and all the sprinters, I think he mixes it pretty well with all of them.”

Hayes said he would let the dust settle before deciding on the next chapter for Redkirk Warrior.

“We’ll have a little chat about which plan we make,” Hayes said.

“To win with topweight in a Newmarket, he’s a very special horse.”

Craig Williams said runner-up Brave Smash was gallant in defeat with the split changing the context of the race.

“I couldn’t be any more than so impressed with his performance,” Williams said.

“He won his side but unfortunately he’s just not the winner.”