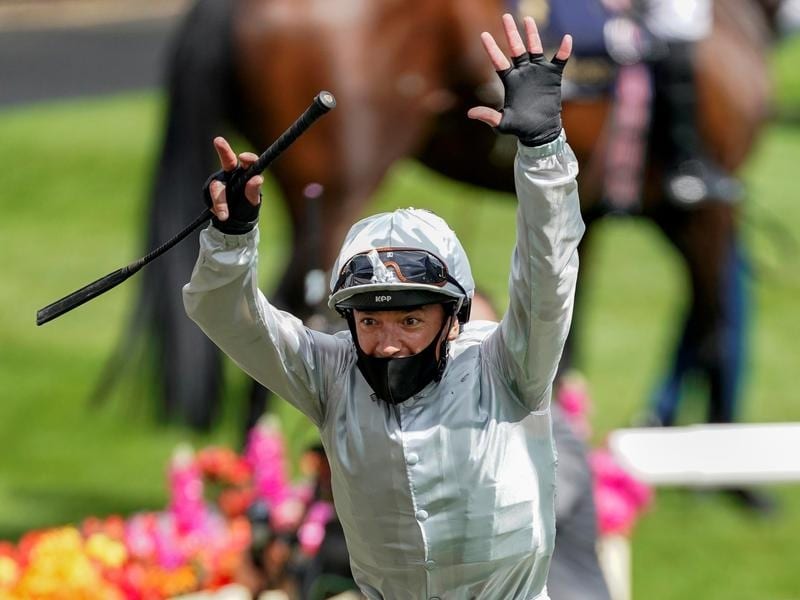 Frankie Dettori rode three winners at Royal Ascot on the final day of the meeting.

Frankie Dettori enjoyed another day to remember at Royal Ascot, as he equalled Pat Eddery’s record of 73 winners on the final day of the meeting.

In his 30th appearance, the veteran Italian claimed the only Group One that had eluded him when he rode Alpine Star to victory in the Coronation Stakes.

The 49-year-old then secured back-to-back Group One successes, guiding Palace Pier to victory in the St James’s Palace Stakes over favourite Pinatubo.

It was Wichita who set the early pace in the St James’s Palace Stakes, with Ryan Moore taking up a prime position on the rail, while Dettori was happy to settle in the pack.

He quickly dropped back as Pinatubo and Palace Pier (4-1) made their moves down the outside, with William Buick looking to have plenty of horse underneath him.

The $1.37 favourite edged in front of Wichita inside the final furlong, but Palace Pier found a little bit extra for the red-hot Dettori, pulling a length clear at the line, with Pinatubo taking second.

“We’ve always thought a lot of him, but he’s been a bit sleepy in the mornings and we were scratching our heads,” Dettori said.

“It was very hard to even get him fit and John (Gosden) thought he’d send him to Newcastle for a handicap to wake him up and it did.

“To equal Pat Eddery’s record is special. I sat next to him for 15 years, he was one of my heroes, his nickname was God so it gives me great satisfaction.”

The Group One Diamond Jubilee Stakes was won by $4 shot Hello Youmzain for Kevin Ryan with jockey Kevin Stott claiming his first Royal Ascot winner – and his inaugural Group One success.

Stott had his mount smartly away in the 1200m showpiece, opting to stick down the middle of the track.

Sands Of Mali was prominent as he ploughed a lone furrow on the far side, with Hello Youmzain heading the group in the middle before tacking over to the stands rail mid-race.

Dettori – seeking a fourth win on the day – launched his challenge on $2 favourite Sceptical and briefly took the lead in the final 100 metres.

However, Hello Youmzain dug deep to win, repelling the challenge of the fast-finishing Dream Of Dreams in the process.

Hey Jonesy completed a big sprint double in the Wokingham Handicap for Stott and Ryan, hanging on for a fine victory.

Nando Parrado at $150-left punters shell-shocked in the Coventry Stakes as he became the biggest-priced winner in Royal Ascot history.

“I was just saying it is not a shock,” said trainer Clive Cox.

“The price was a shock. He is a proper horse and we loved him from the start. It was always the plan to come here, it was just a sideways step on his first run.

“He came home and thrived from there.”

Even money favourite Who Dares Wins won the final race of the meeting, the Queen Alexandra Stakes.