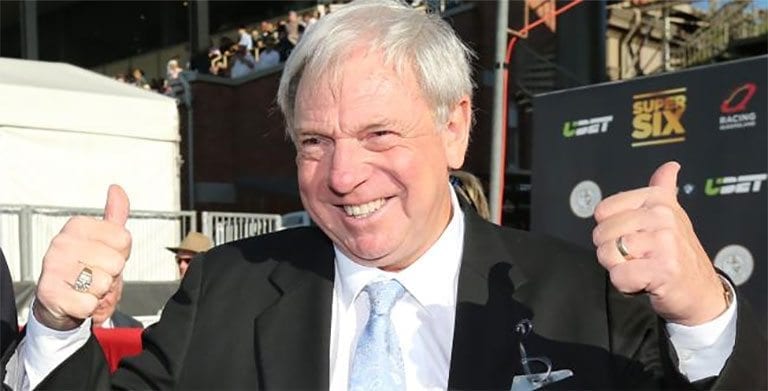 Punters rejoiced in the seventh race at Doomben on Wednesday when the heavily backed Rebel Salute won by a big space for the father-son training duo of Bryan and Daniel Guy.

The five-year-old son of Deep Field was partnered by in-form jockey James Orman, who rode the gelding very smartly over the 1200m journey despite being caught three wide.

After jumping a touch slowly from barrier five, Orman opted to settle with only two horses behind him in the three-wide line with cover and allowed his mount to cruise into the race as they straightened, going on to win by 2.5 lengths over King’s Rule and Sing For Violet.

It was a big relief for connections with their gelding getting a well-deserved win after going down in the narrowest of photo finishes at Ipswich when first-up on August 5 behind the race favourite, Nordicus.

“We actually thought he won – the photo went the opposite way, but even Jimmy came back in and said, ‘I thought I won’.”

The win on Wednesday was Rebel Salute’s fourth in 12 career starts, with all of his wins being on rain-affected going; so when the heavens opened earlier in the day and the track was downgraded to a Soft 6, the gelding was backed from $5.50 into $3.60 favouritism.

“He won on a Heavy 10 here once before and Michael Rodd won on him and he said he wasn’t real happy in it,” Guy said.

“But he was happy in it today, that’s for sure.”

Originally a $650,000 yearling purchase, co-trainer Daniel Guy now owns 100% of the horse after Orbis Bloodstock no longer wanted him.

Rebel Salute will now be targeted towards a Saturday metropolitan race meeting after impressing his trainer despite being up in grade in a Class 5.

“We had him in on Sunday, but he drew so well today, so I’m glad we came today.