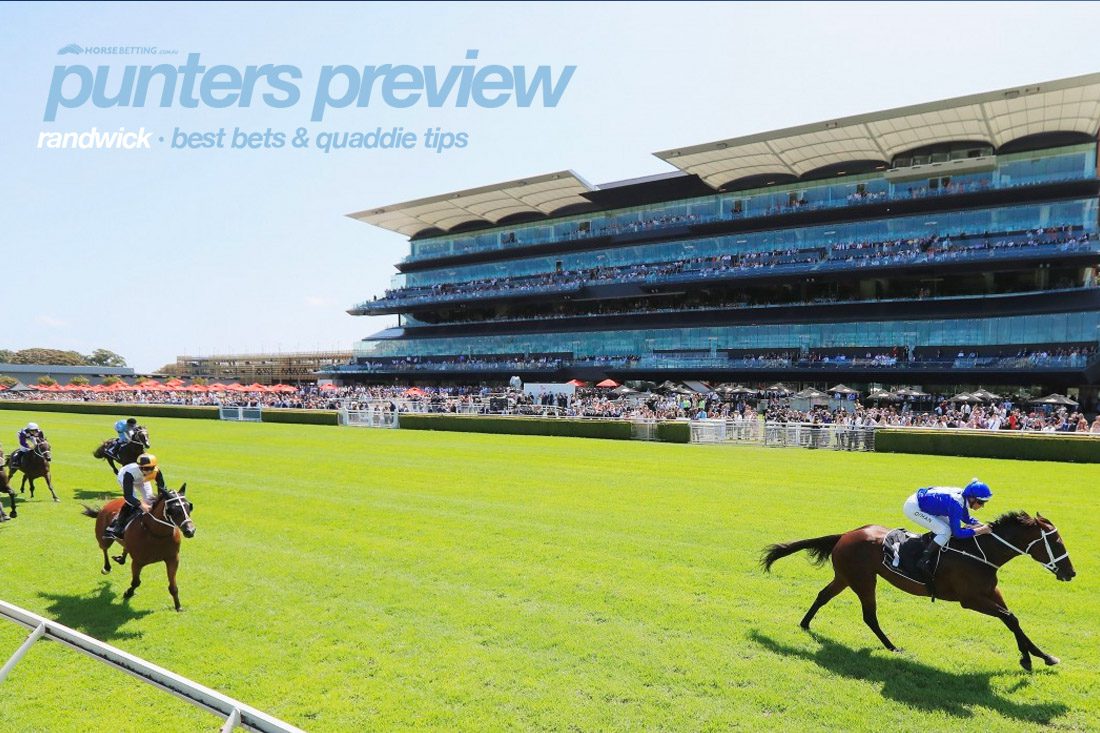 HorseBetting’s Sydney form analyst brings you his full race-by-race preview for the George Main Stakes meeting at Royal Randwick this Saturday, including his best bets and quaddie numbers for the 10-race card. The track is rated a Soft 6, while the rail is out 7m from the 1600m to the winning post and 4m for the remainder of the course. The first race is set to go at 11:40am AEST, while the feature is scheduled for 3:15pm AEST.

Stephen Jones unearthed a pretty smart galloper at Scone on September 7 in Nadaraja, whose daring 5.6-length romp earned him a spot in The Kosciuszko next month, where he is a $21 chance. The three-year-old son of Redoute’s Choice took off and put a massive gap in his rivals early in that 1100m assignment and simply kept on going, which was visually impressive. Tim Clark replaces Matthew Palmer on the two-time winner, which is a very good move, as Clark’s riding style will suit the horse greatly. Barrier three helps his case also. Expect another all-the-way win in the first.

On what is otherwise a cracking day’s racing, this field leaves a lot to be desired. Kordia did enough to beat Yiyi and Kingsheir last time at Kembla Grange, which looks good enough to win this, but his form prior doesn’t fill us with confidence. Chris Waller saddles up three in the race, with all of those looking to be winning chances – mainly Bigboyroy, who gets the services of in-form hoop James McDonald from barrier one. No confidence here whatsoever.

Talk about a lack of confidence – if you’re confident on anything here, you’re kidding yourself! While a great concept for owners and trainers in the provincial circuit of New South Wales, these Midway races have been a nightmare for punters. Tampering looks the one at $8 after winning back-to-back races in August, including an all-the-way job at this track and distance against similar company before going up to 1800m, where he just faded late. Back to 1600m will suit this son of Pendragon, who also gets a 2kg claim with Brock Ryan on his back. With some luck, Tampering can be a decent each-way play for punters in a very tough race.

It doesn’t get any easier in the fourth, where the favourite opens up as a $5.50 chance. We liked High Supremacy a fortnight ago, but he was scratched in the morning of race day to be kept for this. The Richard & Michael Freedman camp had some success last weekend with Love Tap winning well at Kembla in these same silks, so we are hoping that High Supremacy can replicate that effort first-up. Drawn out in barrier 10, the resuming four-year-old is going to get back and probably needs the run fresh, but he does look to be the superior athlete here. He is a winner fresh in the past, but again, it isn’t a race we are overly keen on.

Finally, some juice! The first Group race of the afternoon sees a quality field of 13 racing for a spot in the Epsom Handicap in a fortnight’s time. While we were very impressed with Aramayo’s most recent start when second to Zaaki, it is hard to ignore Harmony Rose here off a spell. The Mark Newnham-trained mare will look to control the speed from barrier two, while she is unbeaten first-up, unbeaten at 1400m and unbeaten on a Soft track, so all boxes are ticked. Rachel King got her first sit aboard the four-year-old grey when she ran fourth behind Entriviere and Exoboom in a 1050m trial, which will have her ready for this. With 53kg on her back on Saturday, Harmony Rose can win her way into the Epsom in a fortnight.

The three-year-old fillies have their final lead-up into the Golden Rose and Flight Stakes on Saturday in the Tea Rose Stakes, which makes for a competitive race. Following through the Furious Stakes last start, it would be hard to see anything turning the tables on Jamaea, but connections have kept her for next week’s Golden Rose. Robodira finished second that day after a dream run behind the speed, while Mallory ran third after being three wide without cover for much of the race. We were with Mallory in this year’s Golden Slipper, and we are confident that she is hitting her straps at the right time of year to win this and head into the Group 1 Flight Stakes as a massive chance. Jason Collett stays aboard, and the inside alley allows this filly to get a much better run in transit as she steps out to 1400m for the first time.

The main race of the afternoon looks to be Verry Elleegant’s for the taking. The six-year-old was brilliant first-up in unsuitable conditions in the Winx Stakes, going down by a neck to Mo’unga, who has since run second to Caulfield Cup favourite Incentivise in the Group 1 Makybe Diva Stakes. The wet track is going to aid the eight-time Group 1 winner’s chances down to the ground, as is the rise to 1600m. With James McDonald in the saddle and weight-for-age conditions in play, she looks far too good. Doncaster Handicap winner Cascadian can improve third-up.

Dubbed as ‘The Mini Everest’, The Shorts is easily the race of the day. With six confirmed Everest starters, we will see the market for the $15 million feature really take shape afterwards. While many eyes will be on Nature Strip after his dominant first-up win in the Concorde Stakes, more than a few will be watching Rothfire as the Queensland sprinter makes his long-awaited return from injury following some brilliant trackwork. While our racing analyst is a fully fledged Queenslander, Nature Strip’s first-up win had a real sense of authority about it – something we haven’t seen from the world’s fastest horse when he was first-up before. Chris Waller has this bloke ready to be an Everest champion, and we are confident that he can go unbeaten this campaign in doing so. Big watch on Rothfire, while Lost And Running trialled very well last Friday.

Montefilia returned in really nice style in the Chelmsford Stakes on September 4, running third to Think It Over and Riodini over the mile. The Group 1 winner finished third to Mo’unga in the Group 1 Rosehill Guineas in March over 2000m, then ran fourth and fifth respectively in the ATC Derby and ATC Oaks before having a spell. The David Payne-trained mare has been nominated for both Caulfield Cup and Melbourne Cup in Victoria, so connections will be hoping from a good showing here. The four-year-old did run straight past race favourite She’s Ideel in the Chelmsford, although the latter meets our top pick 3.5kg better at the weights. While that disparity is worth considering, we are happy to be with Montefilia.

If you were on Blondeau last time out, you’re probably still not over it. How he got beaten is beyond us, even with a brilliant steer from Tim Clark from the outside alley. The four-year-old gelding settled last in the 1400m race at Kembla Grange on August 14 and had to weave his way through the field in the straight with 61kg, going down by only 0.3 of a length. Chris Waller has given this son of I Am Invincible a freshen-up and a 900m trial where he was asked to do no work, rounding out the field of four before finishing strongly to suggest that the rest has done him wonders. Hugh Bowman replaces Clark, while he draws a much softer barrier (5) and drops 4.5kg to 56.5kg as he goes from Benchmark 78 to 88 company. With an unbeaten record on Heavy tracks and a sound profile on Soft going, Blondeau should be in his favoured conditions in the last. The double-figure quote is too good to refuse.