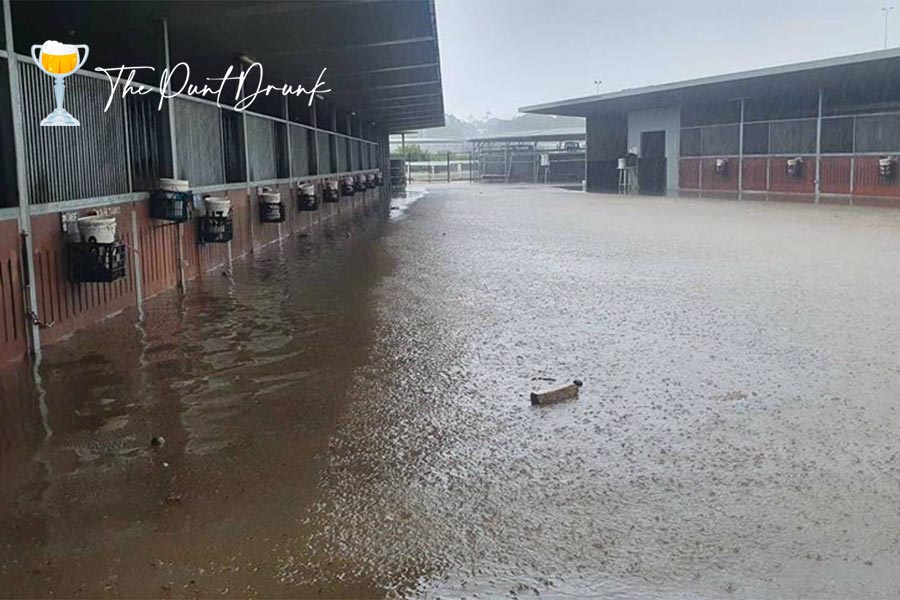 It’s the last day of summer, which means that the autumn is just one sleep away. South-East Queensland tracks continue to get hammered by rain and floodwater, a clash of the titans beckons down in Victoria, while seven years on from ‘the other Weir runner’, we get stung by ‘the other Waller runner’.

It’s never good to see natural disasters take place, especially in highly populated areas in Brisbane, but some photos that have emerged need to be seen to be believed. South-East Queensland has copped a bucketload of rain over the past five days – so much so, we lost race meetings at the Sunshine Coast, Doomben, Gold Coast and Toowoomba over the weekend. On Monday, the rain stopped, the sun came out and pictures emerged of racetracks that have gone underwater. We wish everyone affected by this weather our best in their recovery, while we are happy to report that all horses stabled in the in-field at Eagle Farm are safe and well.

Rob Heathcote’s Brisbane stables didn’t escape the flooding – big clean up for the team this AM @RadioTABAus pic.twitter.com/b80nvVuFtt

CLASH OF THE TITANS

On Monday morning, trainer Richard Litt paid a late entry fee for the Group 1 Australian Guineas, which could see star colt Profondo skip the Randwick Guineas this weekend to line up at Flemington instead. With more rain forecast for Sydney, the Spring Champion Stakes winner looks increasingly more likely to head to Melbourne, where a battle with Hitotsu is on the cards. While Profondo vs Hitotsu is mouthwatering in itself, for the breeding buffs out there it would mean Deep Field vs Maurice, which makes this potential battle even more epic. So which way will Litt go? The $27,500 late entry fee suggests he has plane tickets to Tullamarine already booked.

We can confirm that Profondo, trained by Richard Litt, has been a late entry this morning for Saturday's $1 million Group 1 Australian Guineas (1600m). Late entries close at midday, with final acceptances taken on Wednesday morning #Flemington pic.twitter.com/KVqMMRjO4X

THE OTHER WALLER RUNNER

If we’ve heard it once, we’ve heard it a thousand times: “the other Waller runner”. That was certainly the case on Saturday as Hinged pulled her star stablemates’ pants down in the Group 1 Surround Stakes. Given a gun steer by Brenton Avdulla, the $10 chance darted clear and fended off the fast-finishing burst from Startantes to take out the Randwick feature. Espiona ($2.70) and Fangirl ($3.60) charged from a mile back to run third and fifth respectively, but it wasn’t good enough for punters who were on the fillies straight out.

Chris Waller did it again in the penultimate race, where Yiyi ($5F) failed to beat a runner home in a Benchmark 88 Handicap over 2000m and Surefire ($17) stormed home to win in his stable debut. The four-year-old son of Fastnet Rock had plenty of work to do at the 400m mark, but he jumped out of the ground late to win by three-quarters of a length in his first Australian start. We will learn for next week!