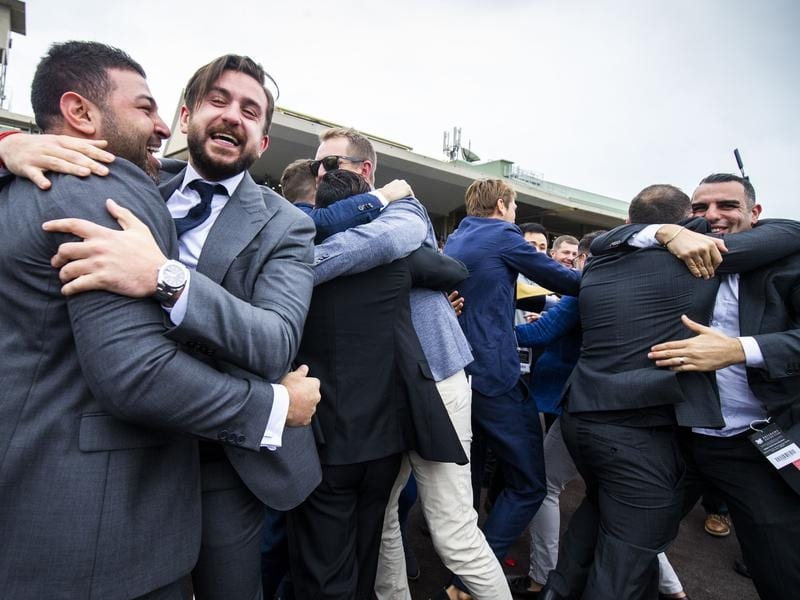 Jockey Kerrin McEvoy has won some of the world’s biggest races but rarely has he received such an ovation as did after he won his third Group One JJ Atkins Plate on Prince Fawaz.

There was mayhem in the winners enclosure as the syndicate that races Prince Fawaz celebrated wildly after the win.

Trainer Anthony Cummings missed the win, his first in the JJ Atkins since Outback Prince in 2004, after heavy fog in Sydney on Saturday morning caused long delays with flights.

“It was getting later and later so I decided to come to Randwick and watch it here instead,” Cummings said.

“It wasn’t the plan to be quite so far back but it worked out.”

McEvoy had previously won the Atkins on Benfica (2011) and The Autumn Sun (2018) but rated Prince Fawaz’s win among the most satisfying.

“I had to be patient but I started to go forward at the 700 metres and he got to the line well in the straight,” he said.

Prince Fawaz was an outsider for the Atkins before beating Reloaded at Randwick at his previous start.

“Anthony has done a great job with him and he should be a force in the spring,” McEvoy said.

Cummings hopes to run Prince Fawaz in the big three-year-old races in the spring, including the Caulfied Guineas.

Prince Fawaz cost $220,000 at the Magic Millions Sales as a yearling and is raced by a large group of friends who only purchased the horse after originally planning to buy another horse.

McEvoy returned to a huge ovation from connections as the colt is named after a close friend of the group, Mark Fawaz Alchi, who died recently.

John Allen who rode runner-up Kubrick said his horse probably could have won with more racing under his belt.

“Greenness probably cost him and I think he is a nice horse for the spring,” Allen said.

“He lacks a bit of experience and strength at the moment but he will be a different horse in six months,” he said.

Eric The Eel did the best of the Queensland horses coming from last to be fifth.

“He might make a nice stayer,” jockey Glen Boss said.

Blake Shinn who rode the $3.50 favourite Accession said the colt had struggled to run a strong 1600m at this stage of his career.