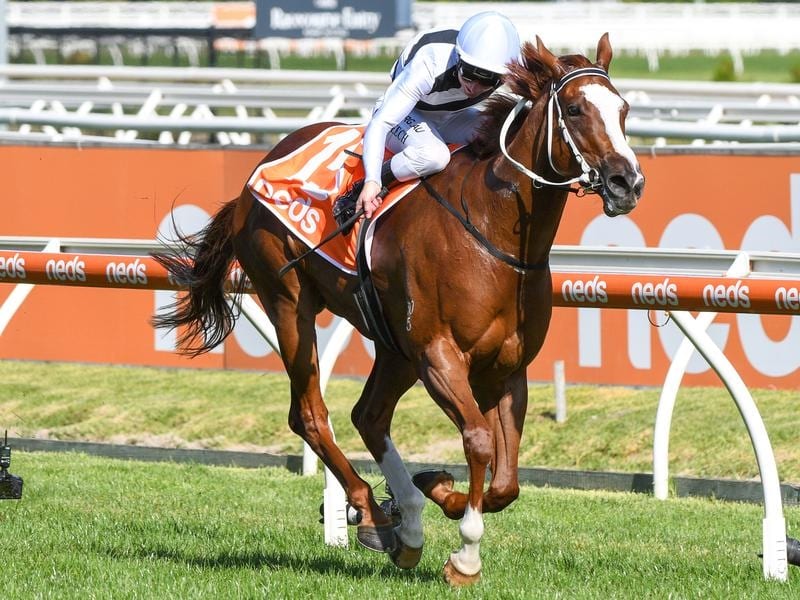 Lightweight Pippie has given her rivals a sprinting lesson to win the Oakleigh Plate at Caulfield.

Four-year-old mare Pippie has given the track record a shake with a performance of pure speed to win the Group One Oakleigh Plate at Caulfield.

Ridden by Linda Meech for the John and Chris Meagher training partnership, the lightly weighted Pippie ($12) began brilliantly from a wide draw to lead Saturday’s 1100m handicap and was never headed.

Pippie was full of running around the home turn and opened a winning break half way up the home straight to beat the fast-finishing Zoutori ($21) by a half length.

Her first Group One victory added to her unblemished fresh record from three attempts.

“I said last time in she went out a little girl and she’s come back a grown up woman,” Chris Meagher said.

“Today she was just pure speed and was too good.

“I said to Linda, ‘handlebars down as soon as the gates open’.

The win was a first Group One for Chris Meagher in his partnership with his father John who is a Melbourne Cup-winning trainer and member of the Australian Racing Hall Of Fame.

“It’s the first Group One for the partnership and my first Group One. To do it here with her and these owners who have been unbelievably loyal is just a dream.”

With Pippie’s 52kg in the Oakleigh Plate below her regular jockey Ben Melham’s range, connections opted for Meech.

“We sat down with the owners and just said who do we get that can ride 52 kilos and is a great front-running rider?” Meagher said.

“Obviously Linda’s an exceptional front-running rider and it worked out perfectly.”

Meech claimed her second Group One after the 2015 Coolmore Classic on Plucky Belle and became the first female jockey to win the Oakleigh Plate.

Meech said she had spent the past month ensuring she could get down to the weight to ride the mare and said the win meant a lot.

“It’s awesome, especially to do it at Caulfield,” Meech said.