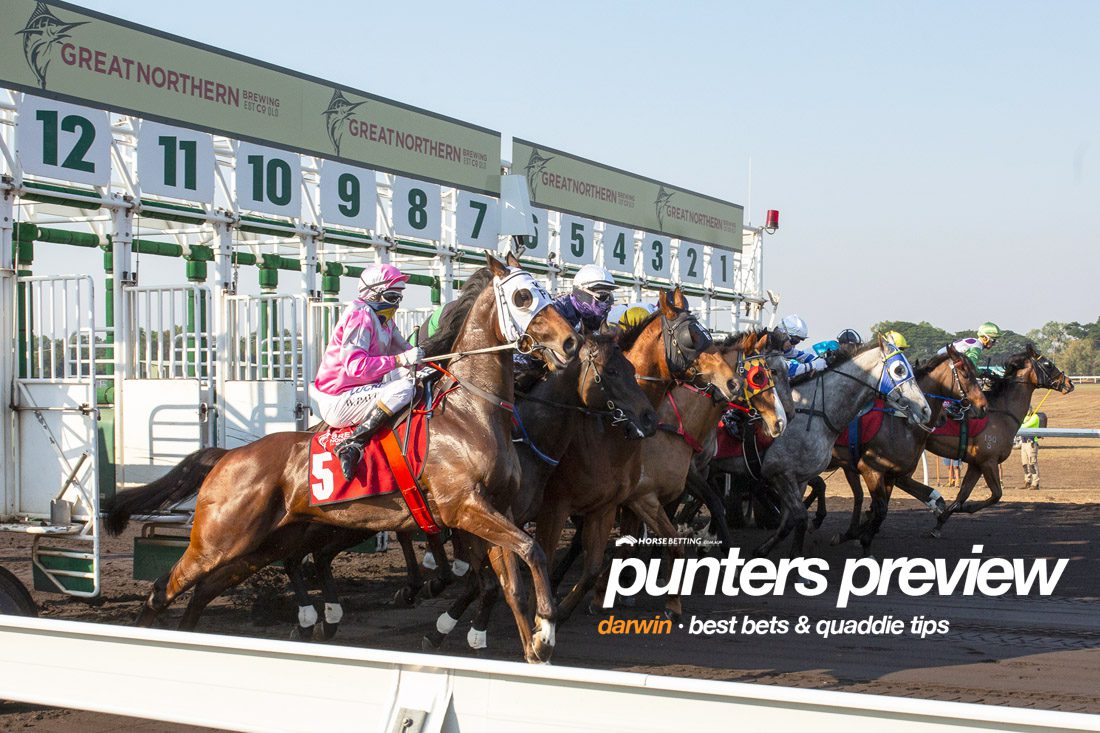 The 2022 Darwin Cup Carnival continues this Saturday with seven races for Palmerston Sprint Day. This is HorseBetting’s race-by-race preview with best bets for every event on the card.

Miroku has yet to win a race at Fannie Bay, but in five starts he has finished either second or third. A third over 1400m (0-60) at Morphettville Parks in March last year was followed by three starts from 1200-1600m (0-66) in Darwin where the five-year-old gelding finished among the minor placegetters. Miroku returned to SA late last year and proved competitive in three starts before a third at Morphettville over 1250m (0-60) in late April. Since arriving back in the Top End in late June he has managed a second over 1200m (0-66) and a third over 1300m (0-66), and with two 1500m victories in the past it could finally be the time where he gets that NT win. Star Of Monsoon has shone in four Darwin starts, but the last time he contested a 1600m race was in July 2017 when he finished second in a Wyong maiden. Starlite Valley finished third in the Darwin Guineas (1600m) on July 2, while Feed The Monster and Siakam are backing up from Wednesday where they came third and fourth, respectively, in the same race over 1600m (0-62).

Zou Der Zee has had 69 starts for just six wins, and although he has spent most of his career racing in Queensland he seems to enjoy the Fannie Bay dirt. The nine-year-old grey gelding debuted in the Top End last year, where he had six starts from July-November for a win over 1200m (0-58) on Darwin Cup Day (August 2) and a third over 1300m (0-58) in September. He returned from a six-month spell in May and disappointed at Kilcoy and Toowoomba. In his first start back in the NT, Zou Der Zee finished fifth over 1200m (0-58) behind Hard Ransom on June 25 before rattling home after missing the start to finish second behind Smartkap over 1300m (0-62) on July 13. The cards might just fall his way on this occasion. Dream Weaver is racing well and was a last-start fourth in the Rose Bowl (1300m) for the fillies and mares at 0-70 level. In two Top End starts, Hard Ransom won on debut before a last-start fifth over 1100m (0-58). Malibu Edition, Magnus A Go Go, Mr Boomjangles and Latest Bentley are the next best.

Smartkap has hardly put a foot wrong since arriving in the Top End in May. The five-year-old mare has had six starts for a last-start win over 1300m (0-62) on July 13, as well as three thirds and a fourth from 1000-1200m at a 0-62, 0-64 and 0-70 level. It perhaps comes as no surprise that she has been in the mix in five of those races as her form in NSW and South Australia was more than acceptable. Smartkap might have a smart trainer and an in-form jockey in her corner, but she will have to be on her game as Mr Cashman – with champion Top End trainer Gary Clarke and jockey Jarrod Todd guiding his fortunes – will be up for the fight. Although he will spot Smartkap 3.5kg, Mr Cashman has made an impression since landing in the north from Queensland late last year with a win, two seconds and three thirds in nine starts. He was a last-start third behind Mighty Murt over 1200m (0-76) on July 9. A scratching has reduced the race to just four starters, so in all honesty Little Town Blues and New Roman will be battling it out for third place.

Umfana is backing up after finishing second to stablemate Fraction Late by half a length in an 1100m maiden last Saturday. The four-year-old gelding is capable of finally securing that elusive win at his 11th career start if he can put it together for the second week in a row. Umfana came close to breaking his duck when he finished second at Strathalbyn and third at Bordertown over 1100m before farewelling SA for the NT. A fourth over 1100m on June 11 and a seventh over 1200m wasn’t the most auspicious start to his Top End sojourn, but his last effort would have surely pleased trainer David Bates – the former champion NT jockey. Air Command made his Darwin debut in that very same maiden last weekend and finished fourth, and although he will improve on the effort he still spots Umfana 2.5kg. Mystery Flyer makes her NT debut and showed promise in her first four starts in SA and Victoria before a last-start flop at Albury. Zilx was a last-start fourth and can surprise, while Leanna Belle was fifth behind Fraction Late last week.

Illustrating Law will have his first start at Fannie Bay and if his NSW form is anything to go by he should have too much class for his rivals. The three-year-old gelding is likely to start as favourite, and if he handles the dirt, he should make it three wins from nine career starts. He also boasts two seconds and a third after eight appearances at Warwick Farm, Newcastle, Hawkesbury, Gosford and Goulburn. In his last two starts over 1000m (Class 1), Illustrating Law finished second at Hawkesbury before saluting at Gosford. Settling on a quinella, exacta and first four is no easy task as very little splits the other eight runners. Mt Buller arrives from Victoria and was victorious five starts ago on April 2 over 1200m (0-58) at Ararat. Starlite Rebel won at her one and only start in Alice Springs in April before proving competitive against decent three-year-old opposition in her last two Darwin starts. Zip Lane had a win and two seconds in five appearances at the start of the year before going to the paddock in late April. Cassatt and Pop Magic could sneak a place.

Manly Cove looked set to end his winning drought in Darwin, which extends back to January 2021, before finishing second behind Kent Street over 1000m (0-66) last weekend. The six-year-old gelding once again gets the chance to make it five wins in 20 career starts and four wins in 10 Darwin starts when he takes on four other rivals on Saturday, and although there are no certainties in life, it would be highly surprising if he didn’t salute on this occasion. Manly Cove, who started life in the NT in late 2020 with three straight wins, receives a 2kg impost this weekend and the only threat appears to be Expert Witness. After winning an 1100m maiden on his Darwin debut on New Year’s Day, Expert Witness finished second on Australia Day (1100m) against three-year-olds and maidens before a third over 1000m (0-64) on February 18. He has had two runs in July following a spell winning over 1000m (0-58) before finishing third behind Kent Street and Manly Cove last weekend. It’s hard to see No Nay Emerald, Euphegenia or Brazen Boy winning.

Easy Beast is a very narrow selection in the NT’s premier sprinting race of the year as there are a host of chances in arguably the best Palmerston Sprint field in recent times. The seven-year-old gelding has had 53 career starts for just seven wins, and despite forging a respectable career in country Victoria, he has also made an impression in Melbourne, Adelaide and on the Gold Coast. Had his one and only Darwin start on July 2 when he stormed home in the final stages to finish second behind the in-form Syncline in open company over 1100m. Syncline has been absolutely fantastic since debuting at Fannie Bay in June last year – 14 starts for five wins, seven seconds, a third and a fourth. Smuggling and Eastwood, who has been placed in his past five starts, finished third and fourth in the Palmerston last year after finishing first and second in the Pioneer Sprint (1200m) in Alice Springs in May. It was back-to-back Pioneer Sprint wins for Smuggling. The Captain, Devil’s Temptation, Ideas Man and Our Luca – third in the 2022 Pioneer Sprint – are last-start winners at a high level in Darwin and are more than capable of taking out the race. Royal Tyke and Masterati are lightweight hopes, while Mighty Murt and Military Zone can leave their mark.