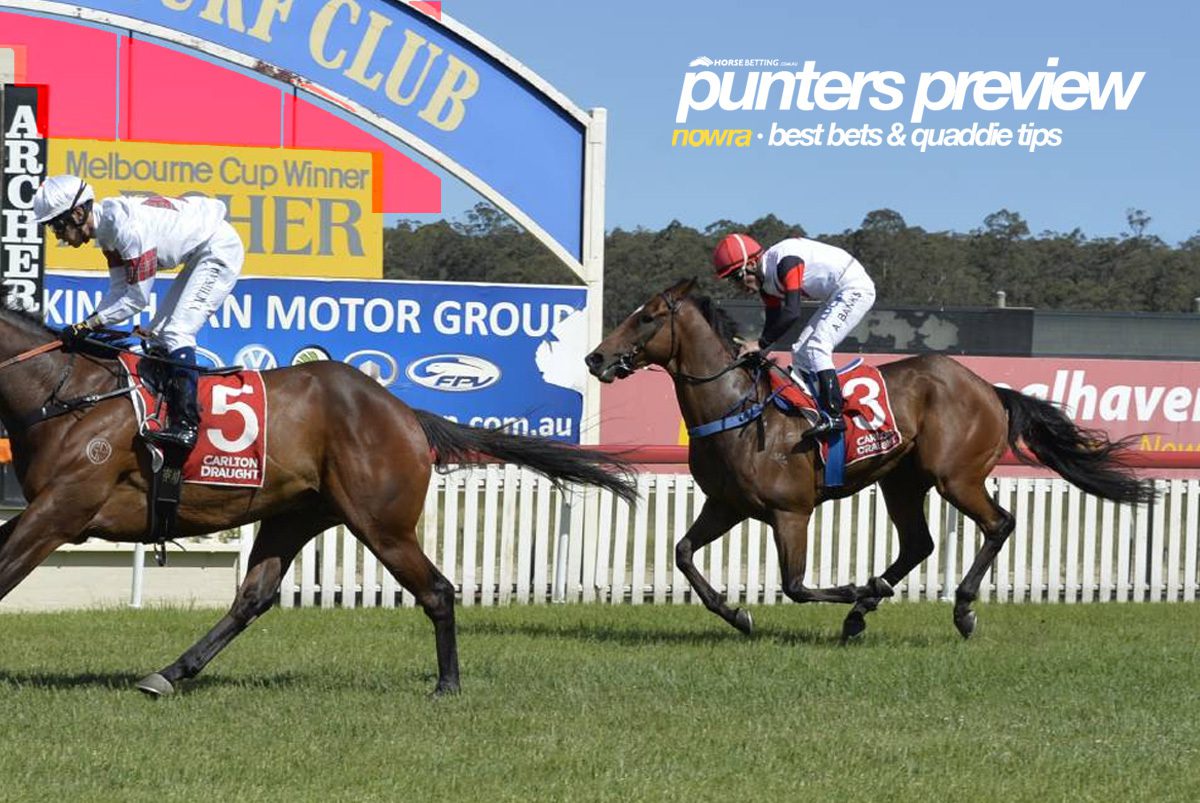 Nowra will host the second heat of the Country Championships series on Sunday afternoon, where the first two horses past the post will book their ticket to the final at Randwick on Day 1 of The Championships. HorseBetting’s New South Wales form analyst brings you his best bets and quaddie numbers for the day, as well as his top pick in the Country Championships Qualifier. The track is rated a Soft 6, the rail is set true, and the first race is set to jump at 12:55pm AEDT.

There’s no prizes for finding the favourite, but this is quite an open race, so there are still some good each-way odds on offer. Jean Dubois saddles up his talented three-year-old Arnaqueur, who returns as a gelding after a somewhat disappointing spring. The son of Astern boasts an impeccable first-up record of two starts for two wins and comes into this race fresh off just the one trial. The Goulburn-based galloper won stylishly on debut over 1300m as a two-year-old, before resuming on August 1 over 1400m in a Class 1 where he came from last to win in the final bound. During the spring he contested some quality three-year-old races, running fourth on two occasions. On August 28 he ran behind Coastwatch in the Group 3 Ming Dynasty Stakes, before running an unlucky fourth behind Giannis and Tiger Of Malay, which is very good form. He does go up a couple of grades to Class 5 company, but that Group and Listed form suggests he is good enough, despite having only won the two races. Tommy Berry will do the riding on Sunday, which is a big plus, while barrier nine should see Arnaqueur settle midfield and look to finish off strongly over the top.

Richard & Michael Freedman saddle up Allusionist on Sunday in what will be the gelding’s ninth career start. The three-year-old is yet to win a race, but he has placed on four occasions, running behind the likes of Honeycreeper, Glittery and Release The Beans. Two starts ago, this son of Super One contested the Magic Millions Maiden on the Gold Coast, where he finished 10th of 14, just 2.8 lengths away from Warmth and Devil’s Throat. He failed to make an impact in his most recent start at Canterbury on January 28 over 1250m, so he should appreciate getting to country grade for this first time in his career. All of this galloper’s trials have been good, so he clearly has some ability; he just needs to put it all together on race day. He has drawn to get a favourable run from barrier two, while apprentice jockey Qin Yong will take 1.5kg off the three-year-old’s back, meaning he will carry 60.5kg, which brings him right into this race. He’s good enough for this field.

In the opening race of the day, Keith Dryden and Alysha Collett combine with the consistent Fangela. The four-year-old grey has raced five times for two wins and two placings, and he comes off a 1.45-length second at Randwick on January 22 in a Class 2 Highway over 1100m. The son of The Factor was first-up for over six months on that occasion without a public barrier trial, so he would have no doubt needed the run, which told late as he just peaked. Now second-up with race fitness under his belt, we expect this gelding to be very hard to beat as he drops back to 1000m and finds himself in a Benchmark 66 with 59kg on his back. From barrier two, Collett will have the galloper in behind the speed before setting out after the leaders in the home straight. He certainly looks the testing material.

The final race is a deadest lottery according to the market, with joint $8 favourites, another two gallopers who are $9 chances and then four horses all on $12. Although Call Me Artie is one of the favourites at $8, we believe that that is great value for a horse who is racing in good form. The four-year-old son of Artie Schiller hasn’t won for 11 months, but he has been in the placings on three occasions in that time, including a narrow second to Room Number. That horse has since won a Benchmark 78 at Randwick and took out the Bega Cup, so the form looks good enough for this Benchmark 58. Call Me Artie has raced once since then, finishing sixth as favourite at Canberra over 1600m. Trainer Neil Osbourne has opted to keep his gelding at the mile while dropping back in grade, which he should appreciate. There should be plenty of speed in this big field, so we are hoping to see jockey Billy Owen settle around the middle and allow his mount to let down late. He finished second at his only start at this track, and we think he has a great chance to go one better on Sunday.