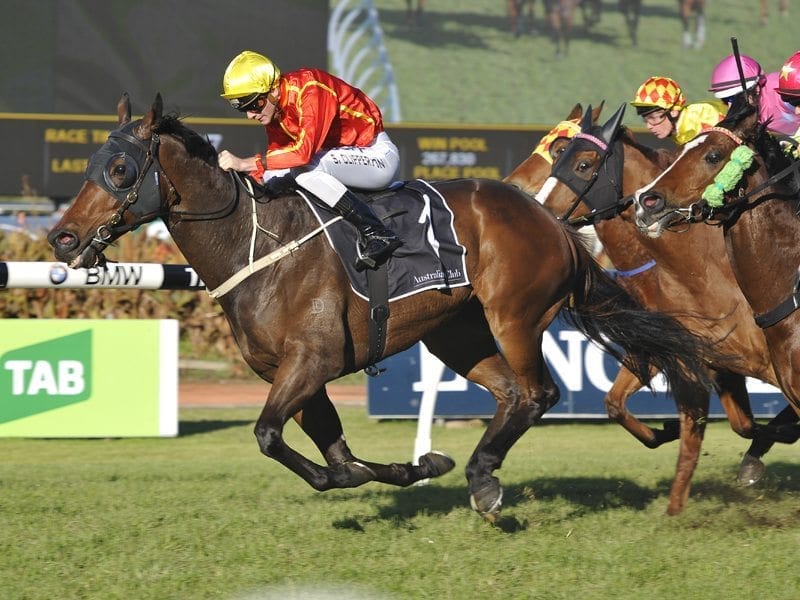 Few people can say they have ridden a horse to Group Two success and later trained it to win stakes races.

Peter Robl can boast such a feat with Ninth Legion, but he is even prouder of the six-year-old who has added Saturday’s Civic Stakes (1350m) at Rosehill to his recent Eye Liner Stakes win in Queensland.

Injury ended Robl’s riding career but he has made a great start to training with horses he has mostly inherited.

“I won the Villiers on him and I’m pretty sure he recognised me when he came to the stable,” Robl said.

“I couldn’t be prouder of him.

In an open betting race, Ninth Legion was an $11 chance but Sam Clipperton was positive on the gelding and didn’t let the equal favourite Oxford Poet ($4.20) get away from him.

At the business end of the race, Ninth Legion went up a gear to hold off the challenge from Better Not Blue ($8.50) by a long head with Vergara ($6.50) another length third.

Robl has a different perspective on racing as a trainer and is a little tougher on riders than he used to be, but only had praise for Clipperton.

“I was always positive on the horse and Sam rode him as good as I could,” he said.

Ninth Legion began his life with Anthony Cummings and won the 2013 Group Two Villiers Stakes when trained by Hawkes Racing and ridden by Robl who now trains for the Segenhoe group.

“He came to me in wonderful order from the Hawkes stable,” Robl said.

“He is enjoying a change of environment and I think we just like each other.”

Ninth Legion will now be aimed at a similar race in two weeks, the Listed Winter Stakes (1400m) which is also a possibility for the runner-up.

Better Not Blue’s trainer Michelle Ritchie was overwhelmed by her horse’s performance in his first stakes race.

“It brought tears to my eyes,” she said.

“I know he didn’t win but he tried as he always does and ran a great race.”