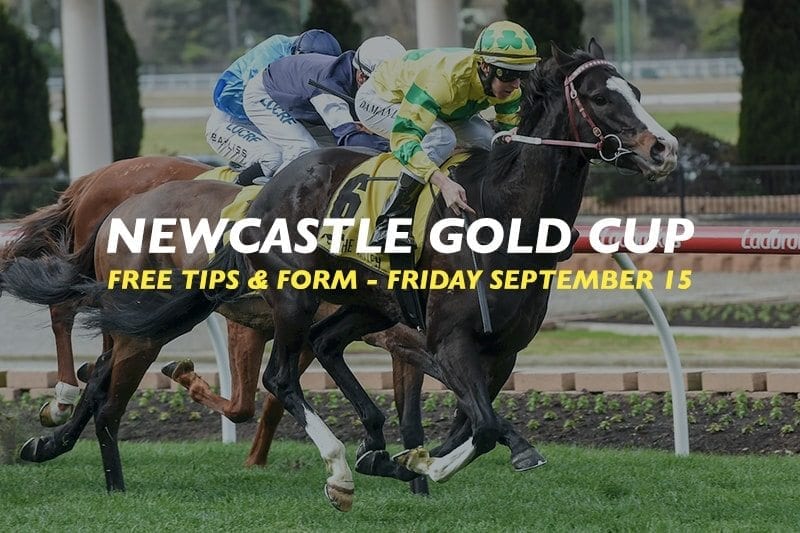 THE Newcastle Cup is one of the more popular provincial cup races in the lead-up to the Melbourne Cup and this years sees nine runners run for the prize.

Pacodali will sure to have its supporters having won four from its last five starts, but there’s some class with Destiny’s Kiss, Auvray and Sayed which all bring in good winter form.

We have free tips and form for all races at Newcastle on Friday, which also includes the Cameron Handicap and the Spring Stakes.

Static Lift has won only two from 15 starts, but the Cummings-trained gelding has potential. The five-year-old ran second at Newcastle last start which was an encouraging performance and its form prior included a fifth behind the city-performed Mana. The small field of six runners should help it settle closer to the pace and having Hugh Bowman in the saddle from barrier one is a bonus.

Scott Singleton lines up Concessions, which has the ability to win at this level. The four-year-old mare by Tickets wasn’t far behind the winner at Wyong last start and it was considered good enough to run in the Kembla Grange Classic last season. That’s a good sign and a win at this level won’t be far away for Concessions.

Der Meister was too tough for them at Muswellbrook last start and despite rising in grade, it has always had quality. The Paul Perry-trained local showed plenty of promise when coming to Australia, but it never lived up to expectations. This isn’t the hardest field it’s ever had to run against so we’re expecting another top effort from the German-bred.

Perpetual Motion rises up in grade again having won its last two starts at lower levels. The Garry Frazer scored by over seven lengths at Bathurst two starts back before winning again at Hawkesbury when dropping back in distance. This might be a step too far, but it has shown enough to warrant a shot and it could be paying handy each way odds.

Dexluther ran a credible placing on debut behind Catmosphere at Wyong and it could improve from that outing. The Bjorn Baker-trained son of Written Tycoon had the betting support on that occasion which is a positive and it ran a quick enough time to be considered in a strong maiden event here.

Renewal is on debut for Team Hawkes after two trial placings. The Dream Ahead three-year-old has been patiently handled for this and it should get every chance from inside draw. Getting Brenton Avdulla in the saddle is a big sign for punters and the betting picture will suggest its winning chances.

Pulang Pula is on debut for Mark Newnham having had four trials for two placings and one win. That win came last time out at Randwick when beating a field of 10 and the form out of that trial should stack up nicely. It won’t have it easy from out wide in barrier 12, but it looks a nice early season three-year-old heading in a good direction.

Riva Romance has had the benefit of race day experience which should count for something in this. The Baker-trained mare by Encosta de Lago ran second on debut before finishing fifth behind subsequent winner Screamarr at Kembla Grange. This distance looks ideal for its resumption and the market should tell the full story.

Astoria produced a solid finish for third in the Ming Dynasty and that form should be good for this. The James Cummings-trained colt scored a 3.5-length win on debut over subsequent winner Catmosphere and the track was too heavy for it in the Sires’ Produce Stakes. This level of racing is well below that and it looks like a nice type in the making.

Whispered Secret needed the run last start when finishing last at Randwick, but its form prior included some standout performances. The Kris Lees-trained local won back-to-back races which culminated in a Fernhill Stakes win at Randwick. It then ran third behind The Mission in the Group 1 Champagne Stakes and stepping back up to the mile is going to be ideal for this.

Spectroscope resumed in the Show County Stakes at Randwick last start and didn’t finish off as impressively as many were predicting. The Cummings-trained import showed glimpses of top quality form last season when winning the Doncaster Prelude and running sixth in the Hawkesbury Cup. It has won two from three second-up and it’s sure to be well-backed for this run.

Special Missile just keeps winning and it must be respected. The John Thompson-trained four-year-old has rattled off five consecutive wins which started with a maiden win in June and ended with a win at Rosehill last start. That’s some rise in a short time and this is another rise up in grade, but it’s winning easily and it gets in well on the weights at 54kg and the inside draw helps.

Sayed cost punters plenty at its last two starts when being beaten as the $1.65 and $1.35 favourite. The Chris Waller-trained stayer looked the goods after winning consecutive races, including one at Randwick by over five lengths, but it has been disappointing its last couple to say the least. Punters will get a better price here which could be worth looking at.

Pacodali is a Darren Weir runner from Victoria which has the form on the board. The five-year-old has won four of its last five starts which included a win over 2016 Melbourne Cup winner Almandin last start at Moonee Valley. The son of Paco Boy is one of the most improved stayers this year and the dry track conditions at Newcastle look ideal for this.

Lubiton has impressed in two starts this preparation which included wins at Canterbury and last start at Wyong in the Mona Lisa Stakes. The Baker-trained four-year-old mare had strong form prior to those wins which featured a placing in the Kembla Grange Classic and a fifth in the Vinery Stud Stakes. It didn’t see out the distance in the Oaks, but this suits perfectly and it won’t need much luck from the barrier.

Invincible Gem ran a credible third in the Tramway Stakes behind Happy Clapper last start and that’s group-grade racing. The Lees-trained four-year-old looked the goods when winning the Missile Stakes last preparation over horses including Le Romain. That form is great for this and having its fresh up run under its belt will do it plenty of good. Big watch on this runner.