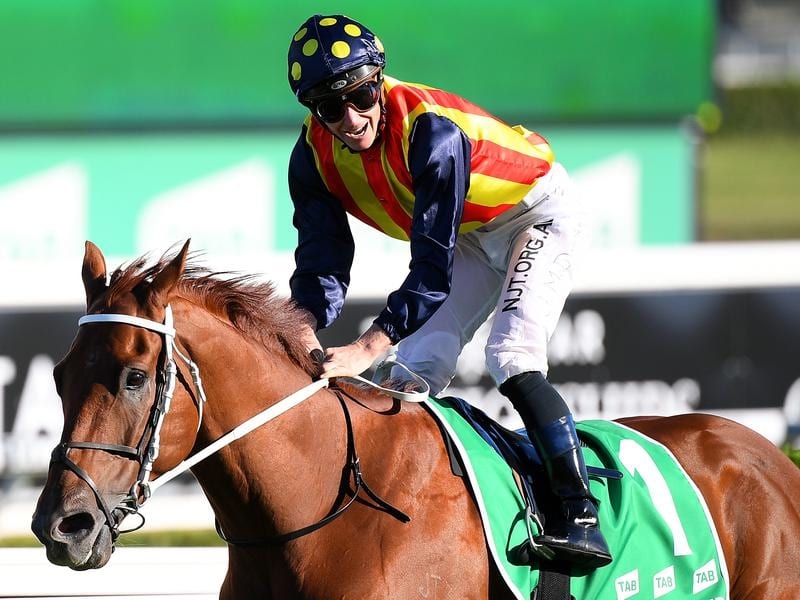 James McDonald admits his feelings about Nature Strip can oscillate between extremes but jubilation reigned after the sprinter’s TJ Smith Stakes demolition.

Against a top-class field boasting nine individual Group One winners, $4.20 favourite Nature Strip did what he does best: rolling along in front and breaking the hearts of his rivals.

He coasted to victory by two lengths over Santa Ana Lane ($9), who was chasing successive wins in Saturday’s 1200m Randwick feature, with Redzel ($15) another head away.

The authority of the win had trainer Chris Waller encouraging Everest suitors while McDonald pondered the enigma that is Nature Strip.

He has ridden the sprinter in eight of his past nine starts for five wins and three costly defeats as favourite, and he understands the pain of punters who never know which version of the horse will lob.

“It is a love-hate relationship,” McDonald said.

“I think he just likes a bit of racing. Once he gets deeper into his prep he loves stable life with the Waller camp and he’s just doing a marvellous job.”

From an inside draw, Nature Strip mustered speed to lead and McDonald admitted he was surprised nothing tried to take him on.

However, he also believes the horse is finally learning to harness his ability.

“As everyone knows, the first furlong is key to either winning or not,” McDonald said.

“He is getting to the stage now where even if he is getting pressured, he is coming back that length until I signal for him to go.

“He is just getting better and better, and he is a gem to be a part of.

“From about the 800 metres I felt like he was airborne from there and he was high steaming from the top of the straight.”

Waller is in awe of Nature Strip’s pure speed and says it is that asset that separates him from other horses.

Nature Strip gave the champion trainer his first TJ Smith victory and while tempted to consider the All Aged Stakes (1400m) in two weeks, Waller said it was unlikely.

“We’d be very tempted but do we need to? I’d say there’d be plenty of people chasing him in the Everest and that’s a big race,” Waller said.

“So wow, what a great horse and we’ve got a lot to look forward to.”

Santa Ana Lane made good ground to grab second, just ahead of the evergreen Redzel, who stuck to his task bravely, while Pierata also made a sustained run to finish fourth.