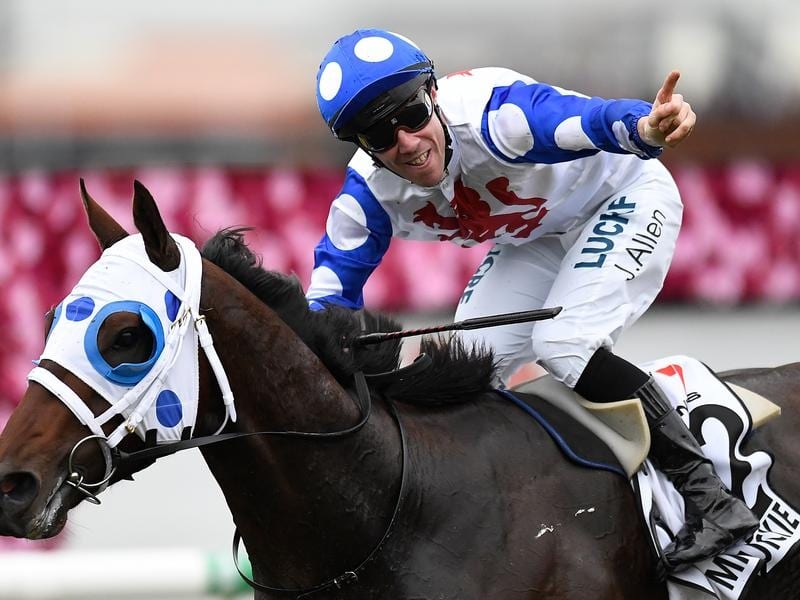 Mr Quickie survived a protest to give trainer Phillip Stokes his first Brisbane winner in an action-packed Group One Queensland Derby.

Celebrations were cut short when jockey Damien Oliver who rode runner-up Vow And Declare lodged a protest against Mr Quickie for interference over the final 300 metres of the race.

Oliver told stewards he was forced to ease off the heels of Mr Quickie, ridden by John Allen, which he felt impeded his momentum in the run to the line costing him more than the three-quarters of a length margin between the two horses.

“I lost significant ground at that point and if that interference hadn’t occured I felt my horse would’ve won the race,” Oliver said.

“I’ve been able to pull a lot of ground off him in the run to the line.”

“I’ve held a length-and-a-half margin on him the whole way up the straight and to say it cost him the race is very ambitious,” Allen said.

“He isn’t making any ground on me until the last 10 metres when I’ve started to ease my mount down when I had the race safely in my keeping.

“It’s very ambitious to say the interference cost him the race.”

After only a short deliberation, stewards dismissed Oliver’s protest.

“There was a shift in the straight but your horse probably made up a quarter of a length in the final stages,” chief steward Peter Chadwick told Oliver.

“Because of the margin between the two horses there is no basis to reverse the decision.”

Mr Quickie, backed into $2.80 favouritism, gave Stokes his first Brisbane winner with only his third runner.

“I brought Hucklebuck up here for the carnival a few years ago to run in the Fred Best and then the Stradbroke but this is my first winner and I’m thrilled for all the owners involved,” he said.

“I think the sky’s the limit for this horse. He’s come a long way in a short space of time and who knows what he can measure up to next prep.

“I’ll leave him up here for a month and then aim him at the spring in Melbourne. Who knows, a race like the Caulfield Cup could be within his scope.”

Trainer Danny O’Brien was pleased with the effort of Vow And Declare ($26) while Brenton Avdulla said third placegetter Aliferous ($13) produced an outstanding effort to finish third.

“She copped the backwash of the interference from the fall and did a huge job to pick herself up and finish off so strongly,” he said.

The Derby was marred by a fall in the straight when Lord Arthur was severely checked before crashing to the turf.

Corey Brown was taken to hospital for tests and chief steward Peter Chadwick said the jockey was conscious.