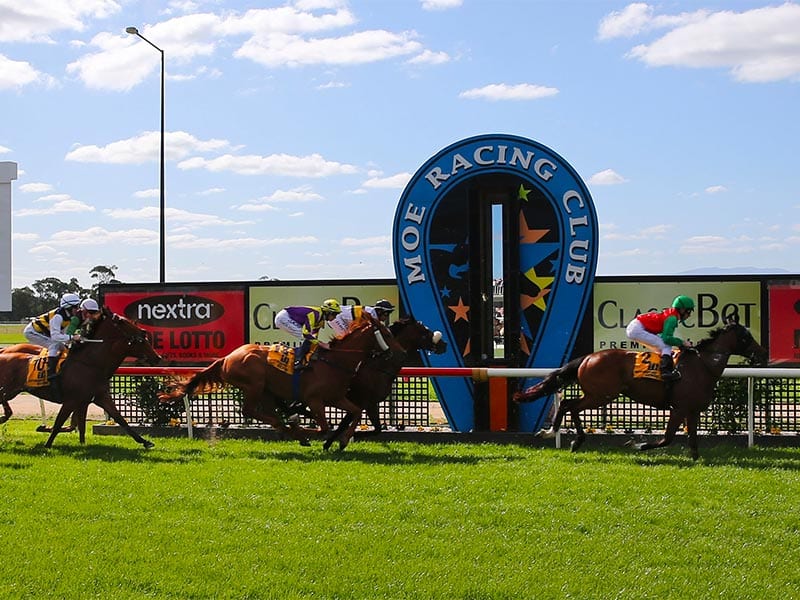 Moe Racing Club is set to host a nine-race card on Tuesday afternoon from 12:30pm AEST. The track is rated a Heavy 8 and the rail is out 3m for the entire circuit, so it may pay to keep an eye on the first couple of events to see how the course is playing. HorseBetting.com.au brings you the best bets, top odds and free quaddie numbers for the Moe meeting.

Best Bet: Across The Way

In the opening leg of the Moe quaddie, last start track-and-distance winner Across The Way looks hard to go past yet again. The Charlotte Littlefield-trained mare over-raced throughout the early stages of her first-up run yet still had plenty left in the locker over the concluding stages of the 1100m. Both of her two career wins have come on rain-affected ground and she tends to race up on speed, which looks to be the recipe for success on Tuesday afternoon. Carleen Hefel has been on board for both her wins, and the apprentice jockey’s 1.5kg claim should allow Across The Way to get to the front from barrier two and prove hard to beat yet again over the Moe 1100m.

The Russell Cluning-trained Candy Puzzle looked to have the race shot to pieces at Bairnsdale on May 2, but he simply could not put his rivals away over the final 100m. He loomed up in the home straight to eyeball the leader but was worried out of the win in the shadows of the winning post. While a 10-start maiden rarely gives punters confidence, that record includes five minor placings. From barrier five, Patrick Moloney will look to settle the Toorak Toff gelding in a positive position, and if he runs up to the form he has shown this campaign, he should break his maiden on Tuesday.

The Jason Warren-trained Brooklyn Heat steps back from a tough Saturday metro event to a midweek BM64 and will take some holding out on Tuesday afternoon. The half-sister to the smart Brooklyn Hustle tends to do her best racing up on speed and has competed in harder races than what she faces here. With form behind Annavisto and Miss Inbetween, you would think the filly just needs to handle the going to be a winning chance. The 3kg claim of Josh Richards pushes the weight down to just 54kg, which should bring Brooklyn Heat right into this.