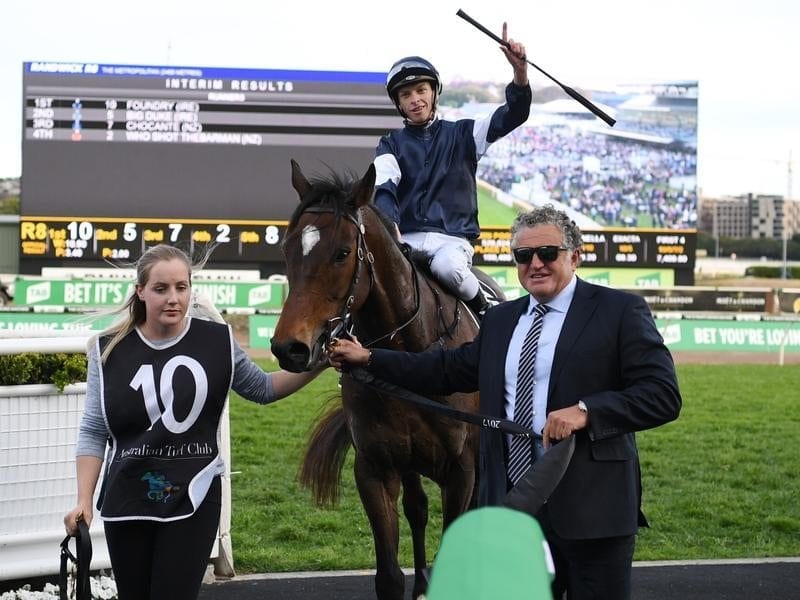 Irish gelding Foundry and New Zealand jockey Michael Dee have shared a Group One-breakthrough at Randwick as the Victoria-based duo teamed up to claim the Metropolitan.

Trainer Richard Hickmott was not in Sydney to witness the stayer’s first win since his Australian debut in 2014, leaving Dee to justifiably take centre stage after his career highlight.

“To get a Group One for (owner) Lloyd Williams and the team down at Mt Macedon, everyone, thank you very much for having me on,” Dee said after Foundry scored the 2400m staying test by half a length.

Dee, who relocated from New Zealand three years ago, was always confident Foundry could supply his first ever win at Randwick.

“The field wasn’t overly flash. I knew he was a very good chance coming into the race because he’s just a genuine good stayer,” Dee said.

“Hopefully he goes on to the Caulfield Cup and the Melbourne Cup.”

Originally trained by Aiden O’Brien, Foundry raced three times in Ireland the England before transferring to Hickmott, where until Saturday his best result was a second in the Group Two Blamey Stakes at Flemington in 2014.

Dee finished third in last year’s Metropolitan on Godolphin gelding Allergic and in March finished a length off Gingernuts to come second on Rising Red in the New Zealand Derby .

The 21-year-old said the race panned out perfectly for the $10 chance.

“I didn’t have to use us too much gas early. Chocante pushed me out three wide around the bend but luckily I was able to come back easily and slot into the one-one.

“From then on he travelled beautifully.

“The team side once you get to the 800 just make it a true staying test so I let him stride there from the 800. To the horse’s credit he toughed it out in the end.”