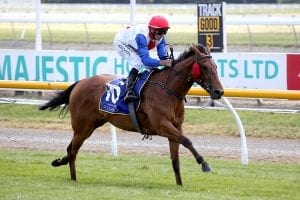 Smart southern filly Savvy Coup will appreciate a step up in trip when she chases black type at Awapuni this Saturday.

The daughter of Savabeel will take aim at the Group 3 Eulogy Stakes (1550m) following a solid effort in her North Island debut when runner-up last weekend over 1400m at Trentham.

“She was doing her best work late after she just struggled to quicken when they went slowly in front and she’s come through it well,” said Matthew Pitman, who trains the three-year-old with his father Michael.

“With Chris Johnson at Te Rapa on Saturday, she will be ridden by Michael McNab.”

Savvy Coup’s immediate future following her Awapuni outing has yet to be confirmed, but a return to Trentham next year is on her programme.

“At this stage, nothing is planned but obviously we have a New Zealand Oaks campaign in mind for her,” Pitman said.

Savvy Coup has been successful twice in a light career with both wins posted in effortless fashion during last month’s New Zealand Cup carnival.

Meanwhile, stablemate Son Of Maher also has northern targets early in the New Year on his programme following his close last-start seventh in the Group 1 Captain Cook Stakes (1600m).

“He’s probably better off with a fortnight between his races rather than three weeks,” Pitman said.

“He was a bit fresh, but in saying that he was only two and a-half lengths away at weight-for-age. In a handicap he would be getting seven and a-half kilos off Kawi and maybe that was a difference as well.

“He’ll definitely go on to the Anniversary at Trentham and the Thorndon Mile.”