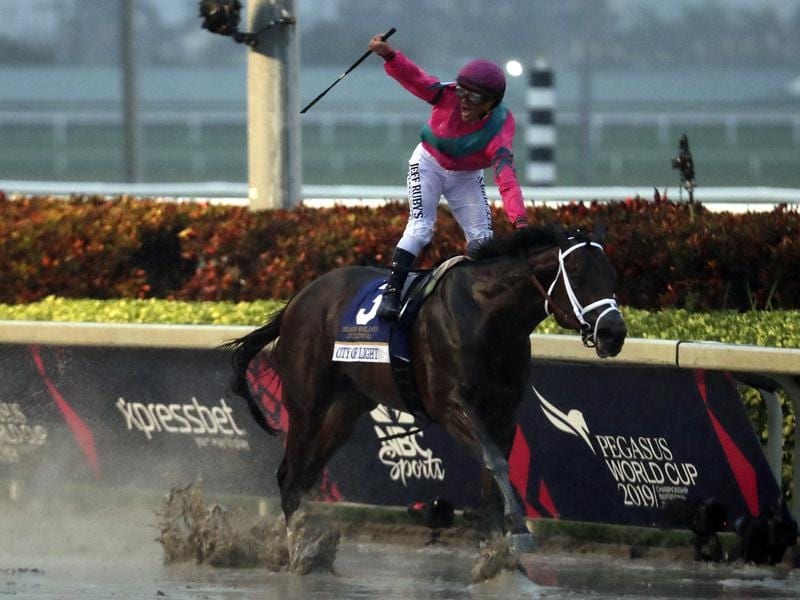 The Pegasus Cup, won this year by City of Light, will take a massive prize money hit.

The Pegasus World Cup at Gulfstream Park in Florida will have substantially reduced prize money from the previous three editions of the event with horses at the meeting to race free of medication.

The Stronach Group, which operates Gulfstream, announced the significant changes on Sunday.

“The Pegasus World Cup Championship Invitational Series is evolving toward a single goal – to provide a level of safety deserving of every horse and every rider, reflecting the new standard of care, on race day and beyond, while providing a lucrative opportunity for horse owners,” Stronach’s chief executive of racing, Craig Fravel, said.

The inaugural Pegasus in 2017 was then the world’s richest race, offering a $12 million purse to owners who put up $1 million for a spot in the field. The purse went to $16 million in 2018. And last year, the turf race was added, so purses went to $9 million for the dirt race and $7 million on the grass.

The moves come in response to some of the rising criticism the sport has faced over the past year – particularly after 37 horses died at Santa Anita, another track operated by The Stronach Group, since last December. Those deaths have sparked at least two investigations in California, including one by the Los Angeles County District Attorney’s Office.

The banning of race-day medication has been a major topic within the sport for some time, and a movement is afoot to phase it out gradually.

Starting next month, two-year-olds at many US tracks will not be permitted to take the commonly used diuretic Lasix within 24 hours of racing. Lasix is given to horses to prevent bleeding, though most international tracks do not allow it to be taken on race days.

By 2021, the Triple Crown races also will have the no-medication-on-race-day rules as well.

“We are investing in the future of our sport by creating new opportunities for horsemen and horses to run without medication,” Belinda Stronach, The Stronach Group’s chairman and president, said.