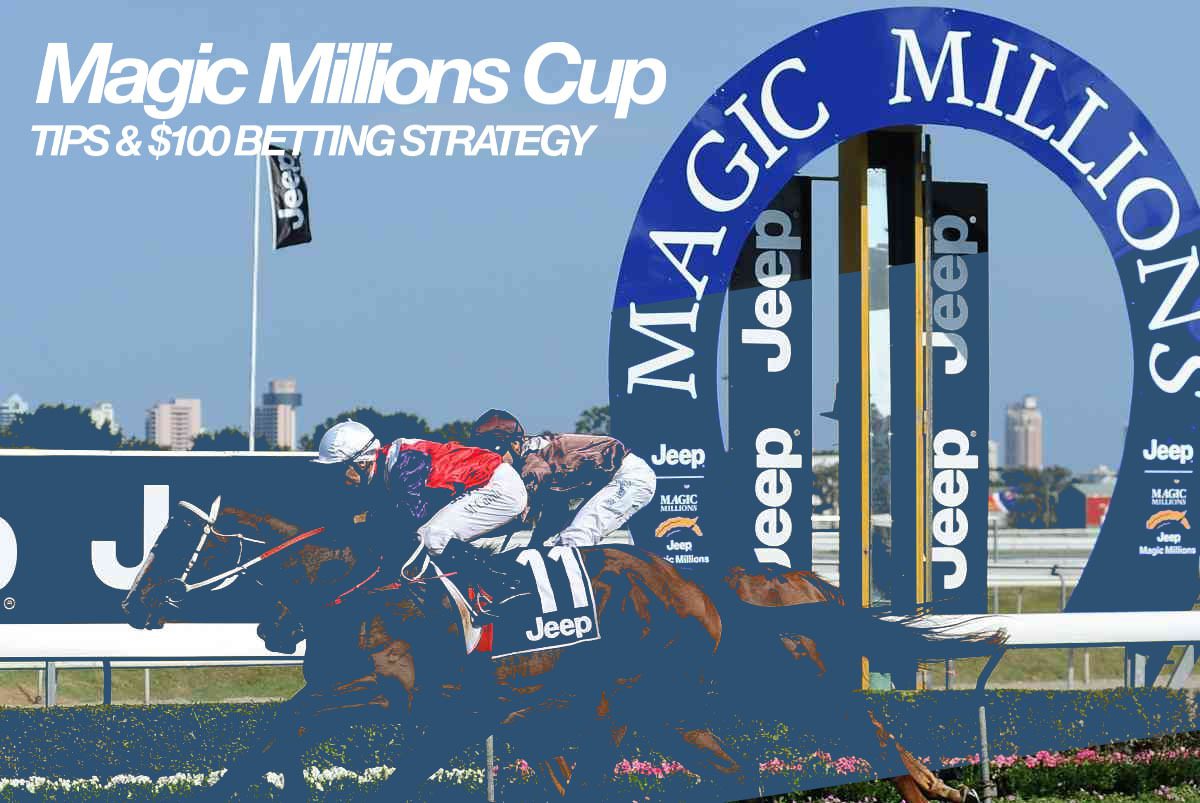 HorseBetting’s Queensland form analyst brings you his preview of Saturday’s $1 million Magic Millions Cup. The 1400m event has attracted a capacity field, with 18 starters and five emergencies. Apache Chase and Frosty Rocks will ensure it is a genuinely run 1400m, while Holyfield, Axe and Edison will be up there handy too. After a good win last time out, Kementari will line up as the $6 favourite, ahead of last year’s winner Eleven Eleven ($6.50), Nudge ($7) and Apache Chase ($7.50). Take a look at our top three selections and our $100 Betting Strategy.

Having run a fast-finishing third on New Year’s Day in the Nudgee Stakes (1200m) at Doomben, Chris Waller’s mare, Nudge, looks very well placed. The consistent five-year-old was back last on the inside of runners that day, on what was a Heavy 10 track, so she would have copped plenty of mud in the face which could have easily made her not want to try. But, to her credit, she really knuckled down late to get up and run third, attacking the line along the inside. The daughter of Fastnet Rock now rises from 1200m to 1400m which is going to suit, while she also drops 1.5kg in weight to 56kg. Having had nine starts over 1400m, Nudge has won once and placed on four occasions, with some of those minor placings coming in ultra-competitive races, including the 2021 Group 1 Tatt’s Tiara at Group 1 level behind Tofane. Nudge’s form around Count De Rupee and Icebath jumps off the page, while she is also guaranteed to get a good run in transit from barrier 12, just in behind a hot speed. This is well within reach for this good, honest mare.

Annabel Neasham will saddle up four-year-old gelding Holyfield in this year’s Magic Millions Cup, where he looks a live chance. The son of I Am Invincible has won five races, with four of them coming over this distance, including a last-start all-the-way win at Randwick. Down on the minimum weight of 54kg, Tim Clark is going to attempt to control this race from in front given the terrific barrier (3), however if Apache Chase and Frosty Rocks want to lead at all costs, he can box seat and let it play out in front of him. Holyfield has always shown good potential, so he will be coming into this full of confidence on the back of a great win last time out. The big weight drop of 7kg is going to be a massive aid, while the low draw ensures he gets every chance. The $17 with online betting sites seems overs.

He’s the horse everyone loves to hate, but after a terrific first-up win on New Year’s Day, Kementari is just about everyone’s new favourite horse. The seven-year-old son of Lonhro has won over $2.5 million in prizemoney thanks to a win in The Buffering at Doomben last time out, where he dived back to the inside to defeat Kiku and Apache Chase by half a length in the 1200m event. The James Cummings-trained galloper now rises to 1400m, which is arguably his favoured distance, while barrier four is going to present last year’s winning rider Nash Rawiller with the gun run. ‘Special K’ as he is affectionately known, took a fair while to break a run of outs, but he’s now won two of his past five starts, and is undefeated in 2022, so it could be his year. He does have to lug 61kg, but he has the rating to deserve that weight. His form is definitely good enough.