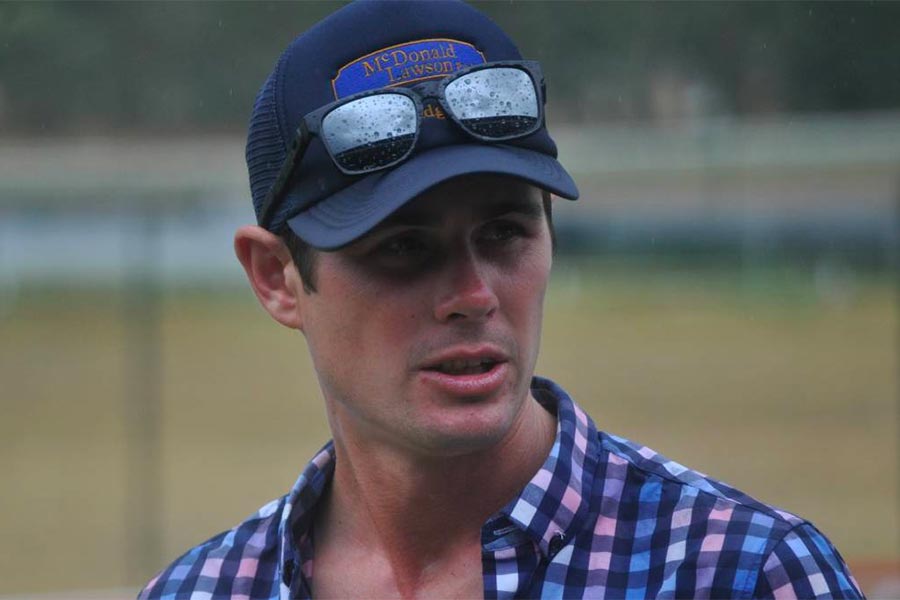 Born and bred in Coonamble, winning the $150,000 Western District NSW Country Championships Qualifier in his home town on Sunday would mean everything to Dubbo trainer Clint Lundholm.

Lundholm’s late grandfather John made his name as a trainer at Coonamble. The two were very close and Lundholm has fond memories of spending time at his stables and race riding for his Pop.

“It would be phenomenal to come home to your track and really do well in it,” he said.

“Even if we run a hole and make it to the ‘big dance’, we’d be stoked with it, but we’re here to win it.

“We’ve got a good team of horses headed this way and with having the family ties here and all my family, my friends, kids I grew up with here, it would be a great result.

“If we got lucky, I won’t say I won’t cry, I’m a pretty emotional guy, take it all to heart. The team has put in a tremendous job to have these horses where they are now.”

Lundholm has five horses ready to vie for their place in the Country Championships Final in the last qualifier on Sunday.

His team is headed by Activation, who won this race last year when trained by Kody Nestor, going on to finish 13th of 16 in the 2021 final.

“It was very exciting to get the call to pick this horse up with the Country Championships around the corner,” Lundholm said.

“With the excitement of getting him, there’s always the pressure too of being last year’s winner.

“He’s had a bit of an up and down start to this preparation, but he finished off really strong there at Dubbo four weeks ago and put them to the sword quite quick.”

The son of I Am Invincible surged home to win by a comfortable three lengths in a 1300m Open BM82 at Dubbo on January 31. Mathew Cahill rode him for the win and will again partner the gelding on Sunday.

Amulet Street was purchased from Godolphin as a tried horse specifically to aim for the Country Championships.

Since being in Lundholm’s care, the Epaulette gelding has had four starts for two wins and two seconds. With race fitness under his belt, three second places from as many starts over the 1400m in provincial company when trained by James Cummings, and Hugh Bowman booked to take the ride, he will certainly be one to watch.

Ferus was also purchased by Lundholm with the Country Championships in mind. Previously trained by Ciaron Maher & David Eustace, the Written Tycoon gelding has had two trials and one start for the stable leading into Sunday’s race. The five-year-old placed third of nine in a 1200m BM66 at Mudgee on February 27.

“I thought his run at Mudgee last start was super,” said Lundholm.

Ashley Morgan has ridden him in his two trials this preparation and will take the ride on Sunday.

Lundholm then has two three-year-old fillies vying for contention.

Stratum Star filly Watch Me Rumble is coming off a last-start win on February 13 at Dubbo over 1300m.

“She is a really nice type of horse, we’ve always had a really good opinion of her,” the trainer said.

“She won a race as a two year old, we put her in the paddock and brought her back with the Championships in the back of our minds.”

Lundholm’s other filly, Avalicious, also by Stratum Star, has plenty of race fitness coming into the event, having finished just out of the placings her last two starts over 1600m.

It is set to be another big NSW Country Championships Qualifier with a number of quality gallopers looking to claim a spot in the final at Randwick.

Lundholm confessed that Racing NSW initiatives, including increased prizemoney for country races in general and the establishment of events such as the Country Championships, had inspired him to chase hard for the $500,000 decider on April 2.

“We’ve grown from a stable who had probably seven in work in one barn, to building our own barn to now leasing another one off the track,” he said.

“We’ve got 40 horses in work there at Dubbo and we’re always hoping to grow on it. We’ve got a good team and we’re managing it really well.

“I think that’s the benefits of the racing with the prizemoney going up, it’s drawn more clients into country racing with the Country Championships, the Highways, there’s great incentives, big prizemoney on offer and everyone wants to be a part of it.”