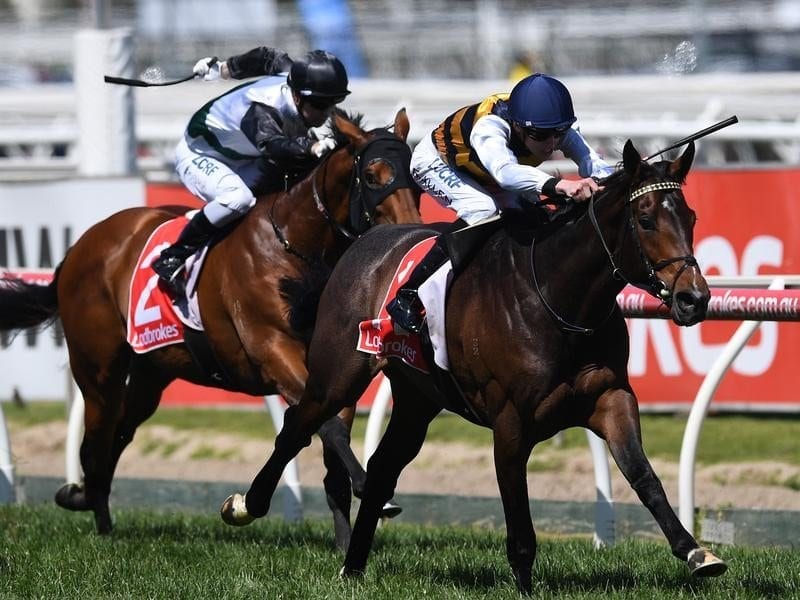 Lord Fandango has booked a berth in the Caulfield Cup with victory in the Herbert Power Stakes.

Lord Fandango has booked a berth in the Caulfield Cup with victory in the Herbert Power Stakes at Caulfield.

The Archie Alexander-trained stayer earned a ballot-free exemption into next week’s Group One handicap with his win.

Ridden by apprentice Ben Allen, Lord Fandango ($12) scored by a length from European-trained stayer Wall Of Fire ($9) with Gallic Chieftain ($4.60) a long neck away third.

Lord Fandango drops to 50kg in the Caulfield Cup and is eligible to be rehandicapped.

“It would be very hard not to run but we’ll have to see how he pulls up and then make that call,” Alexander said.

“With 50 kilos in the Caulfield Cup you’d have to think we’d go there.”

Formerly prepared in England by Jeremy Gask, who has recently returned to Australia, Lord Fandango was having his sixth start for Alexander.

He has graduated from winning a Ballarat benchmark 78 race, to success in the Benalla Cup to giving Alexander his biggest victory in Saturday’s Group Two race.

“Two of the three times he’s won he’s been out of the handicap which the stats experts will tell you is hard to do and he’s done it twice,” Alexander said.

“So he’s obviously a serious horse.”

Alexander said Lord Fandango had not been nominated for the Melbourne Cup saying the stayer was considered too young and immature for this year’s race.

English trainer Hugo Palmer said Wall Of Fire, currently 31st in the order of entry into the Melbourne Cup, would go into that race without another start.

Wall Of Fire came from last on Saturday and Palmer said the stayer would be outsped in the Caulfield Cup and would also benefit with an extra week between races.

Racing Victoria stewards reported post-race he was suffering from the thumps and an internal bleed.