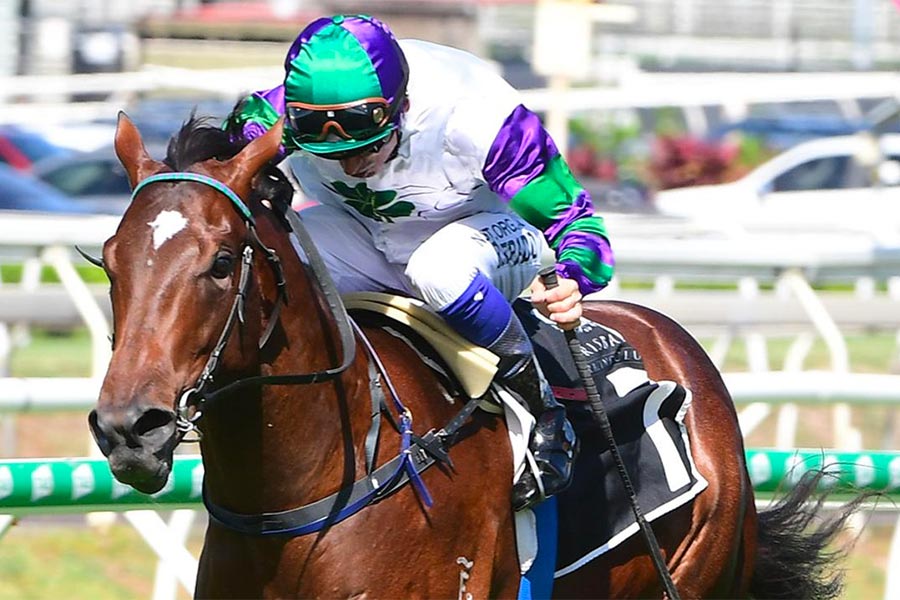 Apprentice Jaden Lloyd teams up with one of Queensland’s top two-year-olds, Alpine Edge, at Eagle Farm on Saturday in a last-ditch bid to win QTIS money before the new racing season begins on Sunday.

A winner of $600,000 in prizemoney in just four career starts, the Group 3 winner won both the Listed Phelan Ready Stakes and the Group 3 BJ McLachlan Stakes in December before finishing second to Shaquero in the Gold Coast Magic Millions 2YO Classic.

Lloyd has been booked on Saturday to make use of his 3kg claim, which will see the quality colt in this 1200m 2YO Handicap with just 60kg as a $5 equal-favourite.

Fellow South African Robbie Fradd has been the sole hoop aboard Alpine Edge in all three of his Queensland runs, while Glen Boss took over the reins in the Todman Stakes at Randwick when seventh to Anamoe.

“He’s not my ride, I’m sure Robbie (Fradd) will get back on him eventually, but I’m pretty happy to get on and get a feel of him on Saturday.”

Alpine Edge will have to overcome barrier 12 in the field of 13, but that should not be too much of an issue for an adaptable colt who has won races both on the speed and from near the tail end.

“I think we’re probably going to have to go back.

“He’s only first-up and he’s got the 63kg, you can’t gas them and then if you’re caught three-wide then you’re screwed.

“I think Toby (Edmonds) wants to go back; if he can be in front of a couple then that would be ideal.

“If he’s only four of five lengths off them coming into the straight, I’m pretty confident he’ll pick them up anyway.”

It will be a day of firsts for Lloyd, who also partners Stuart Kendrick’s Way Beyond in the following race on the program.

The three-year-old gelding finished second to Front Money at the Sunshine Coast first-up this campaign and now will be hoping to win QTIS 3YO prizemoney for the final time.

“I haven’t really had a look at his replays yet, but I actually spoke to him (Stuart Kendrick) the other day and he’s pretty bullish about his chances,” Lloyd said.

“It’s a pretty open field than what it looks on paper, but he’s got a good gate, so I’m sure he’ll run well.”

Way Beyond is an equal second-favourite at $6, giving Lloyd strong contenders in two competitive races at Eagle Farm this weekend.