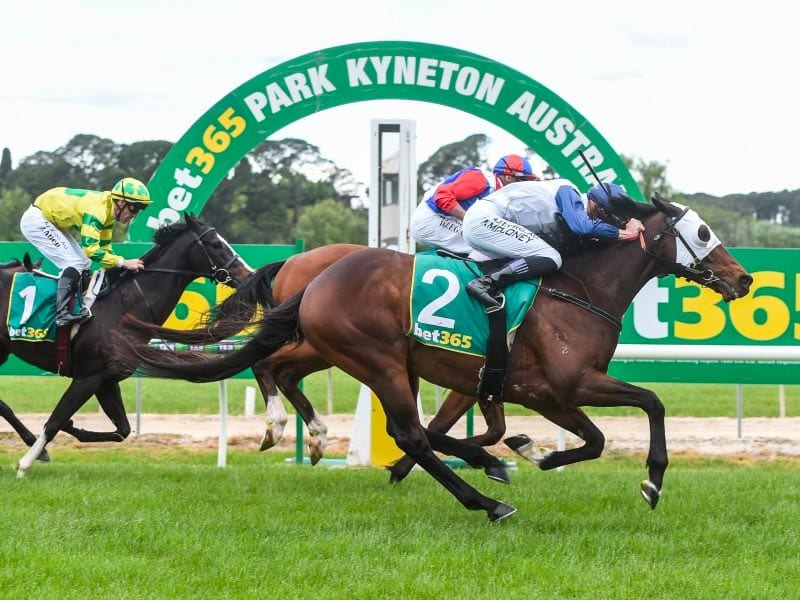 HorseBetting’s Victorian form analyst presents his best bets, quaddie numbers and odds comparison for the nine-race card at Kyneton on Monday afternoon. The track is rated a Heavy 9, with the rail returning to the true position, for the meeting getting underway at 12:30pm AEST.

The Mick Price & Michael Kent Jr-trained Free Market is set to go around as a short-priced favourite following a close up third when first up at Geelong on September 17. Having settled just off the speed at that first up run, the three-year-old son of Capitalist was only beat 0.2 lengths in what was a bunched finish. Despite their being plenty of the unknown with a majority of the field being first starters, it is hard to see how the race day experience albeit only two career starts don’t benefit his chance here. From barrier nine, Zac Spain will need a touch of luck early to find a spot close to the speed and if he is afforded that he looks a clear best bet on the Kyneton card with form around the smart Northern Melody.

Next Best at Kyneton: Social Star

Mathew Ellerton and Simon Zahra send their three-year-old filly Social Star back to the Kyneton 1200m following a close up second at the track and distance on September 21. Having settled three wide with no cover up on speed, the Astern filly managed to work home with intent and despite going down in the final 50m, she was clearly one worth following. With form behind Xtra Gear on debut, she clearly has above average ability and by the looks of it she will handle the Heavy 9 going. From barrier 14, Damian Lane will go forward on the filly and prove too hard to run down.

Fresh off a near six-month spell, the Mathew Ellerton and Simon Zahra-trained Derive looks well placed to bring up a first up win with a strong wet track record behind her. The four-year-old Redoute’s Choice mare has three second place finishes and a third-place result from four runs on rain-affected going and we anticipate this will be her time to breakthrough for a second career win. With form behind Australasian Oaks winner Media Award at her last start, we anticipate she will appreciate going around in this BM64 race over 1200m.