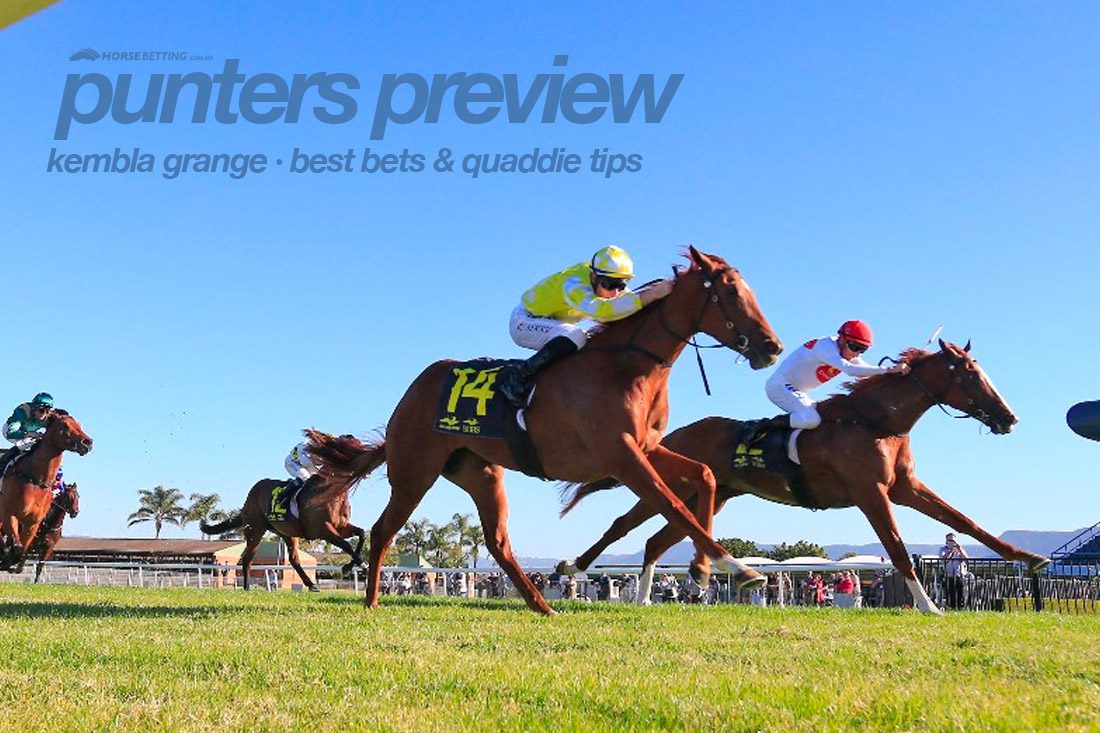 HorseBetting’s New South Wales form analyst has taken a look at the seven-race card at Kembla Grange on Tuesday afternoon and brings you his best bets and quaddie numbers, along with odds from Australia’s top betting sites. The track is currently a Good 4, while the rail is out 6m for the entire course, so horses that race handy to the speed could be favoured. The first race will get underway at 1:15pm AEDT.

In the second race of the day, Tracey Bartley saddles up Sebrenco in a Benchmark 64 over 1000m. The three-year-old filly has made a good start to her racing career, having had four starts for two wins and two seconds. The daughter of Sebring showed plenty of ability on debut almost 12 months ago to the day at Quirindi before being tipped out for a spell. Bartley then bought her back in during the winter months, when she recorded back-to-back seconds on Heavy 10 tracks before getting on to a Good 4 deck at Wyong and leading all of the way to win well over 1200m. Sebrenco finds a dry deck on Tuesday, has a good young rider in Dylan Gibbons booked, and although barrier seven is not ideal, she should have the speed to lead and be in the best part of the track.

Four-year-old gelding Mentalism probably should have won a race by now, but his 10th start looks to be a great opportunity for him to break through. The Gwenda Markwell-trained son of So You Think has been beaten by some decent gallopers including Duais and Bruckner, who have both performed at Group level since. Although Mentalism has only ever made the placings on wet tracks, the three times he has raced on a dry track have arguably been against the toughest fields he has faced, so we are willing to forgive him for that as he gets onto a Good 4. From barrier two, Keagan Latham will have him prominent, which will give him every chance to record his first career win.

As with Mentalism, connections of Baranof would have been hoping he’d have won a race by now, especially given he ran second to Profiteer in the Inglis Millennium as a two-year-old in just his third career start. The 10-start maiden has some very good formlines behind horses like Shaquero, Brigantine, Construct and Mars Mission, so the $9 on offer at Sportsbet does represent good value. The son of Hinchinbrook was disappointing over the Warwick Farm 1200m at his most recent start, but he now gets out over a bit more of a trip (1300m) for the first time and, most importantly, comes back to provincial level. Regan Bayliss can find a nice spot midfield with cover from barrier seven and allow this three-year-old to wind up down the Kembla Grange straight to get his first win out of the way.