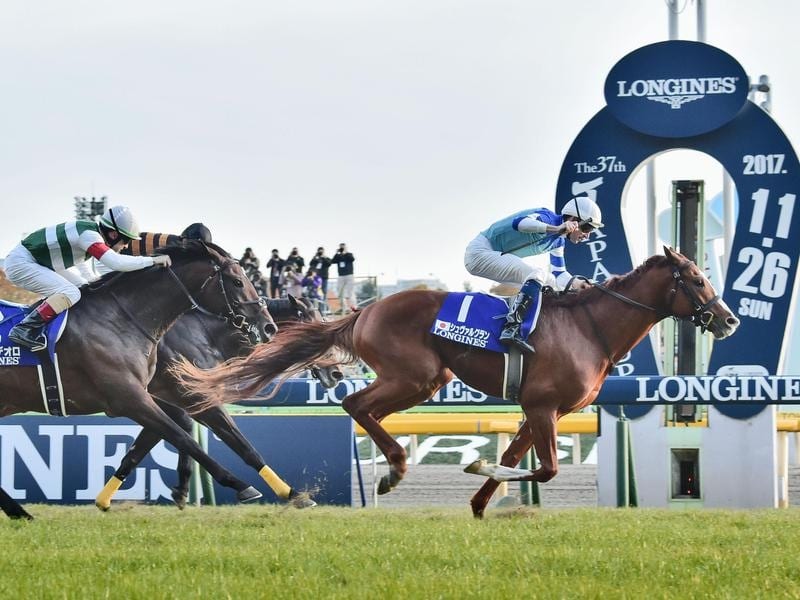 Cheval Grand (r) winner of the 2017 Japan Cup, will run in the Group 1 Juddmonte International at York.

Cheval Grand will aim to become the second Japanese horse to win a Group One race in England this season when he runs in the Juddmonte international at York.

Deirdre won the Nassau Stakes at Goodwood last week to become the only other Japanese horse apart from 2000 July Cup winner Agnes World to win at the top level in England.

The seven-year-old Cheval Grand, who won the Japan Cup in 2017 for Australian jockey Hugh Bowman, has raced once already in Britain when midfield in the King George won by Enable.

“Cheval Grand is in very good form. He’s training towards York and we’re trying to get him better than last time,” Yusuke Oe, assistant trainer to Yasuo Tomomichi, said.

“The ground was too soft for him in the King George. It was very unfortunate that it kept raining from the night before until the afternoon of the race and it was too slippy for him. He is a horse who prefers firm ground.

“He will have another few gallops before York. He was fit in the King George, but he was beaten by two very brilliant horses in Enable and Crystal Ocean.

“Last month I visited York myself to see the racecourse and meet with the clerk of the course, William Derby. It felt like a racecourse with a good atmosphere.”