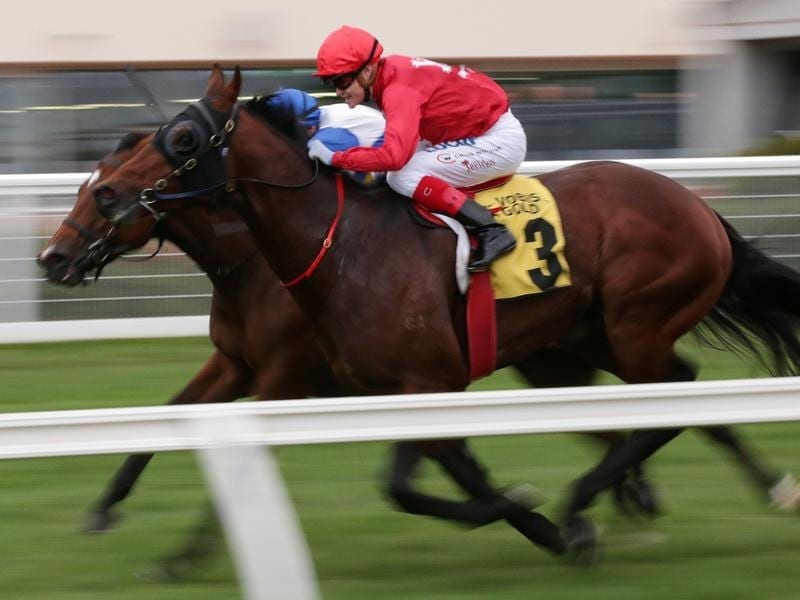 Iconoclasm (closest) has returned to racing on a winning note for new trainer Danny O’Brien.

Loftier targets are in the sights of the connections of Iconoclasm after scoring a first-up win for his new trainer at Caulfield.

Iconoclasm was having his first run for Danny O’Brien when successful in Saturday’s VOBIS Gold Sprint.

Providing Craig Williams the second leg of a double, Iconoclasm ($2.90) scored a short-head win from Miss Vixen ($15) with the $2.40 favourite Miss Leonidas 1-1/4 lengths away third.

Gleeson said Iconoclasm had undertaken the bulk of his preparation at O’Brien’s Barwon Heads property before transferring to the Flemington base in the past couple of weeks.

He said Iconoclasm was a gross horse that did a lot of his early work in the deep sand at the beach.

“We were forward enough to win today but with plenty of room for improvement,” Gleeson said.

Gleeson said Iconoclasm was likely to head to Brisbane early next month for the first of three runs in Queensland, culminating in the $1.5 million Stradbroke Handicap on June 8.

“Danny’s got a couple of more runs planned for him,” Gleeson said.

“He may go two-week breaks between runs and that leaves us six weeks to the Stradbroke.”