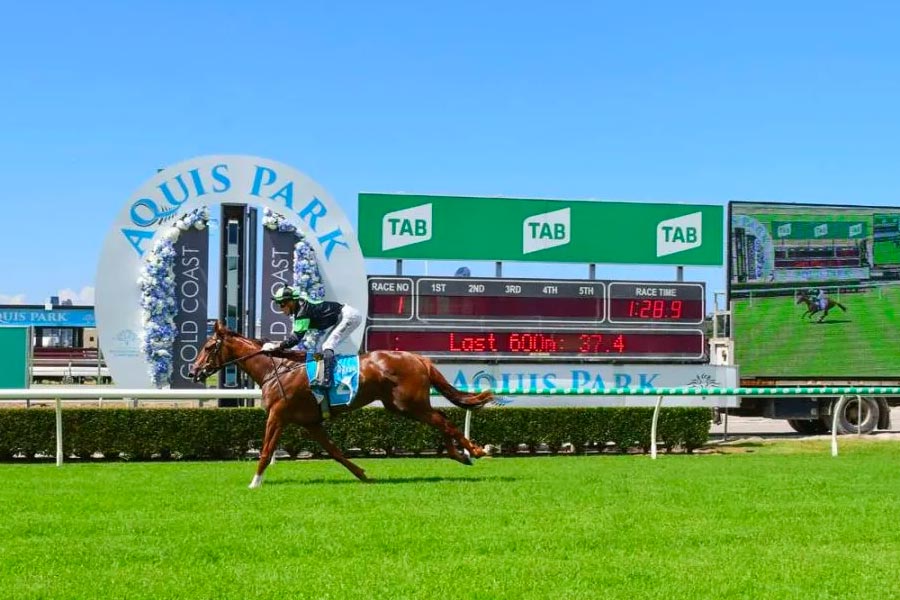 Steven O’Dea and Matt Hoysted will saddle up Secret Tales in the opening race of the day at Eagle Farm on Saturday in a bid to win some valuable QTIS money.

The three-year-old filly has won two of her three races, including a dominant 18-length victory at the Gold Coast in March and a 1.75-length win at this track over 1400m.

The daughter of Spill The Beans is yet to race over a distance shorter than 1200m which will be a new challenge on Saturday, with her co-trainer admitting that it may be too short for the $3 second-favourite.

“That’s obviously the main concern, obviously she’s never run over (1000m), her first start was over 1200m and then her next two were at 1400m, so that’s the main sort of worry,” Hoysted told HorseBetting.com.au.

“She’s definitely come back a lot more switched on; she’s a lot more sharper this time in.

“It’ll still be a heavy worry whether they’re a bit too sharp; especially with a couple of quick horses in the race as well.”

While there are no real instructions for Stephanie Thornton, who will partner the filly from barrier three, Hoysted hopes to see his runner finishing off strongly at the end of the 1000m.

“As long as she’s doing her best work late, it’s another lead into a 3YO Plate in a couple of weeks’ time over 1200m and she’ll improve once she gets up in trip,” he said.

“From that gate she’ll be back in the second half of the field, just a matter of hopefully we’re not having to chase her along and she can have a chance to actually travel and give her a chance to finish off.”

Despite conceding that the 1000m journey may bring Secret Tales undone, Hoysted is upbeat about the fact that she has already won at Eagle Farm.

“Eagle Farm is definitely a horses-for-courses sort of track and the fact that she’s got the win on the board, that’s a big tick in her favour.

“We know she handles the track, but as long as she can hold a position and have a chance to travel, that’s going to give her a chance to finish off.

“There’s no question that she’ll be finishing off strongly, it’s just whether they’re a little bit too sharp for her over the 1000m.”

One horse in the O’Dea-Hoysted stable that has no issues with the 1000m course is their stable star, Shooting For Gold, who recorded his seventh career win at start 11 last weekend at Doomben.

The 0.75-length victory made it three straight victories for the son of Shooting To Win this campaign, with the four-year-old now spelling before the Summer Carnival.

“He’s gone out; he went to Kolora Lodge on Monday,” Hoysted said.

“He pulled up really well on the back of Saturday, so he’ll just have a few weeks out there now and he’ll come back for an assault on the Summer Carnival, with I guess the traditional sort of lead-ups to the Magic Millions Carnival, culminating with the Magic Millions Sprint has his main target.

“He’s one that just keeps improving, and as you said, he’s definitely the punter’s pal so hopefully he can continue that form once we step him up in class.”

The Magic Millions Sprint will be Shooting For Gold’s main target in the near future, but Hoysted is hopeful that his ultra-consistent gelding can reach new heights in next year’s Brisbane Winter Carnival.

“He’s obviously been ultra-impressive in winning the races he’s won, but he’s probably still yet to really tackle those top liners, so with this break under his belt now, he’s only going to come back even better,” he said.

“The next 12 months is probably when he’s going to be at his best, so it’s a matter of this next prep is to really test the waters to see where we really fit in once we go up against some of these better horses, this will give us a bit of a guide.

“If he was to continue to improve and keep winning, then it’s something we can start really considering some of these better races in our Winter Carnival, but it’s a matter of wait and see and not get too far ahead of ourselves just yet.”