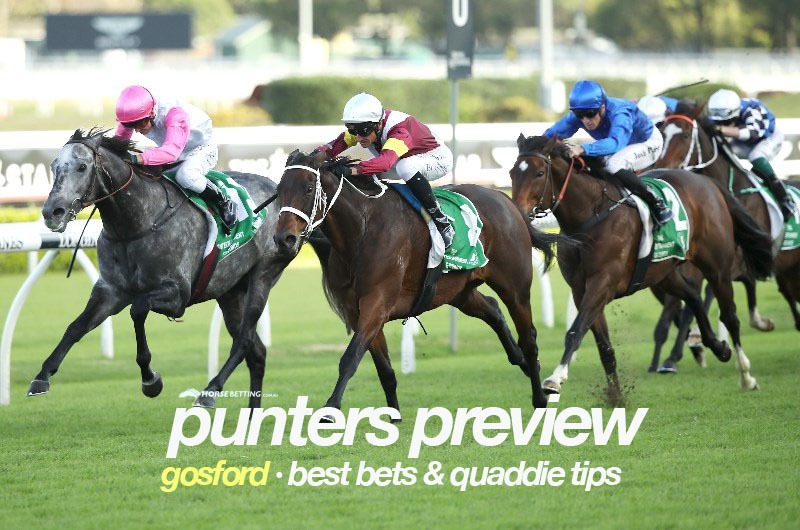 Midweek metropolitan racing in New South Wales heads to Gosford on Wednesday for a six-race program. HorseBetting’s New South Wales form analyst brings you his best bets and quaddie numbers for the meeting, along with odds from the top-ranked betting sites. The track is rated a Good 4, and the rail is out 2m from the 1100m to the 300m and then true for the remainder of the course. Racing gets underway at 1:45pm AEDT with the running of a Fillies & Mares Maiden Plate over 1100m.

Bjorn Baker and Rachel King combine in the penultimate with the unbeaten Shades Of Rose. The three-year-old daughter of Rubick won easily on debut at Bathurst on January 25 over 1100m, before beating the track record over the exact same course and distance at her second career start, improving her previous time by 1.48 seconds. She led at a brutal tempo on that occasion and was able to maintain the high speed all the way to the post, winning by over 7.5 lengths. From barrier five, King will look for the front in a race where there isn’t too much speed. The filly’s stablemate Turnstyle also likes to go forward, but we doubt we will see the two Baker-trained runners cut each other up in front. We are confident that Shades Of Rose can remain undefeated.

Next Best at Gosford – Swift Sweet

Fresh off winning the Group 3 Millie Fox Stakes with Expat, Mark Newnham and Tommy Sherry will be looking to continue a solid partnership on Wednesday when they team up with Swift Sweet in the second race. The two-year-old filly has only raced once, leading on debut to run third at Rosehill on November 17. Over the past three weeks, the youngster by Snitzel has trialled twice, finishing behind Xtravagant Star and Ebhaar, which looks good form on paper. From barrier two, Sherry is likely to look for the lead once again, which could make Swift Sweet quite hard to run down over the 1000m around Gosford. Newnham has opted to remove blinkers for the first time, so she shouldn’t be as fired up, while the 1kg claim from Sherry sees her in with just 54kg.

Chris Waller saddles up four runners in the first leg of the quaddie, and although Galifianakis is the outsider of the quartet, we are pretty confident that he will get the job done. The four-year-old son of Dandy Man was quite impressive on debut over 1400m, despite being beaten by Notabadbuy. What we liked about that run was that the debutant was off the bridle for a long way, but he kept grinding away at the task before surging late. To us, that suggests the gelding should relish the rise to 1600m, while he should be all the better for the raceday experience. Nash Rawiller will do the riding on this four-year-old, which is a great booking for a horse who may need a strong rider. From barrier six, Galifianakis should get the right run in transit and be able to finish off too well. The $7 at Sportsbet appeals strongly.