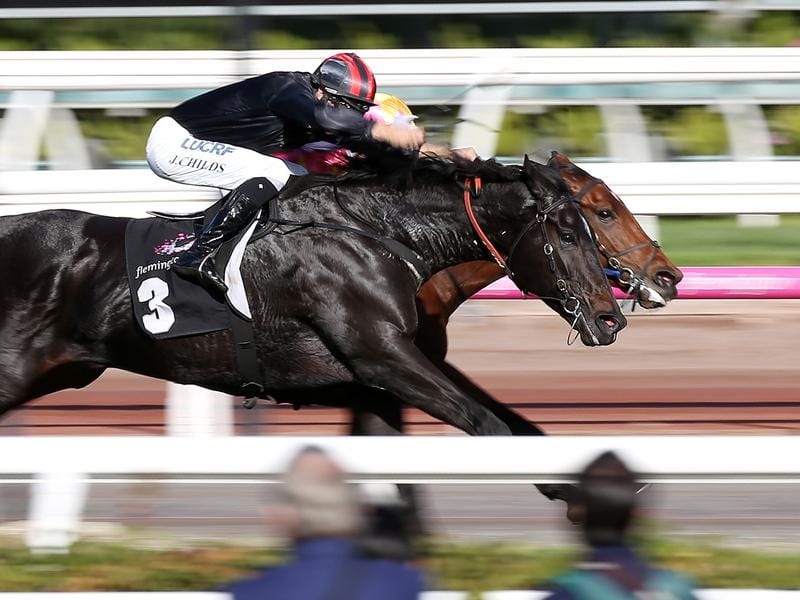 Galaxy Raider (black) is ready to make his latest comeback from injury at Pakenham.

The past 12 months have not been plain sailing for Galaxy Raider and his trainer Grahame Begg.

Just as the gelding was building to a win in his last campaign, Begg was forced to abandon the preparation.

Galaxy Raider has raced only three times in the past 18 months and runs for the first time since winter at Pakenham in the VOBIS Gold Bullion (1400m) on Saturday.

The gelding was at the start of his second campaign for Begg when he had a fall at Flemington on Melbourne Cup day last year that resulted in his jockey Jordan Childs being suspended.

That fall pushed Galaxy Raider to the sidelines after which he had a slow build-up for a racing return.

After two trials Galaxy Raider made his comeback at Flemington, finishing midfield over 1200m on May 4. He returned to the same track on June 22, finishing third, again over 1200m.

That run showed Begg Galaxy Raider was on target and ready to pounce, before injury struck.

“He was about ready to have his third run and he popped a splint bone,” Begg said.

“So we then had to give him more time off. We had to wait around eight weeks for it to settle down again before we could get him going.”

To prepare for his latest return, Galaxy Raider ran in a Cranbourne trial on heavy ground on November 11 before contesting a Pakenham jump-out over 1000m last week.

“It was on the Polytrack. It wasn’t ideal, but they had them on and it gave him another day away,” Begg said.

“It was enough to keep him ticking over and have him near right for Saturday.

“You would think he can be competitive up to his best form, but Widgee Turf looks well treated in the race.

“He (Widgee Turf) actually gets in well in all these races under the set-weights and penalties, but when you get these opportunities you have to give them a try.

“He seems in good form and he can run well fresh for us.”