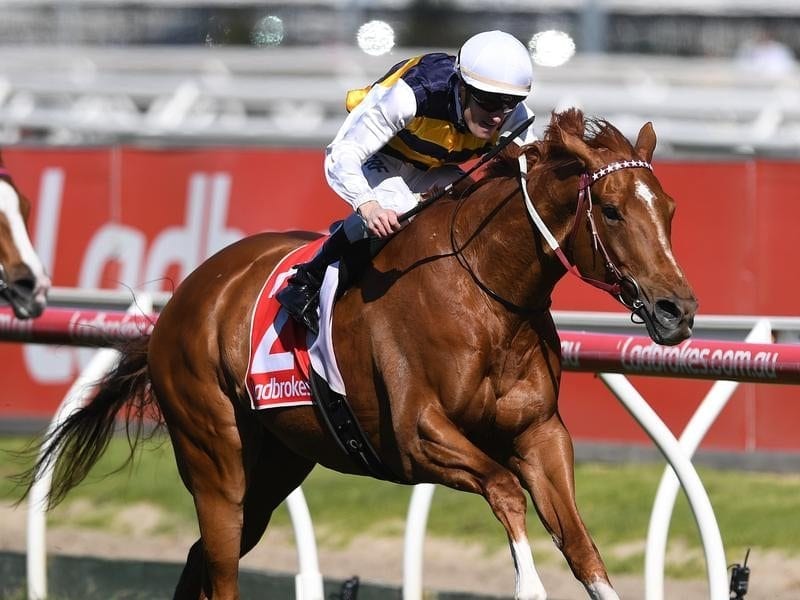 Gailo Chop has won the Caulfield Stakes, his second Australian Group One race.

Gailo Chop will take on champion Winx in the $3 million Cox Plate after capping his comeback from injury with a Group One win in the Caulfield Stakes.

The former French-trained Gailo Chop ($5.50) controlled Saturday’s 2000m race from the front under jockey Mark Zahra and beat the fast-finishing international visitor Johannes Vermeer ($31) by half a neck.

New Zealand horse Jon Snow ($8.50) was third, another 2-1/2 lengths away, after racing on the pace while Caulfield Cup favourite Bonneval ($3.70) settled back in the field before working home between runners for sixth.

Gailo Chop was having his fifth start this campaign since his return from a tendon injury suffered in Dubai in March 2016, and trainer Darren Weir said the seven-year-old had been building to his performance on Saturday.

“He has got fitter and stepped up in distance and it just looked like a race today that if he could get to the front he would be able to control it,” Weir said.

“He got some cheap sectionals down the back and then gave a good kick.

“He might not have wanted it to be much further but the winning post is there for a reason.”

Gailo Chop will run in the Cox Plate at Moonee Valley in two weeks but Weir is realistic about his chances against champion Winx, who won last week’s Turnbull Stakes by 6-1/2 lengths.

Winx has won her past 21 starts and is the $1.20 favourite to win a record-equalling third Cox Plate.

“He’ll go to the Cox Plate for sure,” Weir said.

“Obviously it will be good to have a runner in the Cox Plate but when you see Winx last week, it will be hard for anything to beat her.”

Gailo Chop campaigned in the 2015 Melbourne spring for French trainer Antoine De Watrigant, running eighth in the Cox Plate before winning the Group One Mackinnon Stakes.

His win on Saturday added to a big day for syndication company OTI Racing, whose colours were also worn to victory by Aloisia in the Group One Thousand Guineas and Lord Fandango in the Herbert Power Stakes.

The Aidan O’Brien-trained Johannes Vermeer has firmed to the third line of Caulfield Cup betting at $8 after his eye-catching Australian debut, with Bonneval the favourite at $5.50.