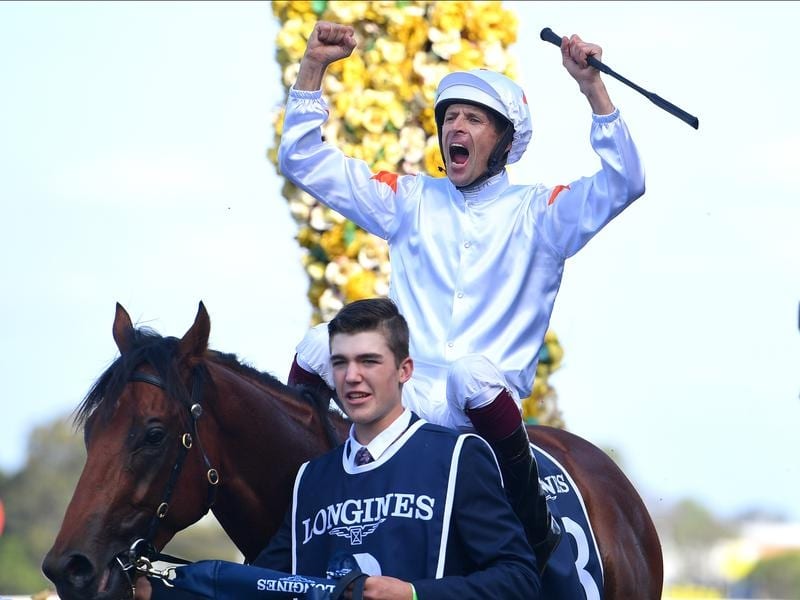 Farnan has given jockey Hugh Bowman a first Golden Slipper win and Gai Waterhouse a seventh.

Without the fanfare that has accompanied her previous six wins, Gai Waterhouse has claimed a record seventh Golden Slipper.

Saturday’s showpiece meeting was held at Rosehill with no spectators, and no Waterhouse who preferred to let her training partner Adrian Bott soak up Farnan’s win as she watched from home after recovering from surgery.

Under strict bio security protocols surrounding coronavirus pandemic, the meeting went ahead with essential personnel only allowed on course.

The colt also gave champion jockey Hugh Bowman his first Slipper and he produced a masterful ride to win, leading all the way over the 1200m dash.

After drawing wide, Farnan lost favouritism but by race time punters had rallied and he went out the top pick at $4.80.

Once he crossed over, Farnan had the race in control and went on to beat Away Game and Mamaragan.

“What a thrill, I’m very honoured and very humble to do it alongside a legend,” Bott said.

“For her to have six Golden Slippers, and now seven, and to do it with her, and with a colt with such quality, it’s really special for all involved. She makes it easy because she just expects you to win.

“She’s as confident as ever. Maybe I worry a little bit more, but she’s always been confident and it is comforting to have that person alongside you who has been there and done it before so many times. Even down to the tactics, being dominant from that draw, was never a worry.

“He showed that tactical speed that he has always had and was able to control the race.”

Bowman is known for winning four Cox Plates among many other Group One races on Winx, but admitted the Slipper was up with his biggest moments.

“I’d just like to congratulate Gai and Adrian and their team for the preparation to develop this horse to behave and race the way he did this afternoon was second to none.

“I’ve been lucky enough to ride some really good horses over my career as everyone knows but I haven’t ridden a better two-year-old.

“Just his mannerisms and his professionalism that is one thing but his ability is another.”

“Sydney has been my home since I started riding and this is the signature race for me growing up and to win it – I’m just lost for words and so proud and thankful to connections to instil the trust in me to do the job.”

Bowman finished second in the race last year and third on the Waterhouse-trained Meurice.

“I was forever disappointed with myself on Meurice who Gai trained in 2007 when I was doing the bulk of her riding so to get the opportunity to repay her, it’s great,” he said.

And it’s great for Adrian as he’s doing all the groundwork with the guidance of Gai.”

Waterhouse shared the previous record with her trainer father, the late TJ Smith and that is how she wants it to stay.

Earlier in week she said she would always have six and she and Adrian would have one if Farnan was successful.

But that is not how she will be remembered. As Bart Cummings will likely always be the most successful Melbourne Cup trainer, the Slipper is hers.