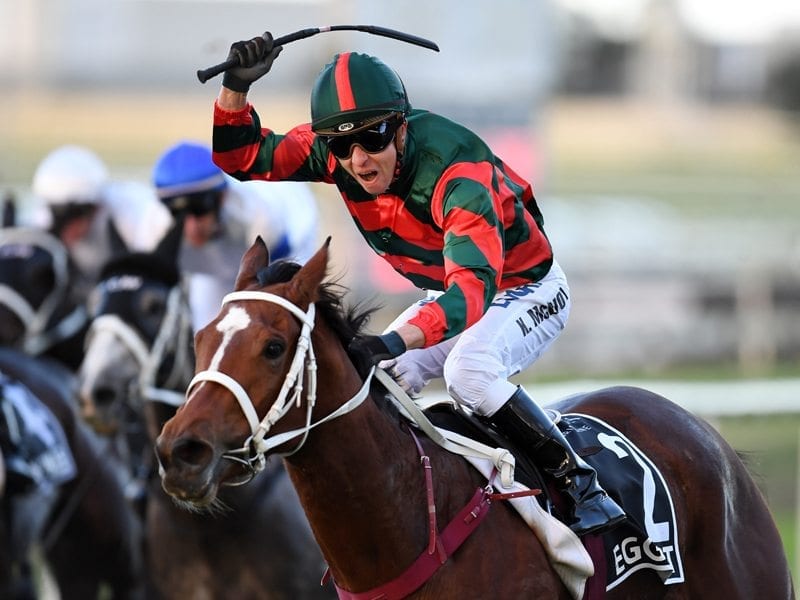 Egg Tart has extended her winning sequence with a victory in the Group One Queensland Oaks.

Egg Tart could follow a similar path to her champion stablemate Winx after a brilliant win in the Group One Queensland Oaks at Doomben on Saturday.

Trainer Chris Waller won his second Queensland Oaks after his great mare Winx took the race in 2015 when it was also run at Doomben.

Waller, who had seven runners in the race, immediately ruled out backing up Egg Tart in the Queensland Derby next Saturday.

But he is looking towards the spring with Egg Tart who made it six wins in a row.

Waller has made a point of not comparing Egg Tart to Winx.

“After Winx won the Queensland Oaks we ended up chasing the Epsom at Randwick. It was probably because the Epsom was put up to being worth $1 million,” Waller said.

“It is the type of race we will probably look at with Egg Tart.”

Waller said he liked Egg Tart because she was a consistent horse who liked racing.

“When she won a race at Flemington three starts back I began to think she was a genuine Group One horse,” he said.

“She travelled well down there and handled everything about it.”

Winning jockey Kerrin McEvoy brought up his eighth Group One of the season to make sure he will finish second on the Australian list behind Hugh Bowman.

“Egg Tart is a fantastic filly. She had a turn of foot to get me out of trouble after we got caught behind some slow ones,” McEvoy said.

“I think she has a big future and I am looking forward to the spring,” he said.

Tommy Berry is predicting a big future for Pygmy who ran home strongly.

“She is coming out of two provincial races into a Group One,” Berry said.

Blake Shinn said his mount Oklahoma Girl had been brave in the drive to the line but Egg Tart had been too good.