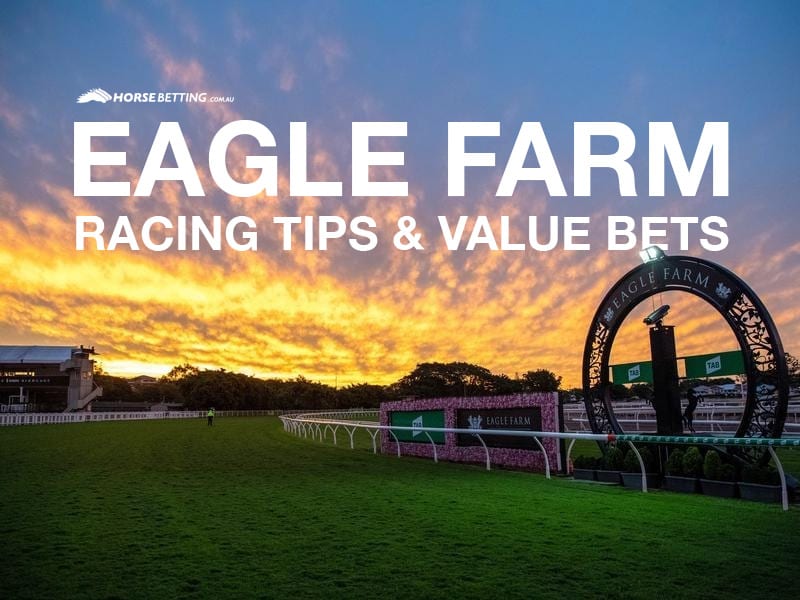 HorseBetting’s Queensland tipster brings you his best bets and quaddie numbers for Eagle Farm on what is the final day of the 2020/21 racing season this Saturday. The track is rated a Good 4, the rail is out 3m for the entire course, and the first of nine races is due to go off at 11:28am AEST.

Three-year-old Titled Tycoon lines up in what is an open Class 3 Plate over 1800m. The Richard & Michael Freedman-trained gelding was dominant when winning at Newcastle two starts back over 1500m, before coming to this track and trip on July 17 when third behind the impressive Victoria Park. From that race, we saw Eeloh go on to win impressively at Doomben on Wednesday and Lethal Warning finish third in the same race; those two gallopers ran second and fourth respectively behind Titled Tycoon. Taylor Marshall did the steering on this son of Written Tycoon last time, and after working early to find a spot outside a decent tempo, he was just left in front too early in the straight, with barrier nine of 11 playing a big role. Andrew Mallyon will take over on Saturday, and from barrier three he should get a much kinder run in transit and be able to save his finishing dash for the last furlong.

Next Best at Eagle Farm: Matowi

Matowi was one we were keen to follow from the same meeting that Titled Tycoon comes out of a fortnight ago. The Chris Waller-trained gelding was beaten in the smallest of photos to Boomsara over 1200m, with the post just arriving too soon for the son of Ocean Park. The five-year-old rises to 1400m on Saturday, which should be beneficial even though he has never placed at the trip in five attempts. Ron Stewart replaces Luke Dittman in the saddle, and the 2kg drop to 54.5kg should see Matowi even more competitive. While there is not a great deal of speed in this race, barrier five will allow Stewart to settle a touch closer than we usually see from this runner, which will give him less work to do over the concluding stages. Both of this gelding’s runs at Eagle Farm have resulted in runner-up efforts, so we are hoping he can go one better in this Open Handicap.

We’re big fans of the horse Bundyandcoke and potentially even bigger fans of the drink, so we are hoping the $14 shot can salute and cover any bar fees for the remainder of the afternoon. The Trevor Miller-trained three-year-old was luckless first-up at Eagle Farm over 1200m when fourth, beaten under 2.5 lengths. Micheal Hellyer rode him that day and admitted he should have come to the outside originally, but he was not done any favours by the tiring race favourite. Out to the 1300m will suit this son of Shamus Award, and his two wins on Heavy tracks over 1200m bode well. Barrier 12 is far from ideal, but we expect James Orman, who is the only jockey to win on this horse, to give him a good ride from towards the rear of the field. There is plenty of speed on paper from the likes of Bohemian Boom, Bondi Beau, Gdansk and Super Gorgeous, so we are hoping the strong tempo can set it up for a backmarker like Bundyandcoke to swoop over the top of them.