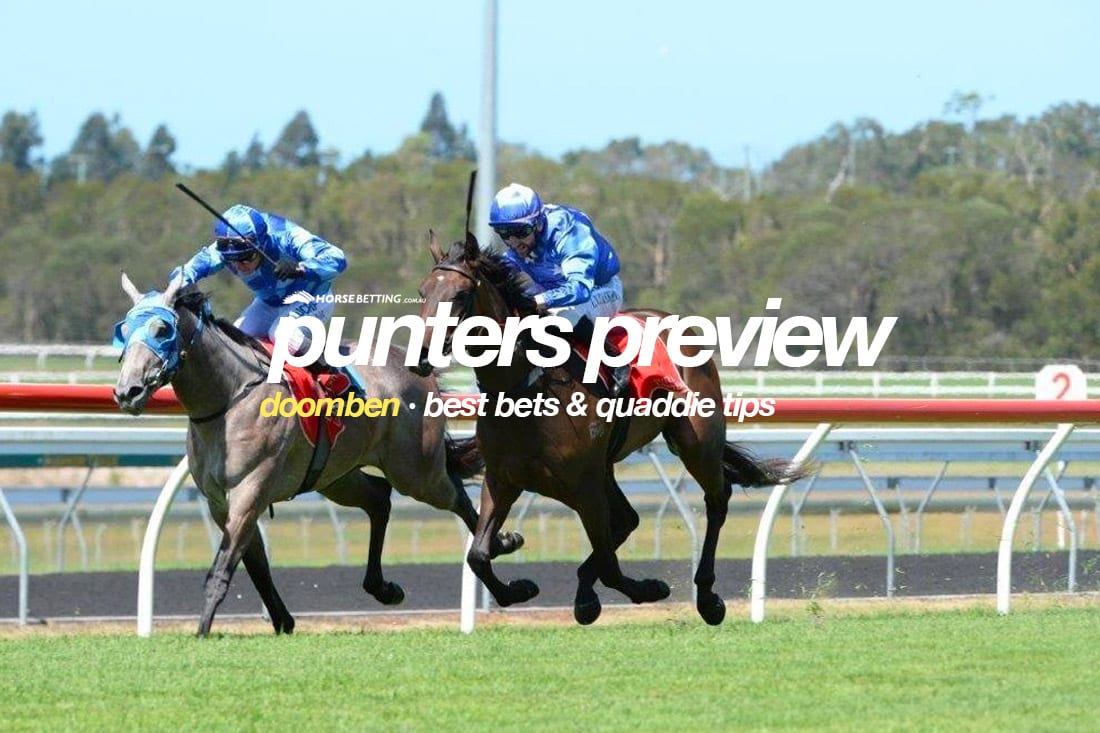 Eight metropolitan races will be run and won at Doomben on Wednesday, so HorseBetting’s Queensland racing analyst has picked out his best bets and quaddie numbers for the day. The track is currently a Soft 7 due to persistent rain from Monday afternoon onwards, while the rail is out 7m for the entire course. The first race is set to jump at 1:38pm AEST with the running of a 2YO Colts & Geldings Maiden Plate.

We are siding with a debutant on Wednesday, as the Steven O’Dea & Matthew Hoysted stable saddle up She’sgottheboom. The two-year-old filly has had two trials in preparation for her debut run, finishing third under a tight hold at Deagon on January 25, before winning her most recent trial by 5.3 lengths at the Sunshine Coast on February 8 in very impressive fashion. The in-form Boris Thornton will ride this daughter of Spirit Of Boom, so that is a huge plus, while he has also had the chance to build a relationship with the filly having ridden her in both trials. Drawn ideally in barrier four, She’sgottheboom will be either leading or in the first three of four horses, before we expect her to pull clear in the concluding stages.

In the first leg of the quaddie, Little Miss Pixie will be looking to win her first run for her summer campaign, when she lines up in a Benchmark 68 over 1350m. The four-year-old mare has had four runs this time in, finishing second twice and third twice when not beaten far on either occasion. The daughter of Spill The Beans ran third at this track and distance on January 12 when finishing behind Harlequin Field and Mystic Aroma. Tony & Maddysen Sears took her to Ipswich a fortnight later and she ran third again over that same distance when a well-backed favourite. She is now fifth-up for the campaign, so she should be rock-hard fit, while she also gets a nice weight drop and has drawn beautifully in barrier six. Jim Byrne goes on for the first time this preparation which is an advantage, given he is leading the Queensland Metropolitan Jockeys’ Premiership. This looks a good race for Little Miss Pixie.

Matt Kropp and Samantha Collett team up in the penultimate race with four-year-old entire, Calm Seeker. The son of Complacent has always shown some ability, so much so, his trainer sent him around in the Group 1 Queensland Derby during the Brisbane Winter Carnival. Although he didn’t beat a runner home that day, he returned to the track in December and won a trial nicely, before going to the races and winning at Toowoomba on December 18 by just under a length. He finished a couple of lengths off his rivals at his next two starts, and then ran much better at Toowoomba on January 29 over 1625m, hitting the line nicely to run third. He stays at the mile (1640m) and finds himself in a very winnable race. Collett is riding brilliantly at the minute, so her services can get this horse home across the line first.