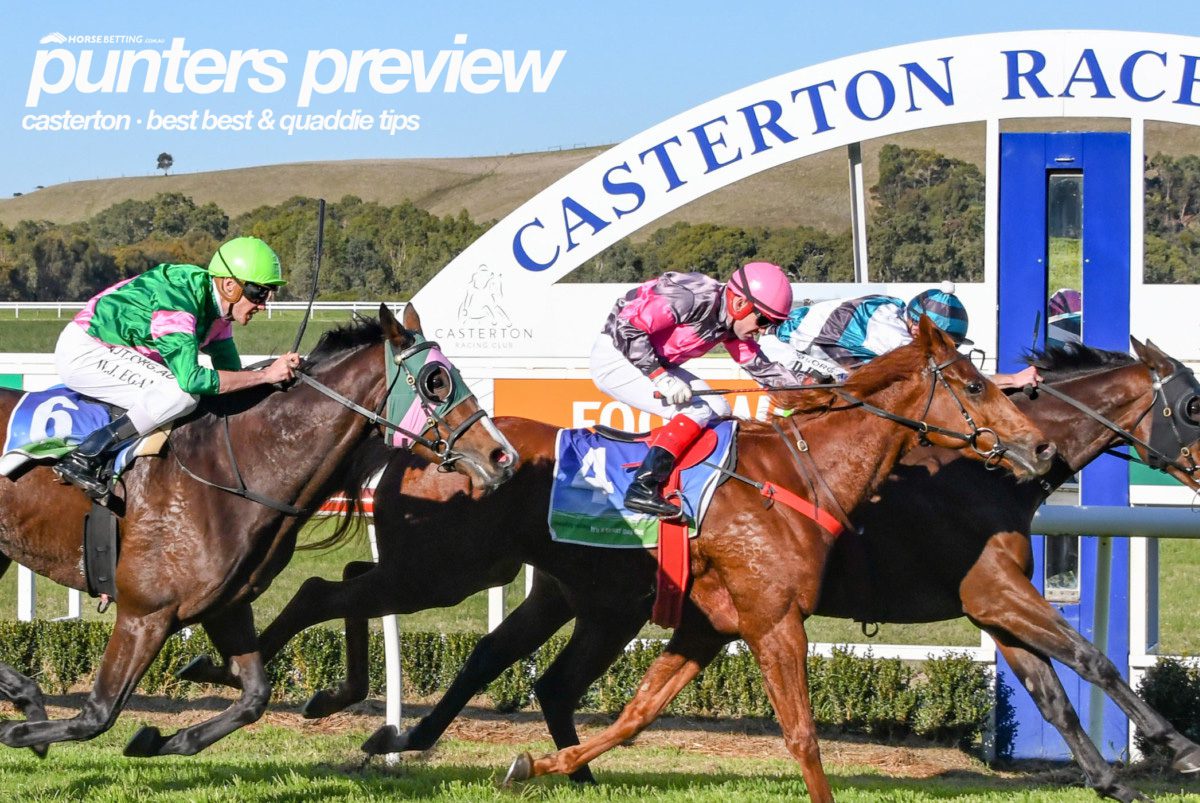 It is Casterton Cup Day when Casterton Racecourse hosts a bumper nine-race card this Sunday afternoon. Horsebetting’s Victorian form expert has gone through the card which includes four jumps races to kick off the card.

We’re racing on a Soft 5, with the rail in the true position throughout, for the meeting getting underway at 11:50am AEST.

The Casterton Cup is the feature event on Sunday afternoon and we’re hoping the Ciaron Maher & David Eustace-trained Lorente can bring up a fifth career win, almost 12 months after his last success. The five-year-old gelding looks to be the one who will settle outside expected race leader Feargal, a role he is more than familiar with. Two runs back he wasn’t beaten far by Upswing at Sandown and if he can reproduce that type of effort here, we expect the Fiorente gelding will take some catching. He has two wins from three starts on rain-affected going, so should it be a track you can get your toe in, Lorente looks a great bet in the Casterton Cup. The $10 on offer from online betting sites is appealing.

Our best bet of the day comes up in the Open Hurdle event, when Grand Annual winning combination of Steven Pateman and the Maher & Eustace stable team up with Roland Garros. The seven-year-old gelding had put in two dominant trial victories before getting smashed by Brungle Bertie in the JW Hurdle at Pakenham on April 18. He is now four weeks between runs and with the little freshen-up looks a clear best bet of the day as long as he shows a clean pair of heels over the obstacles. Five of his seven career wins have come on rain affected ground and as long as he jumps clearly, Roland Garros simply does not look like getting beat. The $3.20 with Bet365 is a great price to load into for jumps fans.

The Patrick Payne-trained Miss Devine Em managed to pick up a gritty victory in BM64 company at Mildura on April 26 and we anticipate she can do so once again on Sunday. It is hard to knock her racing pattern, settles in the first four on a regular basis and offers a kick in the home straight. From barrier six with plenty of speed drawn underneath, look for Christine Puls to have the Super One mare settled in the one-one throughout. She may not have an electric turn of foot, but with potentially vulnerable leaders in front off her, we expect Miss Devine Em to pounce and bring up a fifth career win.