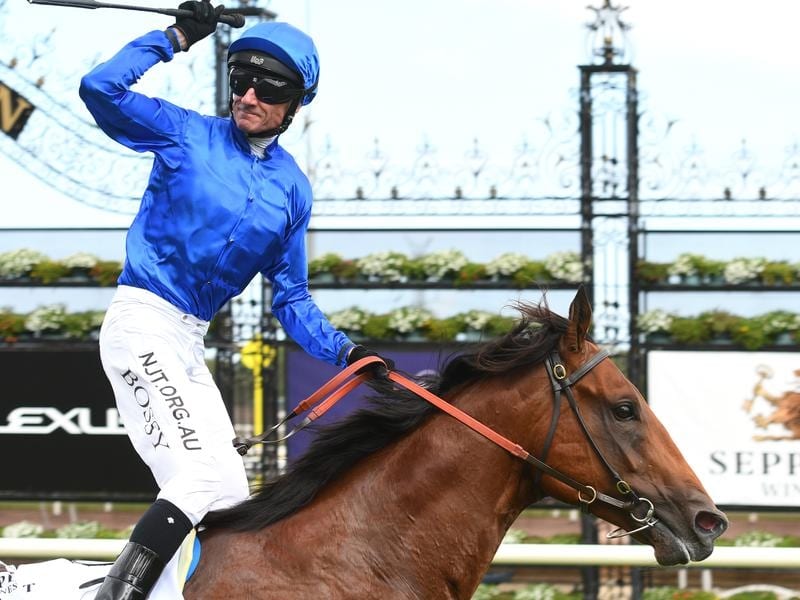 Godolphin star Bivouac has emulated his sire in winning the $1.25 million Newmarket Handicap.

In a season of outstanding three-year-olds, Godolphin colt Bivouac has stamped himself as possibly the best with a explosive victory in the Newmarket Handicap at Flemington.

Bivouac emulated the feat of his sire Exceed And Excel who won the race in 2004.

“It’s an elite crop of three-year-olds. He’s at the top of them and it’s very exciting that we can own him,” Cox said.

“He’s one of three Group One-winning sons of Exceed And Excel in a very a good crop of three-year-olds and to win as dominantly as he has in a Newmarket Handicap, I think is very special.”

Cox indicated Bivouac would head to Sydney for Group One T J Smith (1200m) at Randwick on April 4 while a tilt at Royal Ascot, this year, was unlikely.

He said trainer James Cummings and the Godolphin team had considered taking Bivouac to Royal Ascot last year for the Commonwealth Cup.

With Godolphin holding a slot in this year’s edition of The Everest at Randwick in October, Cox said Bivouac was, at this stage, a leading contender for that 1200m race.

“The T J is a weight-for-age six-furlong race and an obvious target for him, but we’ll sit down and have a yarn about him,” Cox said.

Boss said Bivouac had the race won a long way from home, saying it is rare that you walk away from quality opposition with such an easy victory.

He said the victory was redemption after riding Cascadian for Godolphin at Randwick last week, a loss that resulted in Boss being suspended for careless riding.

“To be able to get myself on the back of this colt and feel the power and feel the speed, it was just immense,” Boss said.

“Thanks to James, we had a really good chat this morning, he put my mind at ease and these are the moments we live for.

Ciaron Maher, who trains runner-up Loving Gaby in partnership with David Eustace, was left frustrated with the filly’s third Group One placing in a row, but proud of the three-year-old’s performance.

“She seemed to pull up really well, no excuses, but the other horse was better on the day,” Maher said.

“She’ll probably now go to The Valley, back to where she was able to break through and win her Group One, so back around a bend she might be just that little bit more at home.”