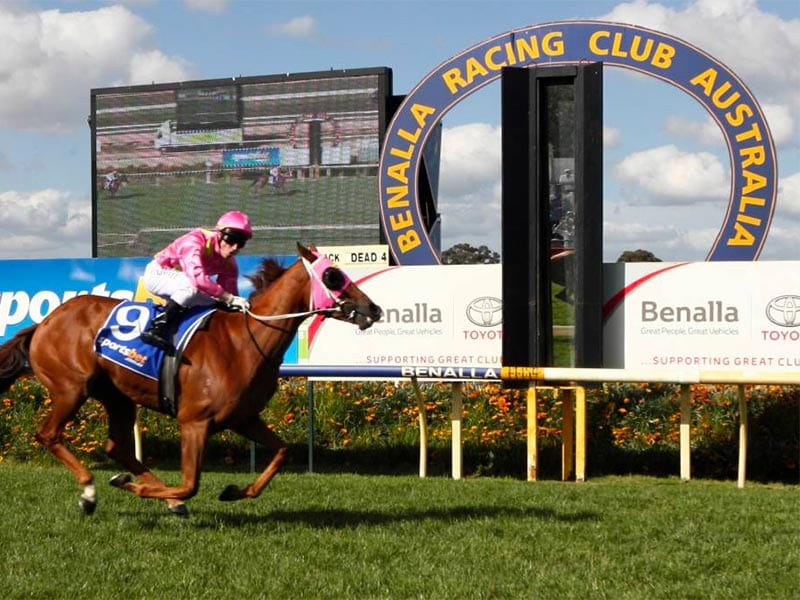 Racing returns to Benalla for the first time since April 9 and Horsebetting’s Victorian horse racing form analyst brings you his best bets, top odds and free quaddie selections for the bumper nine-race card. The track is rated a Soft 5, with the rail in the true position for the meeting commencing at 12:30pm AEST.

Our best bet at Benella comes up in the opener when the Andrew Noblet-trained Isles Of Avalon steps out over 1106m resuming off an 18-week spell. Despite the majority of her rivals experiencing race day conditions for the first time, the three-year-old Toronado filly was competing in harder races than this maiden affair during her initial campaign. She went within a head of claiming the Listed Dequetteville Stakes on debut, before being beaten just over a length in the Group 3 Breeder’s Stakes at her subsequent start during the Adelaide Autumn Carnival. From barrier 12, she will need a little bit of luck early on, but with Will Price on board we expect him to find a spot midfield with cover. If she can replicate a similar effort from her first two runs in Adelaide and translate it to here in Benalla, she should be simply too good for her rivals.

Next Best at Benalla: Fast Sagrado

We will be looking to bookend the Benalla card when the Ben and JD Hayes-trained Fast Sagrado steps out in the last, looking to build on an impressive start to his career thus far. He is yet to finish outside of the top three in three career starts to date and if his win two starts back at Warracknabeal on July 25 is anything to go by, he may be horse worth following as he continues his rise through the grades. Despite being well beaten in second at Wodonga last time out, he was hitting the line strongly and the extra 100m as he steps up to 1206m should suit him perfectly. With speed drawn to his outside, he should get a cart across the field and be able to find cover one off the fence and with a sharp turn of foot should be too hard to hold out once more.

In the second leg of the quaddie, the Leon and Troy Corstens-trained Brasada steps back to BM58 grade following a midfield effort at Geelong on July 16 behind Diaquin. Diaquin has since come out and won at Sandown last week in smart fashion, suggesting the form may not be a bad one to follow. He went within a whisker of beating Feuermond at Geelong the start prior on July 2, before peaking on her run late to finish second. Considering he has been racing in tougher races than this, we anticipate the 3kg claim from Kiran Quilty to be crucial getting him in with 61.5kg and being close to the speed to be the winning combination at a nice price.