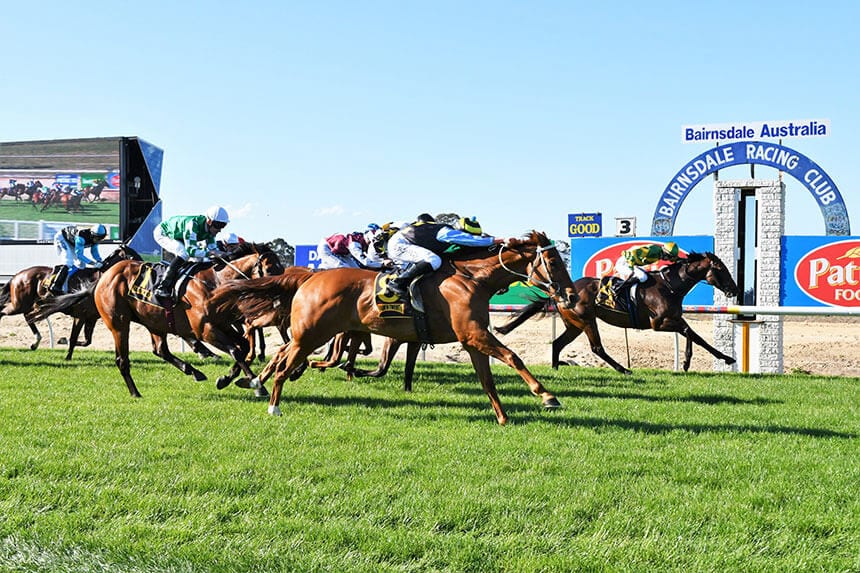 Racing heads to Bairnsdale on Monday afternoon for an eight-race card and Horsebetting’s Victorian form analyst presents his best bets, free quaddie selections and odds from Australia’s leading online bookmakers. The track is rated a Heavy 8, with the rail in the true position, for the meeting commencing at 1:30pm AEDT.

Our best bet of the day comes up late on in the card when the Andrea Leek-trained Saying steps out in the third leg of the quaddie over 2200m. Despite needing to lug 63.5kg on a Heavy track, we expect his form from his past two runs to stack up against a BM58 field that is certainly not the strongest. The seven-year-old son of Savabeel was a comfortable winner at Traralgon two starts back, before going down in the shadows of the winning post at Moe last time out on November 8. From barrier seven, we expect Patrick Moloney will roll forward and look to get Saying settled in a prominent role, where he can have his mount moving at a sustainable speed. If he can do that and is not required to produce a sharp turn of foot on the back of a tough 2200m affair, he should be simply too good for this lot.

The reliable duo of Peter Galagotis and Tianni Champman are set combine with Margaret’s Banter who is looking to break her maiden at start three when she steps out over 1000m. The three-year-old filly draws barrier one here and with Chapman’s 3kg claim we expect the apprentice will have the Hvasstan filly settled on the leader’s heels which tends to be a big advantage at Bairnsdale, especially with just 53kg on her back following the claim. In an event that is expected to be run at a genuine tempo, the leaders should be left vulnerable late for Margaret’s Banter to peel off their back and ultimately finish right over the top of her rivals.

Best Value Bet at Bairnsdale – One For Rocky

We will be hoping to round the day at Bairnsdale a winner, when the Lenny Xuereb-trained One For Rocky steps out over 1600m. The seven-year-old son of Sharkbite won at a similar price at Kyneton on the back of an intuitive ride by Liam Riordan on November 12. It is always a big watch when a horse backs up on a three-day backup and if he can replicate a similar effort at Bairnsdale, he should be running a cheeky race at a price. His win at Kyneton was on a Heavy 8 as well and when Riordan went for home a long way out, it left his rivals flat footed and if Riordan does the same here, One For Rocky will take some catching.