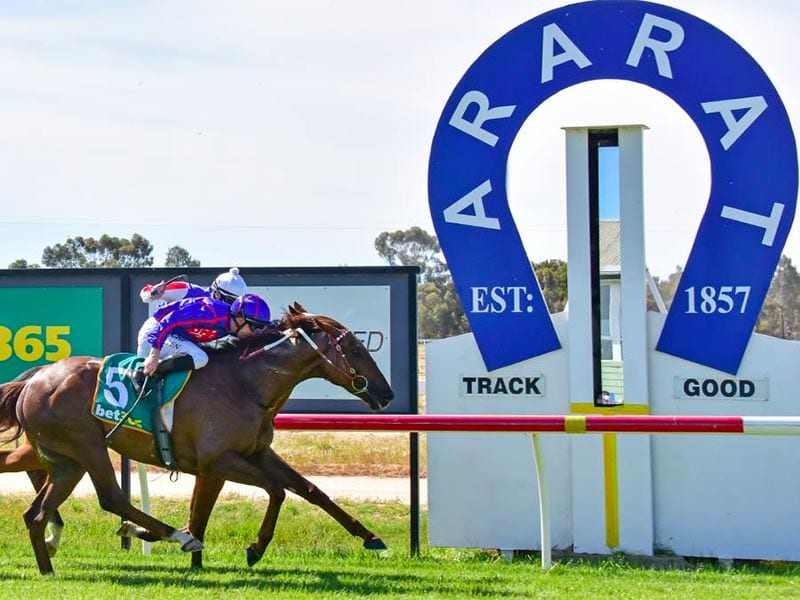 HorseBetting’s Nicholas Lloyd brings you his best bets and quaddie numbers for the eight-race card at Ararat on Sunday, including top selections in both the Ararat Gold Cup and Ararat Bowl. The track is rated a Soft 5, the rail is in the true position, and the first race is set to jump at 1:15pm AEDT.

Paul Preusker and Declan Bates combine with race favourite Orleans Rock, who is looking to add another country cup win to his resume. The six-year-old gelding was a dominant winner of the Horsham Cup on October 17 over Think We’re Due and Kings Full, with the former going on to run fifth at Flemington on Tuesday. This son of Rock ‘n’ Pop does drop back from 2100m to 2000m on Sunday and rises 1kg to the 55kg, but his win at Horsham was so arrogant that we see no reason to jump off. Bates should get a good run from barrier six and be able to peel off them late and prove too good again.

In the Ararat Bowl, Alisa Hinch saddles up her consistent gelding Drop The Mic. This five-year-old son of Your Song has been in the money on 13 occasions in his 22 career starts, while he hasn’t been out of the quinella in his past five. Last time out, Drop The Mic won comfortably at Echuca by 1.75 lengths with a big 63.5kg on his back. He drops 9.5kg here to 54kg and gets the services of Blaike McDougall, who will have plenty of confidence after riding two winners at Flemington on Melbourne Cup Day. The five-year-old is likely to get back from barrier 10, but the form he is in suggests he can run over the top of them late.

Race four sees stayers get their chance in a 3800m Benchmark 70 where a few will likely push on to the Jericho Cup. Ciaron Maher & David Eustace are no doubt the best trainers of staying horses in the country, and they saddle up the short-priced favourite here in Heberite, who comes off a dominant display over 3100m on October 14 at Warrnambool where he led all of the way and won by 2.5 lengths. This seven-year-old is a winner over the jumps as well, so we know he will stay. Dean Yendall has a good record in the bush, so his booking is a plus, while barrier six should see the son of Raise The Flag get all of the favours out in front. He will take some running down at the end of 3800m.

The final race of the day is a competitive Benchmark 64, and one that has slipped under the radar is Brian McGrath’s six-year-old Inkslinger. The son of Akeed Mofeed won very comfortably when first-up at Kyneton over 1112m, while the post arrived a touch too soon over 1000m at Moe last time out when third behind Yulong Defence and Arroance, with the latter then going on to win at Mornington on October 31. Inkslinger now rises in trip back to the 1100m, which is going to suit him down to the ground, while he also goes from a bottomless Heavy 8 to a more suitable Soft 5 surface. From barrier nine, Matthew Allen will likely get back on the gelding and get him to the outside in the straight, which will give him a great chance to run into the finish again. He’s a great bet in the final race on Cup Day.