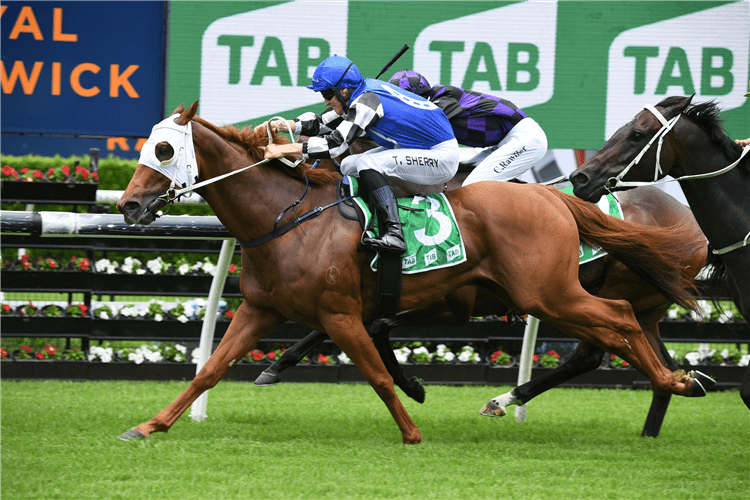 Two more horses have booked their place in the $500,000 Country Championships Final at Randwick on April 2.

Anethole ($9), trained by Cody Morgan, took out Sunday’s $150,000 Hunter & North West Qualifier (1400m) on his home track at Tamworth, a long neck in front of Commando Hunt ($11) who stormed home on the Heavy 8 track to also secure his place in the final for Scone’s Cameron Crockett. After a wide run, favourite Banju ($3.70) was half a length away in third.

Anethole, ridden by Sydney apprentice Tom Sherry, enjoyed a soft run behind the leader from barrier one before being tightened for room coming into the straight. Sherry was able to find the gap, with his knowledge of the horse proving invaluable, having ridden him in three of his previous four starts.

“You have to ride him like he’s the best horse in the race,” Sherry said.

“He jumped very smart. I thought there was going to be a bit more speed than there was coming from the outside.

“Once I did get cover, he travelled beautifully and it was just a matter of kidding to him the whole way in the run.

“He always lets down strong but just for a short period of time. He’s always at his best when I’ve ridden him like that and that’s the key to him.”

After the race, an emotional Morgan was very thankful to Australian Bloodstock for their support and entrusting him with a number of their horses.

“Luke (Murrell) and Jamie (Lovett) have given me such an opportunity in the last few years and I feel like I’ve underachieved for them, I really do,” Morgan said.

“I need to get these results on the board.”

Having to scratch his other top hopes, Edit and Wren’s Day, due to the barrier draw and heavy track, Morgan will look towards the Country Championships Wild Card at Scone on March 20 hoping to secure another spot in the final.

“He’s a real trier, the sort of horse I feel I need to have at !00% at his best to go in the qualifier and then if he was to qualify worry about getting him to the final after that,” Crocket said in the lead-up to Sunday’s race.

“He will have to be at his best and he will, being third up and on the back of two good runs.”

Coming off two good Highway runs this preparation, previous success over the 1400m and a liking for the heavier ground, the Time For War gelding powered home down the outside. After going stride for stride with Banju at the 200m, he pulled clear of that horse but wasn’t able to catch the eventual winner.

Tamworth Jockey Club enjoyed a successful day of racing, and being able to secure champion WA jockey William Pike provided a real coup for the day.

“The fact Pikey has such a cult following is massive for us,” said Michael Buckley, general manager of Tamworth Jockey Club.

And Pike did not disappoint. After three second-placings for the day, he broke through with an all-the-way win on Talbragar ($1.70) in the last, bringing the large crowd to their feet to cheer him to the post and providing Morgan with his second victory for the day.

Talbragar was having just his second start, having also won his first at Narromine last October. The impressively bred four-year-old gelding by Snitzel out of 2013 Golden Slipper winner Overreach blitzed his rivals and could develop into a contender for The Kosciusko later in the year.

The last NSW Country Championship Qualifier is the Western District, which will be held at Coonanble on Sunday, March 13.

Great Buy, trained by Brett Robb at Dubbo, won impressively over 1200m at Mudgee on February 27. With three runs under his belt this time in, he will be primed for the 1400m and looks like one to watch.

The formerly James Cummings-trained Amulet Street will likely be vying for his place at the final on Sunday. The four-year-old Epaulette gelding has had four starts for Dubbo trainer Clint Lundolm, resulting in two wins and two second-placings this preparation. He has placed second over the 1400m distance in stronger company previously, and with a comfortable 1100m trail win on March 4 as well, he could definitely feature in the finish on Sunday.

The Wild Card has many times been the race of the qualifying series. It heads to Scone on March 20 and will be a huge day of racing, with horses and trainers from all over given one last chance to qualify for the highly coveted $500,000 Country Championships Final.